Commentary On Running B3 Palace of the Silver Princess With Adventurer,Conqueror, King As Old School Campaign


"Not long ago, the valley was green and animals ran free through golden fields of grain. The Princess Argenta ruled over this peaceful land and the people were secure and happy. Then one day, a warrior riding a white dragon appeared in the skies over the castle, and almost overnight the tiny kingdom fell into ruin. Now only ruins and rumors remain, and what legends there are tell of a fabulous treasure still buried somewhere within the Palace of the Silver Princess."
This is pretty much all it would take to lead a party of adventurers, and outlaws to their doom to a ghostly kingdom that appears when certain strange signs appear in the sky. 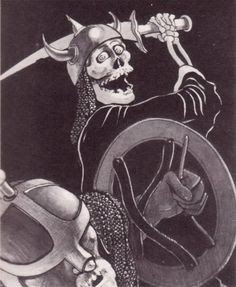 I've been thinking about reskinning Palace of the Silver Princess as a Adventurer, Conqueror, King adventure piece with a spin towards the alignment of the gaming system working in the favor of the fairy tale like atmosphere of B3. I want to concentrate on the Moldvey version of Palace of the Silver Princess. I'm thinking of running it as Return To The Palace of the Silver Princess instead of the usual set up.  No I'm doing a D20 version of it. Instead I'd take more Michael Moorcock approach to the Silver Princess, Haven becomes a place locked out of time and space, the forces of chaos have been unleashed. The wizard is someone taking full advantage of the plot using it to establish his own other dimensional domain hellscape. The wizard might be from Hyperborea, the leader of a powerful faction of a  Lovecraftian chaos cult. I'm still tossing this around in my mind but the events of the Palace could recycle themselves over and over again. This makes Haven & its environs a weird pulpy sword & sorcery location with lots of old school potential. 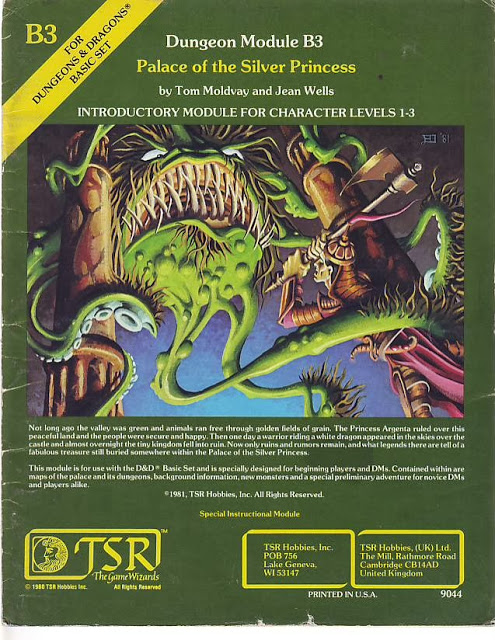 This isn't the first time I've run this adventure, the last time I used Astonishing Swordsmen & Sorcerers of Hyperborea.
"The plot of Palace of the Silver Princess revolves around a country frozen in time by a strange red light. The only seemingly unaffected location and the apparent source of the glow is the royal palace. The adventurers must restore the flow of time and save the country."  I slowed the corrupting nature of the red light last time and perhaps I can up the dark fairy tale aspect of B3 this time. Several of the optional magic systems that I've been reading in Axioms magazine fit this style of dark fantasy fairy tale. Arik of the Hundred Eyes patron of Forbidden Secrets & the Lost sounds like he's straight out of a Dungeon Crawl Classics adventure. It under his influence that the kingdom has become anchored in time & space. Parts of the module could be crossed over into the recent Free  DIY revamp of B3 Palace of the Silver Princess to give the whole affair a much more Lamentations of the Flame Princess feel. The forces of chaos seem hell bent in taking down the foundations of the kingdom down from the inside out. This speaks ACK's alignments and take on the forces of chaos. 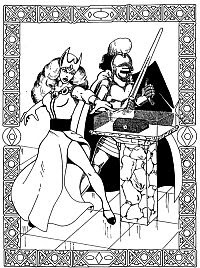 The question becomes with the focus of Adventurer, Conqueror, King would the PC's try to take the kingdoms of  the Silver Princess module  for themselves? The defeat of the main menace in Palace of the Silver Princess might set things up for an entire mini campaign of domain sword and sorcery warfare?!
This could be the route that I want to take for a beginning adventure into my own take of Adventurer,Conqueror, King. More as this develops.
Posted by Needles at 10:16 AM