Imagine that your PC's are trailing once of the worst criminal masterminds down into the depths of the Earth or Greyhawk into an alien and strange world of the Drow.  Eclavdra is up to no good and cutting a bloody swath through her underworld and the PC's are going to be in over their heads. 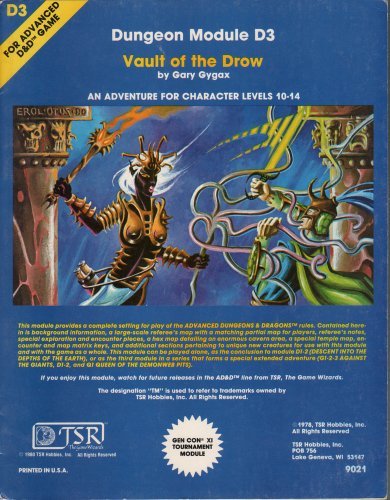 As a member of a bold party of adventurers, you and your associates have trekked far into what seems to be a whole underworld of subterranean tunnels -- arteries connecting endless caves and caverns which honeycomb the foundations of the lands beneath the sun. Your expedition has dogged the heels of the Dark Elves who caused great woe and then fled underground 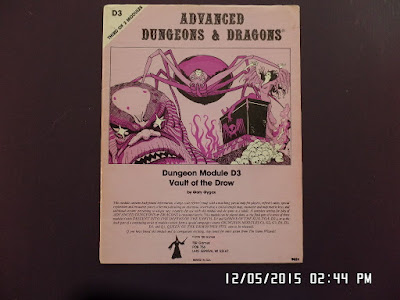 Vault of the Drow by Gary Gygax is only twenty pages long and finishes up the Descent line of modules . This module scares the hell out of me, its for eight to ten players of at least tenth level. It represents an entire campaign outline on its own and its one that I'd saved from an apartment fire ages ago. This module is one of the best pieces of writing that Gary Gygax did, the descriptions are lush and fill in a dark fairy land of weirdness and alien culture scattered throughout the module. This module assumes that the PC's have made it through the events of D series already and have made their way to the gates of the Drow city of Erelhei-Cinlu.

For me they don't come any more iconic then Vault of The Drow because it makes the Drow city a location that simply comes alive filled with memorable NPC's, harrowing encounters, and deadly factions all fighting to cut your PC's throats. The imagery is stark, the writing bold, and the descriptions come alive for the PC's and this is a monster of an adventure in every single sense of the word. When this came out it was campaign primer and part adventure, the Drow were an unknown quality except for brief mentions in the Fiend Folio and intricate backhanded descriptions in the Giant series. Here we get a fully fleshed out piece of work that details an entire region of the Drow's underworld, its part Journey To The Center of the Earth and part tourist primer into the bowels of an underworld that takes the PC's into the heart of a twisted dark fairy tale world. D3 has some major problems in terms of motives for Eclavdra, preparation time on the dungeon master's part to make this adventure work, and a great deal of commitment on the player's part into the motives and world of the adventure. But on the whole with a ton of work it not only works but can become the backbone and support of an entire campaign.
Not at all bad when you consider that it is only thanks to Gary's masterful descriptions, memorable locations, and great monsters that Vault of the Drow works and is the best in the 'D' series. 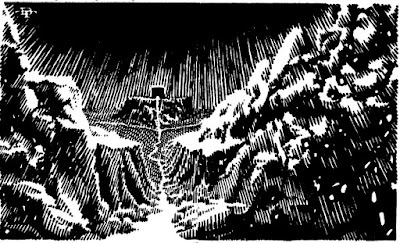 So where might one place the Drow city of  Erelhei-Cinlu if one was running Vault of the Drow in a Lamentations of the Flame Princess or Dark Albion style of campaign? Well, given all of the events of Giant series? I would place it directly under Romania or Russia possibly about the Thirteen Hundreds to Fifteen hundreds given the amount of history of the regions and the incredible breath of myth and legends surrounding these countries & the Giant series this makes sense.  You have two gods struggling against one another in  Erelhei-Cinlu, an ancient Drow city filled with the stuff of nightmares. You've got lawful & chaotic factions of Drow struggling below the Earth while  Eclavdra calls the tune and is trying to set up a sock puppet kingdom above giving her the ultimate in backing on the surface. Dragon foot has one of the best reviews of this module with threads on its use and short comings. That's right over HERE
Let me completely clear here there's no misunderstanding, these are the Drow of the Seventies here. They are completely and utterly evil with each and every other race around them hating their guts and they really deserve each and every piece of hate that comes their way. They don't have hearts of gold wrapped in a sugary sexy fetish wrapping. These are the bastards of nightmare and horror whose underworld city is like something out of HP Lovecraft coupled with a Giger painting and they're out to kill each other and enslave you if possible. They worship demon gods and are completely despised by each and every race around them. They deserve all of this and more. 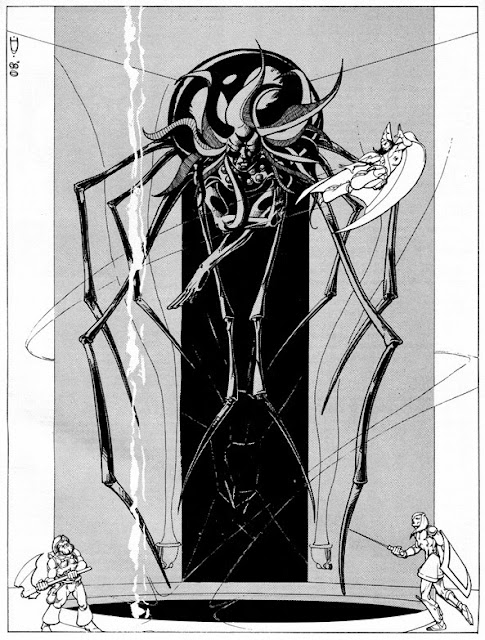 This module makes an excellent adventure resource for the Underborea of Astonishing Swordsmen and Sorcerers of Hyperborea, it presents an alien society that can and will conquer those around them. This is a completely alien society with a number of high level factions that will work for and against the PC's and those around them. I have used HP Lovecraft's gods in place of certain dietes in this module and it works on a number of levels. Dungeon masters might want to trim back the treasure and certain magic items or switch out the AS&SH loot to make things work a bit better. The party will encounter the  mezzodaemon and nycadaemon for the first time in this adventure and they can really ruin a party's day. There are a lot of TPK moments scattered throughout Vault of the Drow and the adventure assumes the PC's are smart enough to handle themselves against the horrors that they will encounter. The dungeon master is going to have to balance these encounters and incidents with the heart and soul of Vault. This isn't a bad thing, if working with the AS&SH book the DM is going to have to work hard to make sure that the back bone and spine of the sword and sorcery action keeps up with the dangers of the encounters. Drow can and will work with AS&SH but they should remain very,very, very, rare in the confines of the game. Erelhei-Cinlu is the exception and not the rule of adventure locations. 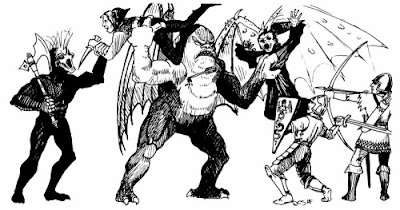 D3 provides dungeon, wilderness, and urban adventuring all within the confines of an under world location with lots of challenges, factions, and more to torment and terrorize players
There are several reasons why Vault of the Drow remains very vital and iconic to OSR gaming:
What a number of friends have mentioned to me about D3 is that perhaps the city of  Erelhei-Cinlu is there to help keep the further horrors and demon gods of Underborea from destroying and consuming the souls of the Drow empire. The original intention and creation of the city is there act as a safe guard against the dangerous and terrible horrors that lurk just below making the machinations of Eclavdra and her cults all that more dangerous. Over the years several of Eclavdra's cults have sprung up across the face of Hyperborea and the terrors that they visited upon the land had to put down and destroyed. Many times this almost seemed like the central theme of Vault of the Drow that conflict and unrest were tied into the heart and soul of adventure. Vault of the Drow remains a classic for solid reasons and despite its flaws is still one of the gems of my gaming life. This makes the D series a favorite of mine and its been great looking back at these classics of TSR and how they're still relevant even today. 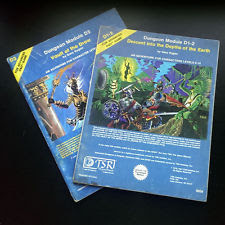 Email ThisBlogThis!Share to TwitterShare to FacebookShare to Pinterest
Labels: Advanced Dungeons and Dragons 1st Edition, Adventures, Astonishing Swordsmen and Sorcerers of Hyperborea rpg System, Descent into the Depths of the Earth, Gary Gygax, Reviews, Vault of The Drow