"Tired and sore, you struggle over the burning sands toward the long-forgotten city. Will you reach the place in time to save yourselves from the evil efreeti? The sun beats down, making your wounds stiff and worsening the constant thirst that plagues anyone who travels these waterless wastes. But there is hope - are those the ruins over there?" 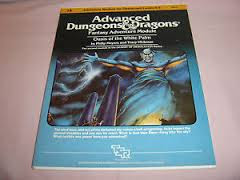 So my little corner of Connecticut got hit with a pretty good mix of snow & crap yesterday. I spent most of the day shoving my eight hundred & fifty foot drive by hand hence why this blog entry is late. But some corner of my mind has been busy at work thinking about the next portion of my Ancient & Accursed Terra adventure locations after speaking with friends the other night. The second part of 'I' series of modules is I4 Oasis of the White Palm (1e) By Tracy Hickman & Laura Hickman. This adventure was heavily modified by me for a group  players back in 2013 and the Oasis became Iram of the Pillars- Iram of the Pillars (Arabic: إرَم ذات العماد‎‎, Iram dhāt al-ʿimād), also called "Aram", "Irum", "Irem", "Erum", or the "City of the tent poles," is a reference to a lost city, country or area mentioned in the Qur’an & the writings of the Lovecraft circle. 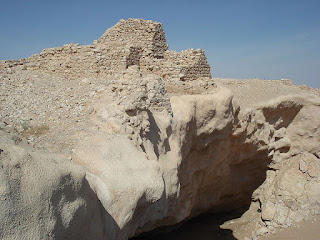 It was originally  a city of the cloud giant hybrid rulers but was struck by dimensional weapon from the Nameless City before vanishing across the planes. The PC's had to recover a mad wizard's journal which had an incantation in it based upon this little tid bit ;"Another identified source is the 9th Edition of the Encyclopædia Britannica, whose description of "Irem, the City of Pillars"  Lovecraft copied into his commonplace book: "which yet, after the annihilation of its tenants, remains entire, so Arabs say, invisible to ordinary eyes, but occasionally, and at rare intervals, revealed to some heaven-favoured traveller." "

The reason why I've been thinking about using I4 with Adventurer, Conqueror, King is the numerous opportunities for role playing & interacting with notable NPCs had been an important element of  classic era TSR adventures since at least T1: "The Village of Hommlet" (1979), but the idea of political differences being a focus is a part of I4. The PC's have the opportunity to build alliances, forge new in roads, and build up the ranks towards domain play. There's also the opportunity for a Lovecraftian twist.There are plenty of opportunities within I4 to expand upon the various cults of the adventure to create your own  in roads for various other adventures later on. "In Oasis of the White Palm, the PCs arrive at the Oasis of the White Palm, which is on the brink of turmoil. Shadalah, who is to be the bride of the sheikh's eldest son, has been kidnapped. The sheikh believes her to be held by his enemies somewhere in the oasis" Behind the plot is  my version of Ghazia an old public domain jungle comic book character that I heavily modified. Ghazia was a Terran  7th level priestess & witch  who worshiped a vulture headed demonic aspect of the Black Pharaoh. She has deep ties with the Cthulhu Cult that uses the lost city and its environs. This also ties back into " the mystery before the PC's can progress further.[3] Once the characters make the contacts they need at the oasis, they continue to the temple of Set and the crypt of Badr al-Mosak, and the adventure concludes in the city of Phoenix; there, the PCs must obtain the three Star Gems (the one from Amun-Re's tomb in the previous adventure and two more introduced here) and free the djinni if they plan to move on to the next module." 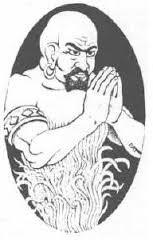 The complicated bit is balancing both cults, plus the weird adventure aspects along with the traps, tricks, and adventure locations with Oasis of the White Palm especially within the  temple of Set and the crypt of Badr al-Mosak. Even though the PC's had made it this far & had gone up levels there were certain traps that really rattled the players such as the Pit of Everfall which took out three PC's in one go. This was a trap that echoed something straight out of Indiana Jones. 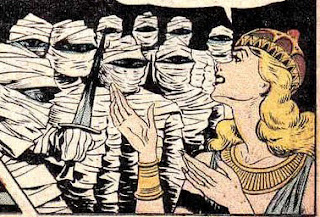 The PC's had picked up vital clues within The Lost City (B4)  by Tom Moldvay. Even though this was a black powder era style pulpy adventure, guns did not make that much of a difference. Alliances, role playing and politic seemed to get the party much further. This wasn't strictly a sword and sorcery adventure. This was an OSR hybrid with bits and pieces of several systems in play. 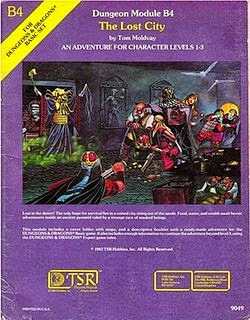 The introduction of black powder weapons was a really big deal for one or two of the players who thought it gave some great advantage to the characters within the system. I've run a number of Lamentations of the Flame Princess games along with various old school campaigns and in my experience black powder is far more a liability then a hindrance  for game play. This is one of the reasons why Guns of War from Adventurer, Conqueror, King is on the table for this style of pulpy adventure. 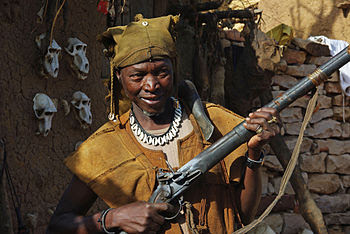