Well I'm  sucker for a great cause & each year I look for a twisted Christmas theme to run. Well it looks like I've found it! Santa is Dead is an old school D&D themed adventure that takes its twisted themes of Santa Claus back down to its mythological roots & then turns the blender on eleven. All of this is for a very worthy cause with the proceeds from this 'pay what you want' title going to the Ehlers-Danlos society  Find out more about the great work it does here: ehlers-danlos.com 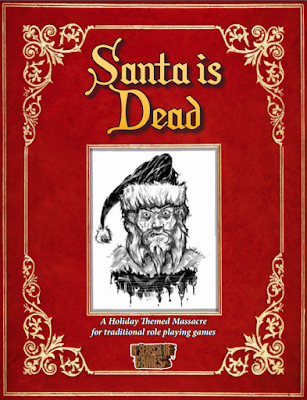 So this is a for charity adventure but can I use it with my favorite retroclone system  or other old school version of Dungeons & Dragons? Well  Santa is Dead can be used with Advanced Dungeons & Dragons 1st edition,B/X D&D, OD&D or your favorite D&D incarnation with some adaption. Santa is Dead was written for The Lamentations of the Flame Princess rpg system. Everything from starting PC motives, to equipment is included for player characters in the opening chapters. Everything is laid out for the players and DM right from the get go. 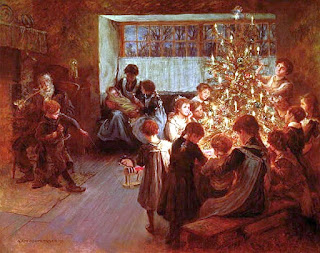 Chestnut just before the events of Santa is Dead.
at least in my mind. No this isn't the artwork from the adventure.
The plot is a sort of pseudo 'Christmas from Hell' theme wrapped around the invasion of a sleepy small town  called  Chesnut by something & its minions that used be an ancient power from beyond the pale of mankind's greatest fears. Its a hell of a ride with some awesome artwork, cartography, and twisted themes. There's some seriously messed up stuff happening in Chestnut!!? The town is in deep Christmas pudding and it needs heroes either from within or without. The place has been invaded & this adventure feels like the Christmas version of Aliens. Try and imagine if this was happening in your home town back about Eighteen Sixty something in Germany. The PC's are thrown into the middle of 'the Awakening' of something terrible!?
"Odin, the Captain, has risen from the grave and murdered Santa. He is bent on bloody revenge and
is destroying everything in his path with the help of his Riders, members of the Wild Hunt. It is up to the
players to stop him (or not) in eight nights.
The Timeline outlines Odin’s actions each night and what will happen if he is not stopped. Because the
Riders are extremely deadly, it is more than likely the party will be involved in a chase at least once during
the game. Both the Timeline and Chase Mechanics can be found in the Resources section at the end of this
adventure."
The above outlines don't even really give a good overall impression of the twisted, dangerous, and horror themed weirdness of Santa is Dead. This isn't a one note pony its an adventure that works on a number of levels from investigative horror, to misery crawl adventure, to balls to the walls horror of a town in the middle of a blood bath. Each of those is hit on one of the Eight days of the adventure. Odin & his forces are terrible and the party is going to be in for a hell of a hot Christmas.
"Father Christmas, Sinterklaas, and Jolly Old St. Nick have been conflated into something new, something uniquely American. Stolen from a myriad of cultures, devoid of anything but ruthless optimism and joy, half remembered bits of Germanic mythos converge into a new being.
Small miracles spawn in the wake of a flying sleigh pulled by reindeer. Small bright bits of kindness, remembering only the giver of winter... forgiving and forgetting the terrible toll of December, the devouring form of midwinter, the savage joy of pursuit, the destroyer, the Hunter...
Such a travesty, this laughing New World oaf.
It cannot be abided.
Wodan Rides."
I can actually see using 'Santa Is Dead' for a Lamentations of the Flame Princess holiday one shot. But I can also see using this as a funnel for a Gothic Dungeon Crawl Classics campaign or as an opener for an OSR horror game.  The theme of the PC's as survivors turned heroes can easily be done. The mythology plays fast and loose but well done.
The gods have been let loose on Earth there is no peace on Earth for good men.  I can see using this with either Labryth Lord or Swords & Wizardry easily.
All in all this is one hell of a ride for an OSR game and those involved have done a bang up job with it. Grab this one for a wicked twist on the Christmas holiday.

GRAB IT RIGHT HERE & TOSS A FEW COINS THE WAY OF A GREAT CHARITY!