I cane into possession of War of Darkness way back in early two thousand something after War & Pieces closed. The module was a high level romp by Mark Perry. It has some nice cartography, a high level plot, and more. But I didn't stick with the adventure's plot. 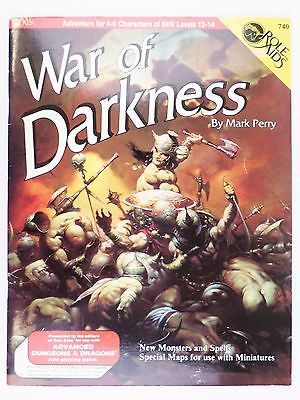 Way back in Eighty Six Mayfair was doing Advanced Dungeons & Dragons adventures including high level ones which brings us to Mark Perry's War of Darkness with its recycled Conan paperback cover. They often seemed to license fantasy artwork from the Seventies & Eighties for their stuff which was fine with me. War of Darkness was kinda weird, wild, and wolly in how it handled itself. This was a high level adventure, Amazon lists it as, 'Adventure for Advanced Dungeons and Dragons for 4-6 characters of skill levels 12-14.' And that's exactly what it is. A high level roiling adventure that pits the PC's straight into the midst of a plane tripping adventure ermm well that's how I played it. Its supposedly an invasion of higher level goblin warriors the creation of Apkieran Lord of the Undead.
There are a bunch of high level PC's to use in War of Darkness, they became the leading scout force of heroes whom our adventurers would pillage for items, treasures, etc. You were also supposed to take any magic items away from the PC's for the war effort you see. Yeah that was going to happen. 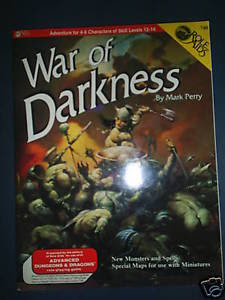 I sure as hell didn't want some upstart demi god demon lord of the undead unseating Orcus whose cult I had groomed since high school to be a major villain in my world. So our high level heroes were off on a plane jumping adventure to this alternative prime material plane. A quick check of the listing of Mayfair product gives War of Darkness a code of May 740. You can find this and more over on this thread on Dragon's foot.
CODE TITLE
MAY 701 Beastmaker Mountain
MAY 702 Nanorien Stones
MAY 703 Fez I: Valley Of Trees
n/a Blasted Land
n/a Kobold Hall
MAY 703 Fez I: Wizard's Vale
MAY 704 Dwarves
MAY 705 Question Of Gravity
MAY 706 Tower of Magicks
MAY 707 Dark Folk
MAY 708 Wizards
MAY 709 Dragons Of Weng T'sen
MAY 710 Fez II: The Contract
MAY 711 Elves
MAY 712 Shipwrecker
MAY 713 Evil Ruins
MAY 714 The Keep
MAY 715 Swordthrust
MAY 716 Deadly Power
MAY 717 Shadows Of Evil
MAY 719 Fantastic Treasures
MAY 720 Fez III: Angry Wizard
MAY 721 Dragons
MAY 722 Final Challenge
MAY 723 Throne Of Evil
MAY 724 Monsters Of Myth & Legend
MAY 725 Fez IV: Wizard's Revenge
MAY 726 Lich Lords
MAY 728 Clockwork Mage
MAY 730 Fantastic Treasures II
MAY 732 Elven Banner
MAY 733 Ice Elves
MAY 735 Pinnacle
MAY 737 Undead
MAY 740 War Of Darkness
MAY 741 Crystal Barrier
MAY 742 Beneath Two Suns
MAY 743 Fez V: Wizard's Betrayal
MAY 744 Giants
MAY 745 Fez VI: Wizard's Dilemma
MAY 746 Monsters Of Myth & Legend II
MAY 747 Witches
MAY 748 Lizardmen
MAY 749 Psionics
MAY 750 A Portal To Adventure
MAY 751 Monsters Of Myth & Legend III
MAY 752 Demons
MAY 753 To Hell And Back
MAY 755 Denizens Of Vecheron
MAY 757 Sentinels
MAY 758 Denizens Of Verekna
MAY 759 Demons II
MAY 760 Archmagic
MAY 763 Denizens Of Og
MAY 764 Apocalypse
MAY 765 Blood & Steel
MAY 767 Denizens Of Diannor

Basically War of Darkness is one of those adventures that your going to have to tailor to your home campaign games. Its got a bit of high level tournament adventure feel to it. It is for Advanced Dungeons & Dragons first edition and I've run it with that system. The PC's went through it like 'Grant Through the South' even with some nasty turns in the crawling aspect of it.
I've also used it with the Stormbringer rpg to run PC's through another plane of the Million Spheres where an upstart demon lord has designs on upsetting the cosmic balance.
The watch word with Mayfair games adventures is adaptability. The ability of the dungeon master to think creatively with these adventures. I've also used War of Darkness with the classic era TSR Marvel Super Heroes campaign adventures Cosmos Cubed as a bridge gap into the cosmic level campaigns. 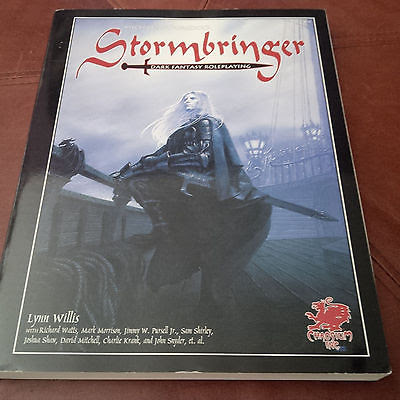 War of Darkness has all of the hallmarks of a TPK if the dungeon master isn't careful to balance as well as pace things with this adventure. There are some really nasty NPC's here along with total tournament style encounters similar to the 'G' series of TSR adventures such as 'Against The Giants' or the Queen of the Demon Web pits. War of Darkness goes for between eight and eleven dollars on Amazon, its a high level adventure with lots of potential for the DM that wants to invest into it as a campaign bridge gap into domain level play which we'll be getting into next time.
Posted by Needles at 10:07 AM