So turn back the clock to about Eighty Two in my small home town of Connecticut. Its a Saturday, I've finished watching the slot of cartoons coming out of New York on cable & wrestling is long over. The trip down to the book shop takes less then ten minutes but its another day of out running bullies, dogs, & neighbors to get to my prize. A brand new copy of Mayfair games Dwarves with its great Dwarven miners cover. There wasn't a whole lot of background on Dwarves in the the Monster Manual or the Advanced Dungeons & Dragons canon. Sure there was plenty within Tolkein & mythology a source that I would later tap into. There were even some other other outside sources other then classic era  TSR products. 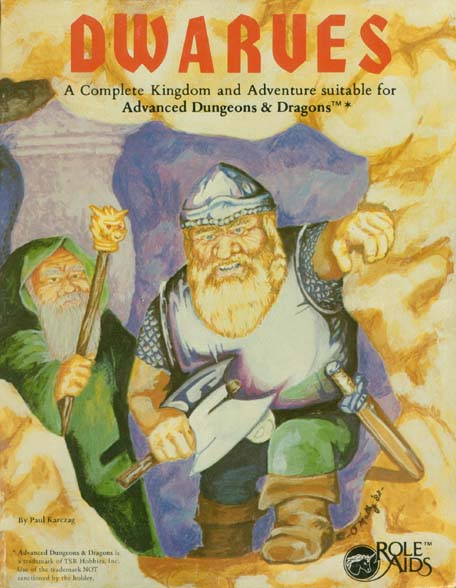 But this one cropped up in the pages of Dragon magazine & even back then I had players who were Dwarven fanatics. Yes even back then the players were often demanding more material & many in the war gaming & D&D community here considered Role Aids an upstart company. Mayfair games was an upstart community & their material was never given the official nod of TSR or Gygax. What's in Dwarves? Well according to the Rpgnet breakdown;"Dwarves is part of the Advanced Dungeons & Dragons-compatible Role Aids product line, and includes a complete kingdom, two cities and three towns, new magic, and an adventure. From the back cover of the revised printing (with eccentric punctuation intact):

Dwarves: the stoutest warriors in the Age of Legend. Herein is recorded their history, gods, cultures, artifacts, wars, magics, mines, traps, and enemies. Includes a guide to the ancient cities of Ostohar and Amor, the village of Fin and featuring, Dwarven Rite, an epic adventure for 4 to 8 Dwarven characters of Skill Levels 5 to 10."

It was written by Paul Karczag who would later on go to write the Dark Folk book. Dwarves has a funny flavor about it midway between Tolkien & some weird mythology. The Dwarves here feature female Dwarves with  beards. The line artwork & layout are primary Eight Two Mayfair. They lay everything out from society, magic, religion, gods, traditions, artifacts, new skills, factions, and a complete city called Oatohar which has a good solid dash of Wagner thrown into the mix of it.  My own original copy of Dwarves was lost to an apartment fire back in Ninety something in Boston. It was replaced by the second edition which has been with me ever since.
Dwarves clocks in at around ninety six pages half of which is taken up by an adventure Dwarven Rite, an epic adventure for 4 to 8 Dwarven characters of Skill Levels 5 to 10. Its a nasty little romp featuring some very weird encounters, solid adventure locations, & several dangling adventure plot hooks that can be exploited for enterprising dungeon masters. Its nothing to set the world on fire but its a good challenge for a band of Dwarven adventurers who are looking for a bit of a romp after dealing with the challenges of the 'D' series. This was the case with me with players who were looking for a domestic Dwarven challenge for the holidays.
The book seems to crop up all of the time on ebay and Amazon; Amazon has it cheap for around ten dollars. It fills a need for those DM's who want a quick drag & drop kingdom of Dwarves in their campaign world. Its not a bad little book at all & fills in the stop gaps for a solid little Dwarven kingdom. That being said, make sure that you check and modify the cultural mores, magic, & brick- a - brack to fit your own campaign world.
Posted by Needles at 9:21 AM