Commentary On Maximum Mayhem Dungeons #3: The Villains of the Undercity By Mark Taormino For your Old School Campaigns 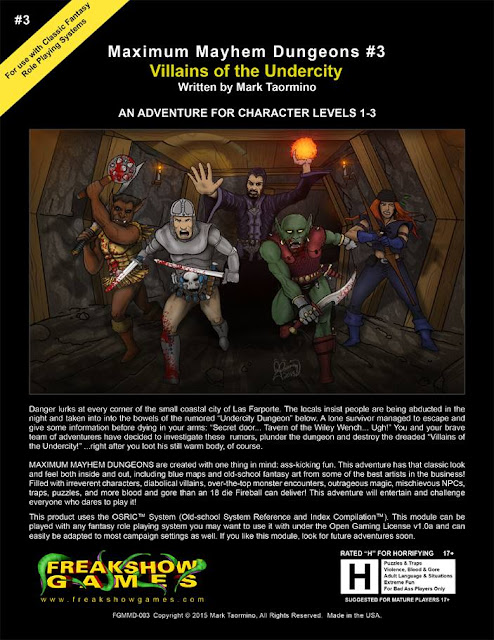 "From left to right, Snoot the Bugbear, Grimley the Warrior, Kreshnar the Mage, Lethos the Lizard Man (with his blade El Duche) and Sunghew the Evil Elvish Warrior, a.k.a The Maximum Mayhem Dungeons #3: Villains of the Undercity"
According to everything I've read through the encounters are up to Mark's usual standards of deviltry and wanton chaos of OSR madness; " 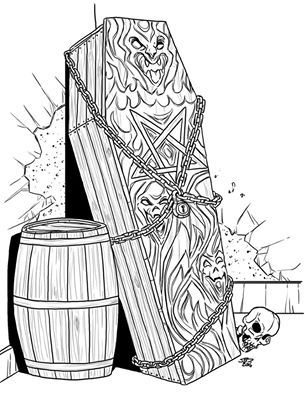 A clip from one of the encounters in my Villains of the Undercity module: "...the casket will burst open and they will find Ajax McKrax - a rugged highlander and mercenary fighter in his mid to late twenties. Ajax doesn’t mess about and could be described as having poor impulse control. With firey red hair and a bloody beard to match his personality, Ajax has a big heart and a badder attitude. He will tell the Players he was captured in the Tavern of the Wiley Wench after calling Snoot the Bugbear “one ugly motherfucker” during a staring contest the two were having over a bet of 15 silver pieces. Snoot had him locked in this casket until he would die. He’d traveled to Los Farport trying to find adventure and has found it..."" 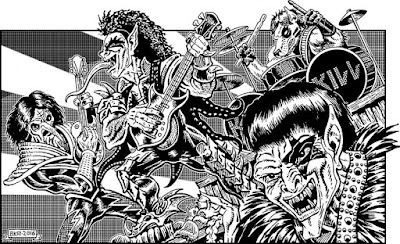 The tone seems to be as weird and deadly as The Hanging Coffins of the Vampire Queen which is solidly OSR according to mark on this one ;"Here is the latest piece of artwork for my upcoming Maximum Mayhem Dungeons #3: Villains of the Undercity module. This is for Snoot's Pit Fight and Rock n Roll Arena Encounter! "...When you enter the large circular chamber it is filled with hundreds of monsters fighting and arguing. You see a huge throne chair at the far end of the room. Sitting on the throne chair on one side of the room is Snoot drooling and wearing fancy golden armor. A four member Rock and Roll band is playing on a small stage composed of a bugbear, a troll, a goblin and an orc. They are wearing crazy black and white eye makeup and have huge shoes. Snoot growls. The music stops and all of the cheering monsters shut their pie-holes and listen quietly. He speaks to you in Common. “I challenge your best warrior to fight my best warrior... the Deathmonger! If you win, I will let you pass and continue your foolish quest. If you lose. You’re dead already!” He laughs a hearty laugh which slowly causes all of the other monsters in the room to start belly laughing. You can see Lethos the green lizard man lean over and whisper something to Snoot. Suddenly a snarling, huge naked Bugbear appears in the Pit wearing nothing but huge metal spiked gloves. It looks like he must be a size 13 shoe. The music starts up again...""
If you don't recall the successful Kickstarter last year the basic plot is like something from the golden age of D&D; "
Danger lurks at every corner of the small coastal city of Las Farporte. The locals insist people are being abducted in the night and taken into into the bowels of the rumored "Undercity Dungeon" below. A lone survivor managed to escape and give some information before dying in your arms: “Secret door... Tavern of the Wiley Wench... The password is... the password is... Ugh!” You and your brave team of adventurers have decided to investigate these rumors, plunder the dungeon and destroy the dreaded "Villains of the Undercity!" Oh but first loot the body, of course. He won't mind... he's dead.

This module is designed for character levels 1-3 and can be played with the OSRIC(tm) system or easily adapted to AD&D, D&D 1e to 5e, Pathfinder, D20 System, Labyrinth Lord, BFRPG, Swords & Wizardry, Warrior & Wizards, etc or any fantasy role playing system you may want to use it with under the Open Gaming License v1.0a!"
So its now coming down to the wire and soon we're going to get a brand new module and it looks to be about as kick ass and gonzo as the other Maximum Mayhem Dungeons. The artwork is right up there with The Secret Machines of the Star Spawn adventure and I can't wait to see what Mark has cooking. 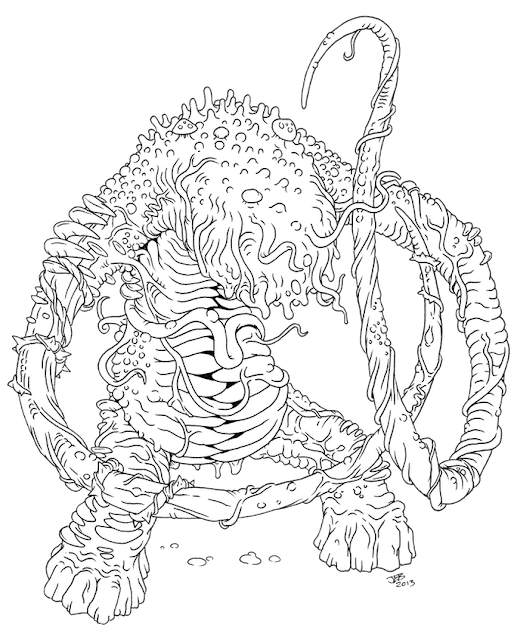