Recently I've been running my players through Keep On The Borderlands, I haven't run through the module for a couple of months because I know it back to front. That is until I really started to look through it again. This time I've been using B2 in a post apocalyptic style Russia of my own design, this is a campaign that I've used as a test bed for some years now. B2 is ideal suited to fit into just this sort of campaign round about. 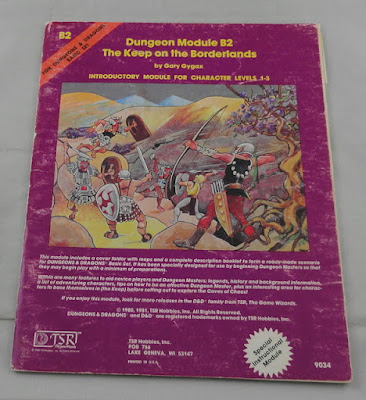 The fact that the Keep on the Borderlands focuses on the Keep far more then it should and that's really a DM's in on this adventure. The fact is that all of the land, resources, magic items, etc. make the keep a perfect target for bandits, adventurers, and outlaws which fits quite nicely in with a post apocalyptic adventure. The keep as bastion of civilization against the encroaching darkness of the wilderness outside. That wilderness is key here to using the keep I think:
Most of all because its  a low-level introductory scenario, which leads the player characters from an outpost on the frontier of law into the forces of chaos it fits the weird blend of post apocalyptic pulpiness and old school sword and sorcery themes that I'm using. 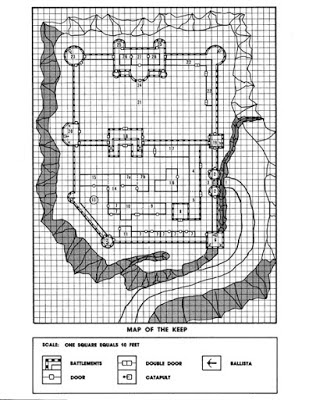 Classics are classic for a reason & Keep on the Borderland allows me as a DM to get the PC's involved in the drama of the plot straight out of the gate. One of the keys to my use of the Caves of Chaos is its ties to the armies of Chaos.
Simply put its because originally the keep was a part of the defenses of the border against the Temple's chaos armies of humanoids. The caverns of chaos is more then simply a slaughter point for humanoids. Its the wells spring that creates the monsters for powers of chaos  from the local human population! Those spontaneous monster generators that James Mishler wrote about might really be the focus for the guardian 'mad hermit' 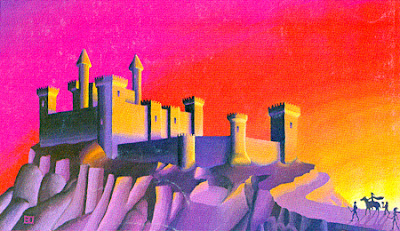 Disposable troops fits into the classic post apocalyptic themes of many fantasy novels and old school gaming ideas. Chaos uses its troops and then quickly disposes of them. This points up one of the classic complaints of B2. The large imbalance of humanoid races in the module, the fact that the wilderness surrounding the keep could not support such a large humanoid population including a minotaur. Well it doesn't have to really they're all disposable troops created by the magics of the Ancients. They're not going to live that long at all but long enough to give PC's all kinds of hell. I've seen several post apocalyptic campaigns where the Temple of Elemental Evil and Hommlet for that matter might be placed on the Germany/ French border the keep could easily be retro fitted into a back location between those two countries. The tensions between these various chaos backed religions could fuel an entire chaos war across Europe. The whole Elemental Evil religion could be a perversion of the Old Faith and the tensions of the religions brought to the fore. The events of the Keep On The Borderland could be a foreshadowing of the coming war.
I've played in
several games that I played in several games where the undead have become a full blown zombie warrior menaces in their own rights. Here the undead have come under the domination of a copy of the Necronomicon or a similar necrotic item of horror. Perhaps the undead are actually a  faction of chaos in their own right and due to the void and vacuum of power are making a grab for power in the wastelands.
Adventurers in this sort of a situation is going to be very desperate and very involved in risky affairs in which the PC's must go up levels and risk all to fill in the voids left by the previous rulers who were  fools and cretins who were either power hungry or consumed by the forces of darkness and chaos.
More as the Tuesday night game develops in the wastelands.
Posted by Needles at 8:12 AM