So Greg Gorgonmilk approached myself & a bunch of other OSR folks about doing a Clark Ashton Smith Zothique & Xiccarph book. I contributed some input & comments but he when above & beyond putting the whole affair together. I asked for a review copy because I'm a huge Clark Ashton Smith fanatic. I'm more of a Clark Ashton Smith reader then HP Lovecraft which seems to come with time. The book itself clocks in at about three hundred & eighty four pages plus some appropriate poetry closely tied into the this particular CAS cycle. 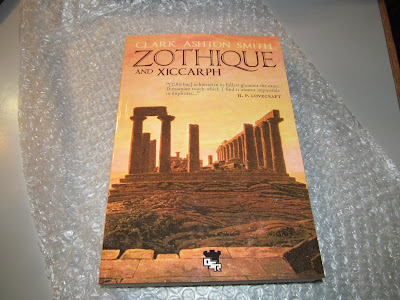 Zothique, vaguely suggested by Theosophic theories about past and future continents, is the last inhabited continent of earth. The continents of our present cycle have sunken, perhaps several times. Some have remained submerged; others have re-risen, partially, and re-arranged themselves. Zothique, as I conceive it, comprises Asia Minor, Arabia, Persia, India, parts of northern and eastern Africa, and much of the Indonesian archipelago. A new Australia exists somewhere to the south. To the west, there are only a few known islands, such as Naat, in which the black cannibals survive. To the north, are immense unexplored deserts; to the east, an immense unvoyaged sea. The peoples are mainly of Aryan or Semitic descent; but there is a negro kingdom (Ilcar) in the north-west; and scattered blacks are found throughout the other countries, mainly in palace-harems. In the southern islands survive vestiges of Indonesian or Malayan races. The science and machinery of our present civilization have long been forgotten, together with our present religions. But many gods are worshipped; and sorcery and demonism prevail again as in ancient days. Oars and sails alone are used by mariners. There are no fire-arms—only the bows, arrows, swords, javelins, etc. of antiquity. The chief language spoken (of which I have provided examples in an unpublished drama) is based on Indo-European roots and is highly inflected, like Sanskrit, Greek and Latin.

Darrell Schweitzer suggests the idea of writing about a far future land may have come from William Hope Hodgson's novel The Night Land, noting that Smith was an admirer of Hodgson's work."
You can see even on the book's side the print is strong & very easy to read, all of the classic short stories are here from these two highly influential cycles of CAS's extensive body of work. 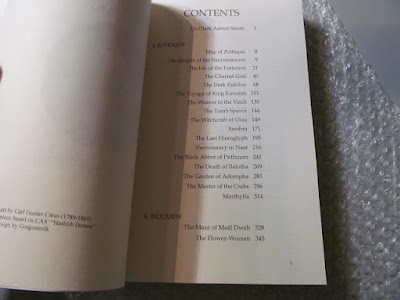 Zothique is the far future of Earth millions of eons in the Dying Sun waning last days of the world when the whole setting still has more then a tinge of magic, dread, & chaos about it. Adventure is still in the offering & women & men are willing to risk it all for there are dreaded abandoned kingdoms just waiting in wait for the unwary.
"The abandoned cities of these lost kingdoms can still be found by the unwary traveler.
One of the most ancient of these was the kingdom of Ossaru, who ruled half of Zothique. His capital lay in a desolate region near the northeastern borders of Yoros. (TS)
Cincor was the home of the fabled Nimboth dynasty, and its capital of Yethlyreom. It is now a "drear and leprous and ashen" desert (EN). The situation of Cincor relative to the other kingdoms of Zothique is uncertain, but it apparently lies east or southeast of Xylac. It was thought by some that Ossaru's capital might be located there. North of Cincor lies the land of Tinarath. The eastern bounds of Cincor are the Mykrasian Mountains, beyond which the way leads through fruitful Zhel, many-citied Istanam, and the desert of Dhir, until one comes at last to Calyz."