The Specter of Kelek the Cruel & Fan Speculation From XL1: "Quest for the Heartstone" (1984), by Michael L. Gray.

"The king is dead. And the queen is in trouble. She has chosen you to find the fabled heartstone, which is buried somewhere deep in the Mountains of Ice.
Is the gem in the hands of the corrupt Master Thief? Has he harnessed its powers for his own vile purposes? Or does it lie unguarded in the frozen ranges to the north, which teem with horrible creatures?" 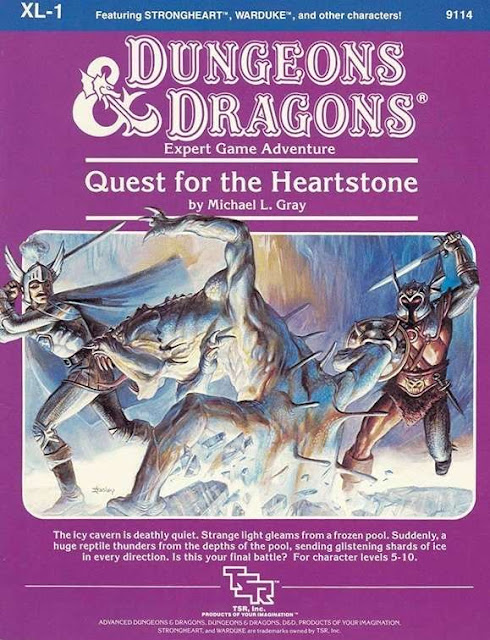 Right so life has been playing squeeze play with me again & work has been very busy but just last night I was speaking with a friend about  XL1: "Quest for the Heartstone" (1984), by Michael L. Gray.  XL remains the first and only adventure in the "XL" series for Expert D&D. It was published in 1984 during the Frank Mentzer D&D era. According to everything I've read in White Dwarf & wiki  its a terrible module; Graham Staplehurst reviewed Quest for the Heartstone for White Dwarf, and gave it 4/10 overall, calling it, "no more than a sales exercise for AD&D Action Toys".[3] Staplehurst felt that the module was "very reminiscent of everyone's first dungeon: a collection of randomly placed monsters with a random selection of Good Guys going off after some magic item and having to hack through them," criticizing that "No thought has gone into this at all, as far as I can see, although TSR have done their best with the artwork and maps to try and remedy the situation."[3] Staplehurst pointed out some of the many references within the module to the LJN AD&D toy line ("You may use the Five-headed Hydra Bendable Monster for this encounter", and "the Dragonne monsters produced by LJN Toys Ltd"), noting that "As the adventure progresses ... it merely degenerates into excuses to introduce monsters that happen to be in the TSR figures or LJN range."[3] He also pointed out some of the more bizarre encounters of the adventure, such as two giant crab spiders living in a cabin, and the "Golem Storage Room"
But that's not really the focus here & instead I want to speak about one of the most dangerous NPC bastards that your party of adventures  can encounter. I'm speaking of Kelek the Cruel & XL1 The Quest For the Heart Stone would take place long before the Season 1 Dungeons & Dragons cartoon episode "Valley of The Unicorns".  During XL1: "Quest for the Heartstone Kelek is a mere 7th level wizard of some renowned. 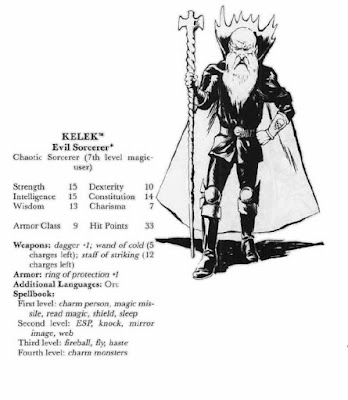 Between the events of XL1: "Quest for the Heartstone  & the "Valley Of The Unicorns" cartoon episode Kelek gained Venger as a demi god demonic patron.
Yup that's right I said demi god DCC style patron. Over & over again the evil Venger survived being 'destroyed' by the Dungeon Master's Young Ones. Kelek was completely obsessed with gaining  immortality & in Venger's service went to tenth or beyond level as a wizard. He has moved from Mystara to the Realms where he helps Warduke during Venger's campaign of terror to bring the Realms to heel. Afterward he would join Warduke on Greyhawk during the Greyhawk Wars. Possibly in the service of Luz after escaping the prison of Venger from the "Valley of The Unicorns".  In Luz's service he becomes even more dangerous making pacts with the 'unnameable' Venger's Abyssal patron. Helping broker deals on Warduke's behalf for rebuilding the Horned Society, and was instrumental in eventually helping Warduke become  a Hierarch himself. This didn't take long & he cut infernal & Abyssial deals towards the ultimate goal of lichdom. 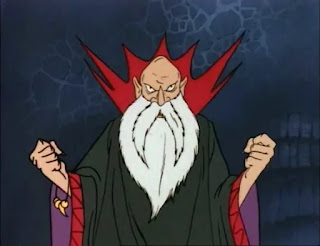 By this time Kelek had learned to stay to the background & finally after helping Warduke build his base of power & continue his existence.  Kelek gained lichdom & immortality of a sort. He's run afoul of Gort The Rogue once but that encountered led to a hasty retreat back to his own backwater planar base. He's really maintained a low profile because he still fears the wraith of Venger. There's a lot of bad blood between him & his old patron. Kelek the Cruel has quietly been building a large army of gnolls, orcs, & other humanoids on the far end of a Prime Material plane.

He often now employs parties of adventurers to recover relics, occult treasures, scrolls, etc for him. Kelek pays on time but often takes a swift revenge on any who cross his path with his own assassins. Rumors are spoken of him building his own power base with an aim of returning to his own home plane of Mystara for a bid to take over a nation or two. The ultimate goal could be revenge against Venger at some point.