The Dragon magazine by its very nature from the early days has more of a tool box feel to it. That makes it relevant to even today's OSR scene & from there we're going to dive into one of my favorite issues. The Dragon Magazine, Issue 10 from 1977 has so much good stuff in it from Tom Wham's Snit Smashing to some of the more interesting angles for getting rid of loot.  I always wanted to take this cover & turn the butterfly winged fire elemental into a Dungeon Crawl Classics adventure. 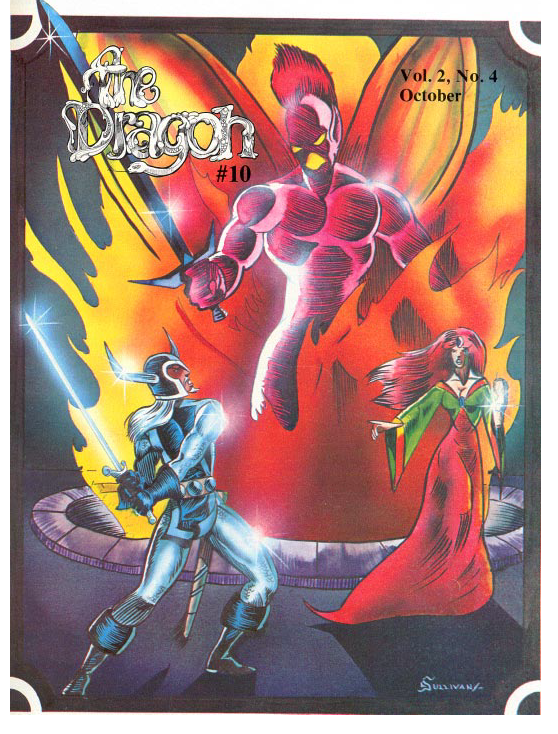 Let's get this bit right outta the way, Wayne's Books has the excellent reference site for both the early The Dragon magazine & the latter Dragon magazine issues. But issue ten is both infamous & special in a variety of ways but let's look at the contents; " GenCon X Report; Snit Smashing; The Diplomatic Stellar Conquest Player; Final Exam (Wargame Design 202); Fantasy Forge (phigure photos); Orgies, Inc. (burning up excess loot); Random Monsters (defeating the encyclopedic PC's); Weights, Measures, Physical Appearance, etc; Gaining a New Experience Level; Unique Wilderness Encounters; Rational Dungeon Design; Finieous Fingers, Wormy; more." Anyhow its actually the contents that I want to extensively talk about today & particularly "Too much loot in your campaign? D&D OPTION: ORGIES, INC. by Jon Pickens". Wait a minute before you leave the blog entirely I'm not talking about getting into details a bout orgies but what sort of black screen antics that PC's can get themselves into. You don't have to dwell on the details at all. Even though the article is meant for original Dungeons & Dragons, it has baring for many Sword & Sorcery OSR games according to the author ; "(Author’s Note: To avoid confusion later, in this article Lawful equals Good and Chaotic equals Evil and you can make your own extrapolations from there.) This article suggests one answer to a vexing problem that appeared in local play: too much treasure in the scenario. After the players amassed a few thousand GP equipment costs became irrelevant, though the players had nowhere near enough money for luxuries like private towers or galleys. But there was far too much cash for the players to simply leave in their rooms at the local inn. This couldn’t be right; Fafhrd and the Grey Mouser never had it so good! And the poor harried ref had to continually devise sneaky ways to divest his players of their ill-gotten gains. The best solution would have been a simple method for removing large quantities of treasure from the game; releasing the referee to spend more time developing and managing the scenario. The solution is simple: “Instead of receiving experience for gaining treasure, players would receive experience only as the treasure is spent.” The expenditure in GP is divided by the level of the character to determine experience. The divisor is limited to the number of hit dice allowed for the character class. The divisor is used only for experience from treasure and has nothing to do with experience for monster kills or miscellaneous experience awarded by the referee." In other words you the dungeon master isn't screwing the players outta of experience points only separating them from their gold.
But I can already hear the eyes rolling in the back of many dungeon master's heads. Wait one little second if your running a game such as Astonishing Swordmen & Sorcerers of Hyperborea & really want to to get your players in real hot water then grab your handy copy of Drunken Debauchery! by Colin Chapman.  Then "Too much loot in your campaign? D&D OPTION: ORGIES, INC. by Jon Pickens" & suddenly the player's PC's wake up with more then a hang over. They may be neck deep in debt to a loan shark or worse a wizard. 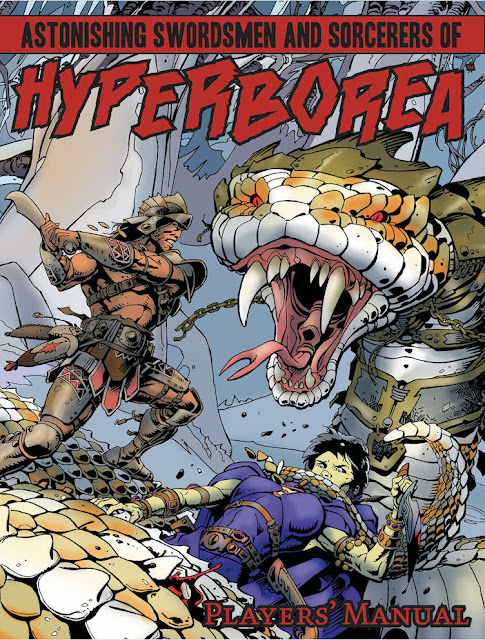 And this brings us to the errand that the wizard has planned for some party of idiots ermm adventurers. What the PC's don't realize is that the master or madame of the brothel in question is actually the front for the largest assassin's guild/spy network in the employ of the country's royals. They've got a massive problem just outside the city. There's a large container of leaking magical toxic waste left over from after the days of the Green Death. This brings us to the horror that you rolled up using RANDOM MONSTERS by Paul Montgomery Crabaugh article. Now I can hear the OSR dungeon masters going but I own James Edward Reggie IV's "Random Esoteric Creature Generator for Classic Fantasy Role-Playing Games and their Modern Simulacra". Well guess what sunshine your gonna need that book too because your party of adventurers have just become abomination & monster hunters. 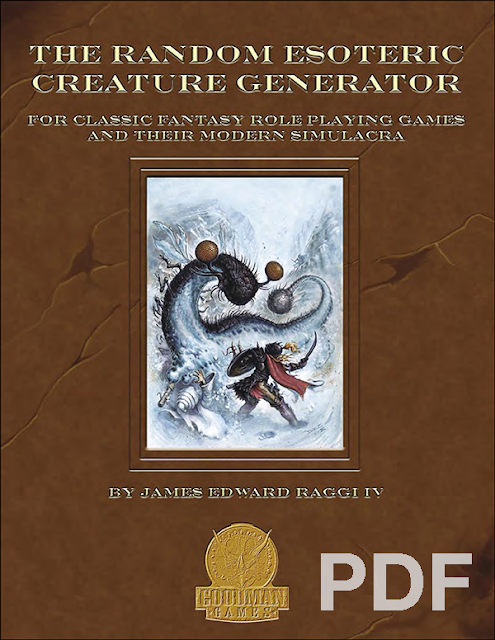 This whole train wreck of a thought process can easily be applied to say Dungeon Crawl Classics, Lamentations of the Flame Princess or even Basic or Original Dungeons & Dragons perhaps even Advanced Dungeons & Dragons with very little preparation.
Posted by Needles at 10:48 AM