"Greyhawk - City of High Culture and Low Life!
From the high towers of its grand universities to the rancid alleys of its darkest slums, the City of Greyhawk awaits you. Center of magic and learning in the Flanaess, Greyhawk is also the home of powerful thieves, mighty warriors, traitorous ambassadors, and honest craftsmen.
They all await you within the pages of this information-packed boxed set.
You get four full-size, full-color maps, each depicting a different aspect of the Greyhawk campaign. Two 96-page books give you a detailed overview of the city and a closer look at its more influential citizens - and its more notoriouus criminals."

The year is 1989 & we're in the middle of the golden epic campaign of mythology & opera. Then the bottom dropped out after a friend of mine's parents divorced & devastated our Summer. The latter part of that year saw the release of one of my all time favorite box sets The City of Greyhawk by Rick Rose, Carl Sargent, &  Douglas Niles. 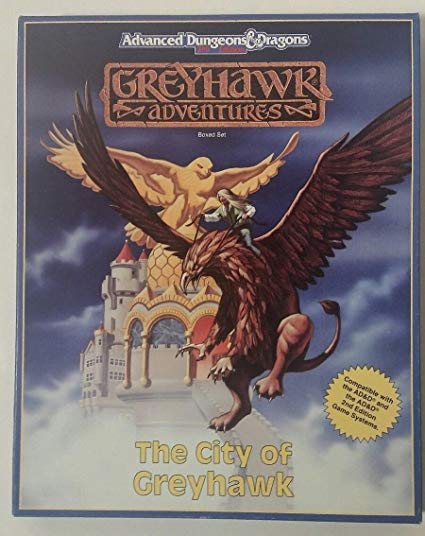 The break down from Wayne's books serves to highlight the innards of this box set & believe me we were excited as both players & dungeon masters;

Its been about a dozen years since I cracked open this box set & its interesting how things are set up & why its laid out the way it is. This box set marks a transition between 1st & 2nd edition Advanced Dungeons & Dragons as the design conceits echo throughout the box set. Here factions, & NPC folks are just fleshed out just enough to give the dungeon master lots of latitude to make this setting his or her own. Almost everything here ties in & contrasts  with the grittiness of the Greyhawk Box set. 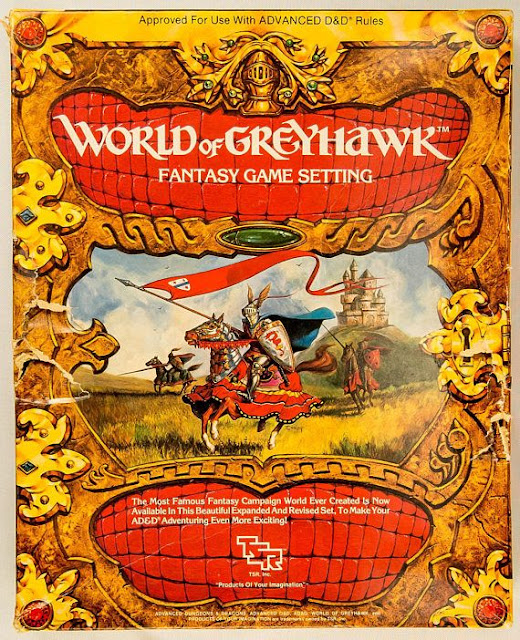 Greyhawk: Gem of the Flanaess lives up to its reputation but for us the events of Gord The Rogue novels  kept creeping in. We saw the rise of cults of the Abyss in the furthest  regions of the Flaeness. This was in keeping with the events of the Gord The Rogue series novel Sea of Death by Gary Gygax.  These events would latter on affect my own Stormbringer game as friends & players would transfer their Greyhawk PC's over into our Eternal Champion game. The City of Greyhawk by Rick Rose, Carl Sargent, &  Douglas Niles had far reaching effects as we took the PC's from our The Ring of the Nibelung campaign & brought them forward into the multiverse of the Eternal Champion in '98. 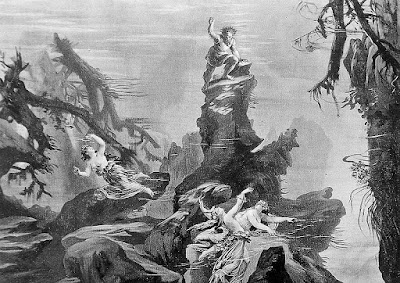 We had a mix of Viking warriors, mysterious wizards, & one or two low level demigods in the mix. Much of the material that we used came from my uncle's notes. A  heady mix of opera & AD&D elements spun through with lots of Moorcock, Clark Ashton Smith, C.L. Moore, and a healthy dose of Robert Howard thrown into the campaign mix.
Man did we pay for it as vast sums of gold were paid to resurrect the dead PC's. Fortunes gained from gods for relics that we had sweated & bleed over. But Greyhawk always played a central role in these games & still does for me.
Next time we get into where all of this is going?
Posted by Needles at 9:50 AM