Some OSR Immortal Thoughts on IM2 The Wrath of Olympus (Basic) adventure by Robert J. Blake

"Immortals lie chained atop a mountain in the Broken Lands. Their bonds relentlessly drain their power while demons cavort with glee around the wispy barrier, as strong as any prison.
Have you the courage to embark on a dangerous mission for the materials necessary to craft an artifact? If you survive that task, you must then assume the Identities of legendary heroes of Darokin and face deadly Immortal foes without revealing your Immortality! The demons of Entropy stand between you and your final goal. Have you the power to rescue the imprisoned Immortals and preserve the Prime Plane? The future of the Prime Plane is in your hands!" 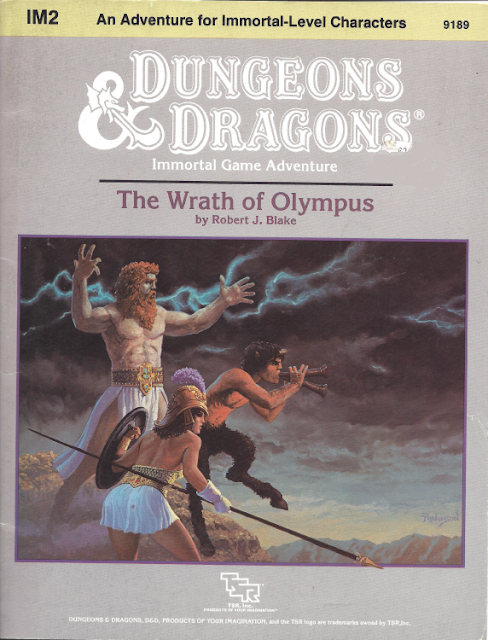 Today was one of those days where I was thinking about Mystara & its Immortals especially the IM2 The Wrath of Olympus (Basic) adventure by Robert J. Blake.  This is one of those high level modules that actually answers the age old question of Mystara why are there immortals but no gods. I really wanted to focus on one of the central statements that I came across in the module's Drivethrurpg entry; " Immortals rule author Frank Mentzer first revealed how to create an Immortals adventure in IM1: "The Immortal Storm" (1986). Now, Bob Blake was able to offer an alternative view.

Where Mentzer focused his adventure on the setting by designing a magical mystery tour of the planes, Blake instead focuses on the immortals themselves, centering his adventure on the conflict between different immortals and on the immortals' prime directive — that they not interfere on the Prime Plane.
Blake does repeat a few of Mentzer's tropes: the adventure starts off with a delegation from the hierarchs … then moves on to another multi-part MacGuffin hunt. And, he still does let players travel across several planes before landing back on the Prime Material Plane."

Now anyone that actually knows me knows that I'm a fan of Frank Mentzer's Immortal rules box set. When I was younger back in the '87 I actually got a chance to take these rules out for a very high level unholy Basic/AD&D  hybrid campaign based on Richard Wagner's opera cycle Der Ring des Nibelungen & a good number of classic Marvel Thor comic books.  It was a vicious campaign & many of our PC's were killed in the attempt. This module answered the question why are there immortals & no real gods within Mystara. The answer was because the immortals were a few steps below the 'true gods' but there were lots more of them. The module is average but the mythological & occult premises are very well thought out. There's also several hooks that I might incorporate into a large scheme for a planar magical mystery tour. IM2 The Wrath of Olympus (Basic)  is also one of the reasons that I separated Blackmoor & Mystara into two separate but interconnected realms. If the immortals are jealously guarding the realm of Mystara what happens when the mortals of Blackmoor begin to really start twisting the fate of nations? Blackmoor as it stands is a realm of mortals & has its own particular set of problems. This would later on become even more evident within the D&D Rules Cylopedia This is the module that put Mystara on the map for me as a major setting into which to set adventures. IM2 The Wrath of Olympus (Basic)  is a good addition to the archives & the idea of fighting demons atop mount Oymplus is a big plus from where I'm sitting as both a dungeon master & player. But should there be fall out from the events depicted in IM2? In all honesty I think that there should. This adventure is major incursion into the spheres of the immortals & the trespassing on their turf should leave a streak of distrust among the immortal councils of Mystara.
These days if I was to run  IM2 The Wrath of Olympus (Basic) by Robert J. Blake I'd pull out my copy of Dark Dungeons By Blacky The Black Ball. The Dark Dungeons game is a bit more streamlined & has some advantages to it. The OSR game is complete & its one that I've run in the past. Dark Dungeons is very easy to add or subtract Basic D&D systems. Since this is the case many of the immortal set's monsters can be ported over & that makes it extremely positive in my mind. Many of the adventure elements from  IM2 The Wrath of Olympus (Basic) by Robert J. Blake fits the general bill of Dark Dungeons so its a win/win situation. Anyhow I'm still talking to a few people to see if I can get another bi weekly game going.
Posted by Needles at 4:26 PM