"This extensively playtested, profusely illustrated, lightweight-yet-complete roleplaying game is an homage to the "Easy-to-Master" black box of the first role-playing game (and the first version or edition that I ever played) that does everything I wish the original did (which might also include some stuff you wish it did, too).
Like the black box, the Dungeons & Delvers: Black Book contains four races (which function as races do in later editions: they’re not racial classes), four classes, and five levels, though each class has far more talents than you can possibly choose from in a five-level spread, and there are guidelines if you want to go beyond 5th-level (there are also guidelines for making and converting monsters if you want more variety).
Fresh Take, Familiar Feel: Overall the game has a similar feel to the original roleplaying game, but there are a number of differences.
For example, kobolds and chimeras are more inline with their mythological counterparts, everyone gets to choose something at almost every level (and you can for the most part control how complex your character gets), fighters have build in scaling damage, armor both ups your Armor Class and reduces the damage you take (usually, some things mitigate it’s DR or even ignore it), clerics and wizards don’t share the same pseudo-Vancian magic system (cleric magic is safe but more limited in scope), and magical healing (and magic in general) isn’t assumed" 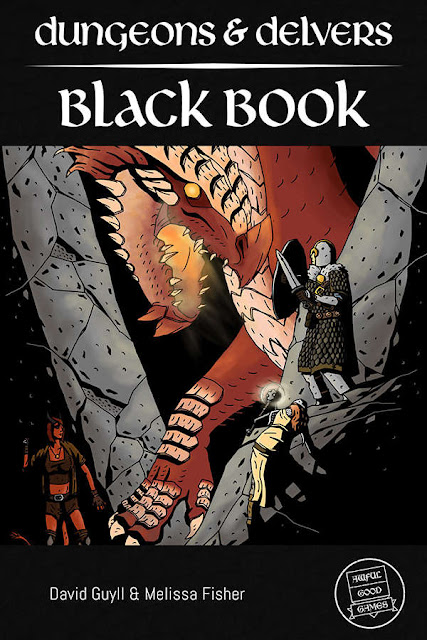 So Eric over at Bloat Games turned me on to Dungeons & Delvers - Black Book By Awful Good Games . You check out his review of the game on Youtube here. But then time got away from me & I've had work stuff come up. I've been getting slammed with the sewing machine repairs & house calls. Time got away from be but low & behold I got a copy sent to me for a review by David Guyll, & Melissa Fisher the lovely authors of Dungeons & Delvers.  This is a servicable game & takes PC's from levels one through five for their adventuring careers. Let me first start out by saying that the cartography, layout, & fonts are well laid out & easy on the eyes. This make my life a lot easier as a player, reader, & dungeon master. This is a nice rules light mix of both 3.5 Dungeons & Dragons with bits of Dungeons & Dragons fourth edition mixed through the author's unique OSR blender. This makes  Dungeons & Delvers stand out in a sea of sameness in the retroclone world. There are several races including Human, Elf, Dwarf and Kodold ( really nice nod to the actual real world mythology there). Cleric, Fighter, Rogue and Wizard are the main classes & well laid out.
There are even a few more classes in the rule book's appendix Monk, Ranger and Warlock. Plus the addition of two more races; Cambion, Sin-Flavored Tiefling, and Tarchon who are dragon born with some serious rage issues).  The  Dungeons & Delvers book is just a little something something to get a campaign off the ground. There everything needed to get the PC's past the point of no return. There's even a vivamancer wizard class for that extra punch in the dungeon as needed. This is much more sparse & gritty game with some solid 'crafting' rules that remind me of the 'Witcher' series of video games. Kill monsters strip the crap outta of them & create some items for your party.
Game play seems to run smooth from the brief bits I played around with this afternoon. The over all feel of the game feels like a combination of Medieval & gritty Sword & Sorcery adventure game with a pseudo far European feel to it. The magic system is very well handled for PC's. Characters can go from simple field adventurer to fully formed veteran customized PC. This isn't a game with power creep but there's a also an OSR twist to the characters. The artwork in Dungeons & Delvers is very well done & evokes a cartoon world  of dark sorcery & weird proportions.
This is supported by the weird twists that the seemingly familiar D&D style monsters have build right into them. 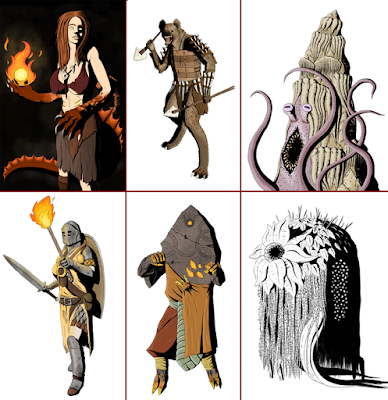 Here's an illustration from the Redbook kickstarter to give you a feel for their style & brand of weirdness that I'm speaking of.

There's something very different in the one hundred & forty one pages of Dungeons & Delvers. The care & passion that the writers/designers put into practice is evident. I think that the book is well worth not only your time but your money.  The pdf sells for around seven dollars with the hard cover version topping out at 17.00 dollars which is not bad value. All in all a five out of five for a highly underrated retroclone style Dungeons & Dragons emulator with lots of original ideas & mechanics!