In last night's game the adventurers came face to face with some of the followers of Entropy. Mutant abominations. horrors that were the result of twisted mockeries created by those Immortals who seek the end of all things. If you've been following the controversial blog posts that I've been doing on The Immortals Box set by Frank Mentzer & Aaron Allston's Wrath Of The Immortals Box Sets respectively.  Then you probably have been following some of what's been happening. The freed slaves were brought into a local hospital & a few were infected with weird rot grub like abominations. Government troops in bio hazard suits were brought in with flame throwers. This game follows what happened back on June 1st, 2019. 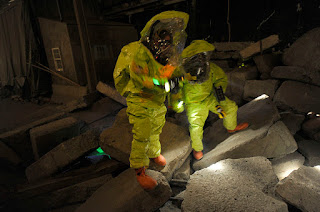 One of the PC's borrowed some of the items that an 'orderly' who was trying to break into one of the hospital wards was carrying after almost getting his head blown off Scanner's style. The orderly was quickly dispatched & the flame throwers came out. 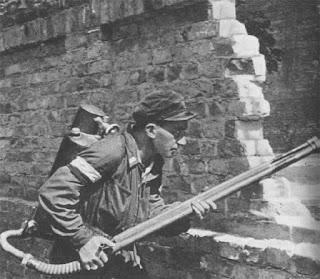 Then a fight was happening deeper in the Riccian capital as Entropy cult forces were trying to break into a local museum. One of the PC's managed to get the drop on several cult members while government clawites helped the party out. The party's psycher managed to communicate with the clawites & direct them when picked up one of their tridents.  Every few moments the monster's would use pyrokinesis to light knots of the mutant abominations on fire. These mutants use the classic gargoyle stats from the AD&D Monster Manual with the additional mutations of esp, pyrokininis, & some random psionic mutations. 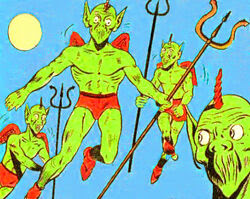 What the players don't know is the ganger/cultists have brought in one of their treasures an assault suit from the Warden from  S3 Expedition to the Barrier Peaks by Gary Gygax. Basically I'm trying to stall a bit until my other players catch up with us hopefully next week. 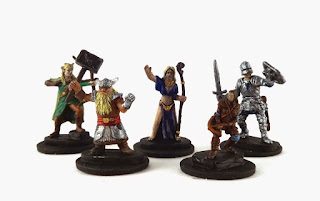 What the players don't know is that power stations set up around the city are opening planar gateways while providing unlimited energy  for power to the capital of the Riccans. Meanwhile the plot thickens as the assault armor abomination closes in. Can the other player's PC's reach the party in time? Whist all of this is occurring an aspect of the Egg of Coot looks on amused & the horror show continues. 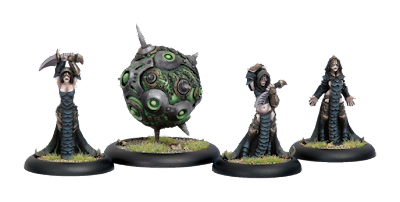