"The QUICK START CHARACTER CLASS SHEETS BY-THE-BOOK are designed to enable a group of players, new or experienced, to quickly create 1st level characters of the various races, classes, and racial classes available in Labyrinth Lord and Advanced Labyrinth Lord. Each race, class, and racial class is detailed on a single sheet with all the information needed to begin play with that class, including requirements, class abilities, a description of basic 1st level spells (as needed), and a list of starting equipment that makes the most difficult and tedious character-creation element – choosing equipment – relatively fast and simple!
Also included are appendices dealing with Rolling Up Advanced Characters, Rolling Up Basic Characters, Equipment Lists, Fast Packs, and Secondary Skills. 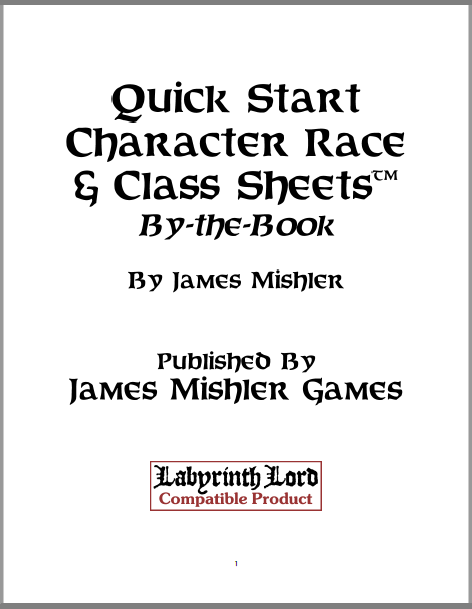 Note that the Quick Start sheets do not usually include any information about advancement, abilities, or spells available after 1st level, other than Experience Points required to attain 2nd level. For all such information, consult the Labyrinth Lord, Advanced Edition Companion, or Advanced Labyrinth Lord tomes."

The QUICK START CHARACTER RACE & CLASS SHEETS: BY-THE-BOOK By James Mishler  is essentially the quick jump kit for the  Labyrinth Lord retroclone system. In thirty two pages you have the essence of everything you need to get the jump on getting your game started with players right out of the gate. It does this in two ways one it gives the player all of the meat of the Labryth Lord system in one easy to digest system broken down into the very basics. Everything here is geared around & toward the player creating their PC's. It does this by creating everything needed to create your zero or first level PC.
This is especially useful for kicking off an Advanced Edition game campaign where the player's need to get the action moving right away. The layout is up to Mishler standards & the reading is easy on the eyes.
All of the traditional Dungeons & Dragons style fantasy races are given face time here. Dwarves, Elves, Men, etc. all have their moment in the spotlight along with many of the common Labyrinth Lord classes & their advanced versions. 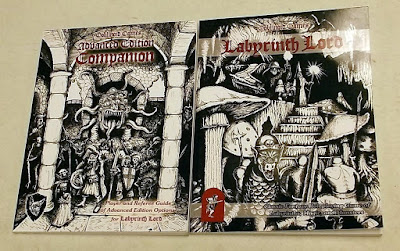 All of the parts & pieces here fit for getting together a prime cut Labryth Lord game. The impressions here are that The QUICK START CHARACTER RACE & CLASS SHEETS: BY-THE-BOOK By James Mishler  are out for blood. Mostly PC blood in order to get you the player into the role of the PC as fast as possible.
Here's the Half Elf  in all of its glory. You'll notice all of the blown out information is focused exclusivly for the player. This isn't really a dungeon crawl guide but it sure feels like its everything for  the player.
"HALF-ELF RACE Requirements: None Ability Modifiers: None Ability Min/Max: STR 3/18, DEX 6/18, CON 6/18, INT 4/18, WIS 3/18, CHA 3/18 Half-elves are the result of the union of human and elf, and as such they seldom fit into either society. They often inherit a love of nature from their elven parent and a vibrant curiosity and ambitiousness from their human parent. In some lands there are settlements of half-elves, where elves and humans have mingled for long centuries. The child of a half-elf with a half-elf, elf, or human is a half-elf. Half-elves have pointed ears like elves and are slighter of build than humans of the same height. Half-elves average 5’3” to 5’6” tall and typically weigh 110 to 140 pounds. Halfelves typically live for 250 to 350 years. Half-elf skin, hair, and eye color are highly variable, depending on the nature of their human and elven parents. Male half-elves have a base height of 5’6”, females 5’3”. To this (d10) 1-2 Subtract 1d6”, 2-5 Subtract 1d4”, 6-8 Add 1d4”, 9-10 Add 1d6”. Male half-elves have a base weight of 140 pounds, females 110 pounds. To this (d10) 1-2 Subtract 2d6 pounds, 3-5 Subtract 1d8 pounds, 6-8 Add 1d8 pounds, 9-10 Add 2d6 pounds. Half-elves start out at the following ages based on class: Assassin 20+5d4, Cleric 30+3d4, Fighter 20+4d4, Magic-User 35+3d4, Ranger 20+4d4, and Thief 20+5d4. When multiclassing, take the highest base age and add modifiers from all classes. Age provides the following modifiers to 1st level characters: • Adolescent (24 to 44) -1 to Wisdom and +1 to Constitution. • Adult (45 to 99) +1 to Strength and +1 to Constitution. • Middle-Aged (100 to 179) +1 to Intelligence and +1 to Wisdom. • Elderly (180 to 249) -2 to Strength, -1 to Dexterity, -1 to Constitution, +1 to Intelligence, and +2 to Wisdom. • Venerable (250 to 350) -3 to Strength, -2 to Dexterity, -2 to Constitution, +2 to Intelligence, and +3 to Wisdom. These numbers include all cumulative adjustments. To determine skin, hair, and eye coloration, choose from the elf and human lists, or roll d6 for each category separately, 1- 3 as per male parent, 4-6 as per female parent. Elf Eyes: Half-Elves have infravision of 60’, and have keen eyes that allow them, when actively searching, to detect hidden and secret doors with a chance of 2 in 6 (1-2 on 1d6). Ghoul Paralysis Resistance: Half-elves have inherited a resistance to the paralyzing effect of ghouls, receiving a +4 bonus to saving throws against this effect. Languages: Half-elves speak their alignment language, Common, Elvish, Gnoll, Hobgoblin, and Orcish. Half-elves may select from the following classes, with the indicated level limits: HALF-ELF CLASSES AVAILABLE Class Level Limit Assassin 11 Cleric 5 Fighter 12 Magic-User 10 Ranger 8 Thief 12 Half-elves who multi-class usually do so in the following combinations: assassin/cleric, assassin/fighter, assassin/magic-user, cleric/fighter, cleric/fighter/magic-user, cleric/magic-user, cleric/ranger, cleric/thief, fighter/magicuser, fighter/magic-user/thief, fighter/thief, magicuser/ranger, magic-user/thief, and ranger/thief. Half-elf assassins and thieves receive the following bonuses to thief abilities: HALF-ELF THIEF SKILL ADJUSTMENTS Skill Adjustment Pick Pockets +10% Hide in Shadows +5%"
So as you can see everything is boiled down into its moving parts & pieces but the overall fit makes this a nice book to have at the table top level for several reasons. One its a one shop playing field with the set up & references needed to get things moving for the players. Two all of the old D&D favorites are here & ready to go. This makes number three a race again to see whose going to take full advantage of this exclusively. But do I think that you should get , The QUICK START CHARACTER RACE & CLASS SHEETS: BY-THE-BOOK By James Mishler? In a word, very  much so because the book is on sale on Drivethrourpg for a $1,& its well worth it. The time & energy that it took to birth these things into the wild makes this an act your gonna want to get in on. 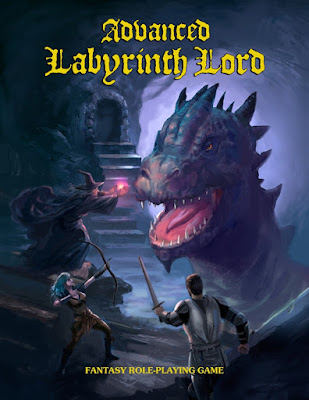 Even the Appendix are useful with things like adventurers back pack to create everything you need equipment wise; "HALFLING’S PACK Backpack (40 lb. capacity, contains 14.75 lb.) contains 1 oz. vial of ink, 5 sheets of paper, quill pen, sealing wax, a vial of common perfume, shaving kit, small steel mirror, bar of soap, flint and steel, 5 torches, 5 days of trail rations, and a small wooden box containing eight vials of spices (4 oz. each salt, pepper, cayenne pepper, cinnamon, red pepper, paprika, cumin, and oregano); a bedroll, fluffy pillow, set of cookware (pot, frying pan, spoons, knives, etc.), and a wineskin (filled with 4 pints common wine) are strapped to or hang from the outside of the pack. A signal whistle hangs from a chain on the neck, and 5 handkerchiefs are stuffed in a pocket. Value: 39 gp, 7 sp, 7 cp Weight: 35.8 lbs.". Again its about getting you to play as soon as possible.
The QUICK START CHARACTER RACE & CLASS SHEETS: BY-THE-BOOK By James Mishler takes full advantage of its reader to bring them up to speed on all facets of the Labyrinth Lord retroclone experience.