Five Ways To Screw With Bards In Old School Campaigns 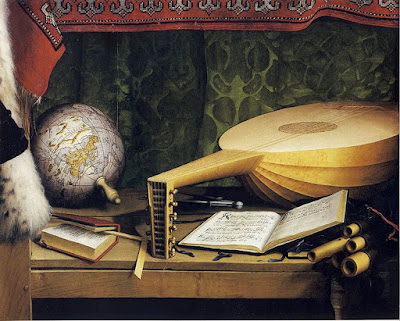 I have it in for one particular PC class in any edition, retroclone or incarnation of Dungeons & Dragons or Advanced Dungeons & Dragons. That is the Swiss Army knife of classes 'the bard'. Why? 'Because they're pretty-good at everything, and not great at anything' & that pretty much comes into play across editions. You can find a pretty good thread on Giants in the Playground forum here. Yeah, yeah, its D20 but it sums up many issues with 'the bard' class.
The fact is that certain members of the gaming community seem to play bards 'wrong' which is well summed up by Giant in the Playground member  'Razgriez'; "The reason why Bards "suck" is overall, similar to why Paladins "Suck". Various parts of the gaming community has something or another about the class they can pick apart. And even though they may not agree on what part of the Bard "sucks" they can, combined, pick apart the whole class.

Optimizers don't like that in order to optimize the class, you have to sacrifice some portion of the class's "Jack of all trade" advertisement, and that it's built in buffs can be rather underwhelming.

Munchkins hate it because it doesn't have enough "I Win" buttons

Role Players playing for the story, might have many a bad tale of a chaotic rogue who ruins the plot, for the sake of always trying to be in the spot light, or turn each session into a challenge of how many NPCs/PCs they can seduce.

Average gamers, don't like being in the back seat of buffing, and rather be on the front lines doing the "Flashy" attacks.

Veterans don't like it, because they've dealt with that one DM who's said "No, you can't use your powers, it wasn't meant to ever work that way" when, it was.

And DMs don't like it, because half the time the Bards are forgetting they have wonderful plot advancement tools!

It doesn't matter there's plenty of redeeming features or that it can be quite good at what it does. The fact is, enough people in the overall community have said "We don't like it, we think it sucks" there for, it does. Sure, people can, and have managed to turn them into completely awesome characters, but again, it's like the Paladin... It can be awesome, and well regarded in a gaming group, but it's a steep, uphill battle."  Yes this post goes all of the way back to 2013. But it highlights many of the same problems we've had with the bard for years. Yes this is from a D20 site but it hits the same high notes. I know for a fact that there's going to be at least forty five to five hundred people getting on my ass saying that, 'You haven't seen me play a XYZ bard or my character Ms. So & So the Elven diplomat from 'whenever fairyland''. I'm not writing this blog post for you folks. Instead I'm writing this for those problem players. 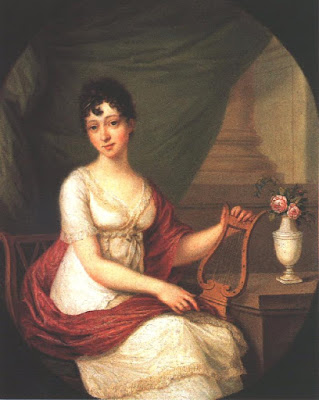 Let's start with the fact that many Dungeons & Dragons & Advanced Dungeons & Dragons monsters & peoples are completely alien. That's right I said their completely & utterly alien to the humanity or even to a certain degree the demi human races of Dungeons & Dragons.
The next time that bardic lord or lady decides to seduce whomever NPC they choose let em. Then quietly look at the life cycle of some insect & have them the one carrying the off spring of the seduced. In fact I've used this quite horrifically in a Lamentations of the Flame Princess one shot adventure. Pagan festivals centered around such fertility rituals can be quite entertaining. Also charging the PC's a fertility tax on top of such an event is another way to deal with this.
Have lute will travel.. One of the problems that I find with bards is the player's willingness to never actually find out the diplomatic landscape of a campaign. They rush head long into barging into an open wound of a situation one after another. Let them & then sic the local assassins guild on the entire party. This is often a good way to black mail PC's into completing adventures. Get the campaign back on track.
Back bard support.. There's been an ongoing 'gag' through several campaigns where a bard seduced a demonette & her lawyers mercenaries have been chasing the bastard through several planes prime for back child support. He's constantly been going to the party for loot,help, etc. and getting them involved with adventures to help feed the habit. 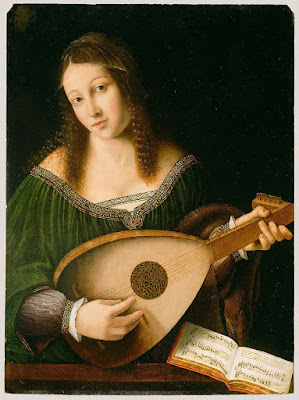 Adventurer's  choice .. Once upon a time we had a player whose 7th level bard boasted that he was the greatest chronicler of adventurers. This was overheard by an NPC monster hunter who kidnapped the bard to do exactly that. The player's PC had several minor side adventures with this NPC & it all came back together with the bard actually saving the party through the knowledge he had gained.
Drunk & deadly.. One of the most under utilized monsters of the D&D game are the 'children of Dionysus'. We had one of our bardic players boast about playing for the gods when he hit his next two levels. A priestess of Dionysus took her up on it & she was almost ripped apart for her troubles. It took the player's PC's two games to get her away from the clutches of those mad bastards. The players PC's got in way over their heads & the diplomatic skills of the party's bards actually came into play. 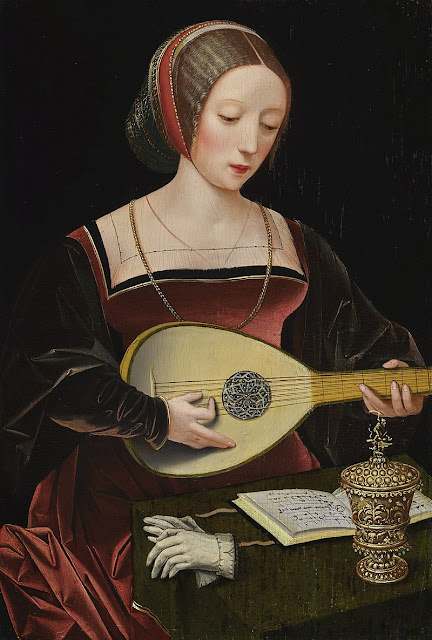 A young lady playing a lute,
by the Master of the Female Half-lengths 2

My Strings are Better Then Thine .. Demonic instruments & chaotic corded mechanisms are like lights to moths for bards. The players can't help but gravitate towards them in dungeons. They want to try them, play with them, etc. This happened when one of our bards decided to play around with a sixteen keyed piano style instrument in a dungeon & was challenged to a musical contest for his soul. He lost & his lover Edwardo took up the challenge to win back his soul as well. He lost as well & so the demonic piano thing sits lonely in a dungeon awaiting the next fool ermm adventurers. 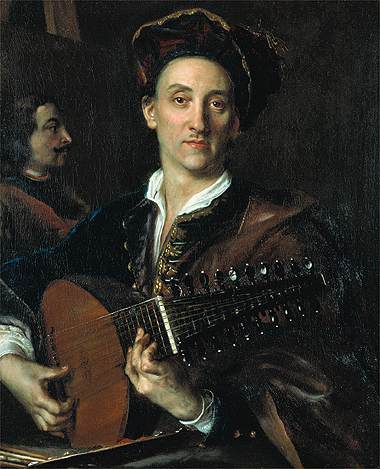 So does this mean that I loath bards? Well not really. It means that I loath the lazy garden variety way of players using D&D stereo types to get away with lousy role playing. A bit of imagination & the bard can & should be an excellent PC class.
Posted by Needles at 8:54 AM