Back to Basics & Beyond - Dungeons & Dragons Set 1: The Basic Rules the Mentzer Edition & Tom Moldvay's B4 The Lost City

"This box contains all you need to start having FUN:

Programmed adventures for easy learning and HOURS of FUN
The PLAYER'S GUIDE for beginning characters - with simple and expert combat rules, magic spells, and role playing tips"
So reads the back of one of the most iconic editions of Dungeons & Dragons Set 1: The Basic Rules  the Mentzer Edition. 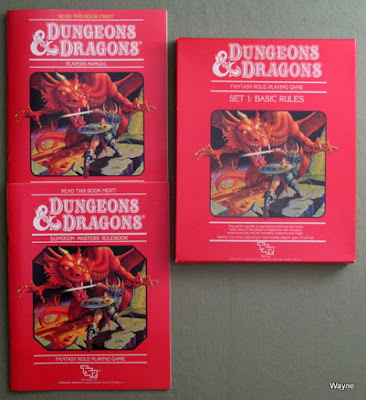 Yes I totally keep stealing these photos from Wayne's books.
He's a friend & you should totally order vintage gaming supplies from him.
What is so iconic about Mentzer edition Dungeons & Dragons? Well, besides it being responsible for reorganizing the rules of Dungeons & Dragons Basic as we know it? Well I've always gotten the feeling that Frank Mentzer is one guy who knew his editing. The layout & editing of his edition of Dungeons & Dragons is top notch. But its really the interior line art done by Larry Elmore & Jeff Easley that totally made me buy this edition. I started thinking about first level characters in the Hollow World & Mystara. How do you cope as a first level PC in these settings?! In the Hollow World almost everything is trying to eat you & everyday is like the Jurassic Park films. What kinda impact is that gonna have on PC's coping with the day to day struggle of staying alive. But only the most lucky, stupid, or intelligent are going to live long enough to become adventurers. 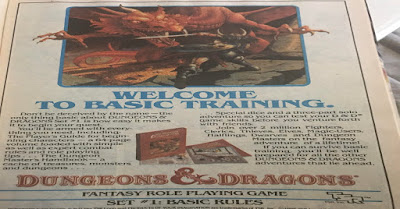 "Within the sphere of the Known World is another world, the Hollow World. There your characters will meet ancient Nithians, long disappeared from the surface world and thought extinct: Blacklore Elves, living in a magical valley and served by automatons --devices that take care of everything, from serving their food to trimming their grass: Azcans, terrifying, war-mongering natives whose taste for battle extends even into their favorite game -- the losers always die -- and many more. Monsters abound as well, from dinosaurs to aurochs." 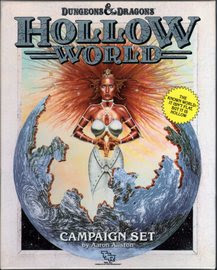 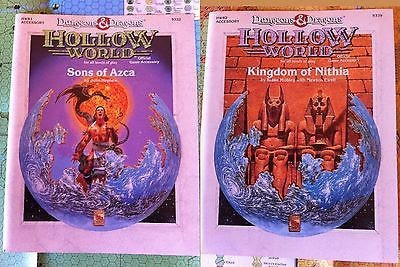 Another possibility is idea of being captured by the Kingdom of Nithia & used as slaves in that empire. Here's where the PC's might escape & stumble upon B4 Tom Moldvay's The Lost City  within the Nithia desert. Now here's where things can get tricky. The Vaults of Pandius has a free & highly valuable sourcebook for B4 The Lost City. Be sure to download it. Now here's my idea this version of 'The Lost City' isn't the same one sitting out in the deserts of Mystara! 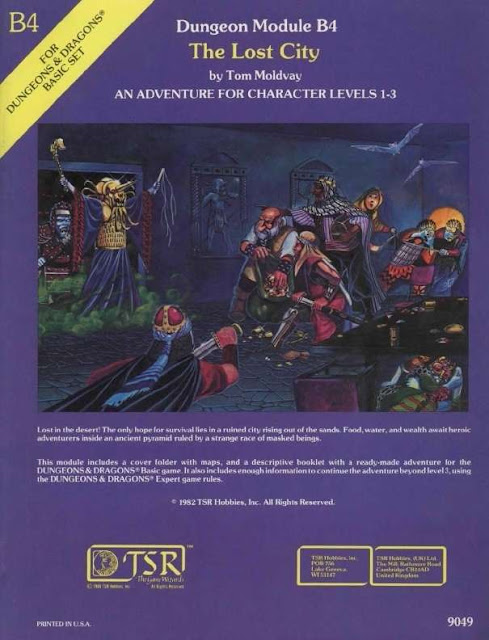 This city  instead is another of Zargon's beach heads upon Mystara & the place has may of the suggestions about the Cynidiceans in place. Gone are the insane animal headed people & instead is a lost race ruled by Great Old One. There are swaths of sections abandoned & dungeons to be explored but there's a sane race with lots of survivor factions competing with each to deal with the mega dungeon of city & its relics. Half Edgar Rice Burroughs & Robert E. Howard as the player's PC's suddenly have to deal with machinations of the serpent men the real rulers of the Cynidicean's lost city. Their looking for a mysterious relic to free themselves from becoming prey to the serpent men. They've been prey animals for centuries & things are getting more desperate as time goes on.
Is the 'lost city' connected to the one in the deserts of Mystara? You better believe it through a teleportation or planar gateway. They might make a forray into the world above in Mystara. Resupply & head back to do battle with the primeval horrors of the lost city. They might even use some set of rooms as a base to conduct raids & dungeon crawls from.
Posted by Needles at 6:53 PM