'A desperate sorceress, a land wracked by war, & a very dangerous war open gateways better left closed. The mysterious Castle Amber, you find yourselves cut off form the world you know. The castle is fraught with peril. Members of the strange Amber family, some insane, some merely deadly, lurk around every corner. Somewhere in the castle is the key to your escape."

The year is 1940 & Paris is occupied by Nazis forces across the country small elite teams of SS are combing a small backwater village & its accompanying cathedral. They are seeking the ruins of the Castle Amber (Chateau d' Amberville) for the skull of the sorceress Istarelle, the sorceress of Averoigne. Said to be in the possession of the the wizard-noble Stephen Amber (Etienne d'Amberville).  What the SS soldiers don't know is that they have crossed a boundary of the lych way. Setting in motion the shattering of time around the castle ruins & beyond.

The fools have released the  Breton Ankou, who was trapped in a tomb in Fairyland at the end of the lych way . Already two of the S.S. soldiers are dead & neither the living nor the dead are safe from this creature of Chaos. Meanwhile, tower of the sorceress Istarelle exists across time  & space leering its shadow into Avalon,  Averoigne during 1940 & 1337 at the start of the Hundred Years War, & even beyond. The PC's have been smuggled in during the occupation of 1940 as consultants & occult trouble shooters to the French resistance. Should they encounter  a living shadow of Istarelle they must save vs charm or perhaps fall in love with the sorceress. The tower boasts a living shadow of Istarelle  reputed to be the daughter of Satan himself. She is aware of the  Breton Ankou ( the equivalent  of a Pit Fiend AD&D Monster Manual first edition). But she must have the ring of Ebon to cast the ritual  of banishment. The ring rests within the Chateau d' Amberville. But the PC's may become trapped there. 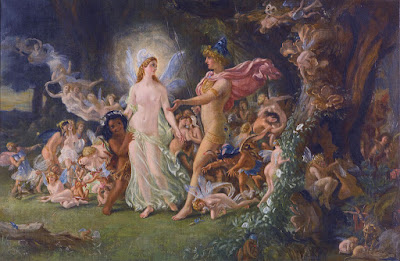 Another shadow caught in the mists of the Chateau d' Amberville are the events of the Hundred Years War set in motion in another echo outside of time & space.


"The Hundred Years' War was a series of conflicts waged from 1337 to 1453 by the House of Plantagenet, rulers of the Kingdom of England, against the French House of Valois, over the right to rule the Kingdom of France"
This is one of the places where Dark Albion  & Dark Albion Cults of Chaos is key.
The freeing of the  Breton Ankou allows other chaos based horrors to grow bold enough to escape the confines of Fairyland. A band of chaos infected 3rd level human warriors trapped since Roman times is not out of the question. These infected might be the former chaos cult of  the  Breton Ankou. Trapped for all eternity to do the bidding of this demonic monster of death & destruction. 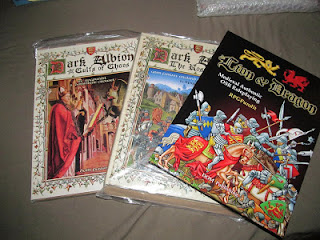 The PC's might encounter Will O'Wisps or worse that accompany the wagon or the warriors of the Breton Ankou. Corpse Candle lights will be the first indication of this monster's presence;
"A corpse candle or light is a flame or ball of light, often blue, that is seen to travel just above the ground on the route from the cemetery to the dying person's house and back again, and is particularly associated with Wales.[7] A corpse fire is very similar as the name comes from lights appearing specifically within graveyards where it was believed the lights were an omen of death or coming tragedy and would mark the route of a future funeral, from the victim's house to the graveyard, where it would vanish into the ground at the site of the burial. The appearance was often said to be on the night before a death."

Should the PC's fail in their attempt to recover the ring of Ebon to set things right. The tower of the sorceress may drift back to Fairyland or even Earth's Dreamlands. The fact is that neither the Castle Amber (Chateau d' Amberville) nor  Averoigne are wholly of Earth.

This begs the question what will happen when the Inquisition of Albion finds out about the forces of chaos being let loose on Earth? More then likely a squad of troops will be dispatched or a smaller force of Inquisition investigators.  This might start with the appearance of witch balls or baubles appearing in various places around Averoigne;

"This was part of a broader fear of spirits that might flit into dwellings. Witch bottles were common throughout Europe – bottles or glass spheres containing a mass of threads, often with charms entangled in them. Its purpose was to draw in and trap evil and negative energy directed at its owner. Folk magic contends that the witch bottle protects against evil spirits and magical attack, and counteracts spells cast by witches, also forestalling the passage into habitations of witches flying about at night.[25] A witch ball was much the same; however, a more light-hearted belief was that the witch saw her distorted face in the curved glass and was frightened away. The term witch ball is probably a corruption of watch ball because it was used as a guard against evil spirits.
If straight lines did not hinder the passage of spirits, then convoluted or tangled "lines" could ensnare them and ancient stone and turf labyrinths, found in many parts of Europe and Scandinavia, could serve the purpose of capturing evil " 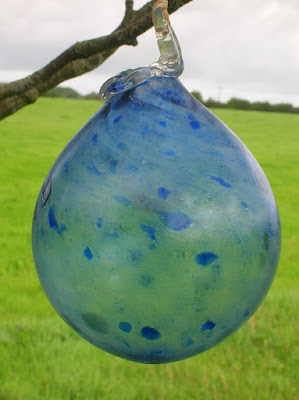 And what of the wizard-noble Stephen Amber (Etienne d'Amberville)? Will he stand idly by whist the occult barriers of time & space are smashed in his very backyard while a monster of Chaos roams his lands?! I doubt it! The fact is that the Ambers are a blood line of incredibly dangerous occultists in the tradition Clark Ashton Smith.  Albion's authorities know how dangerous the Dreamlands & the Celtic Otherworld is. They've seen Fairyland wash normal reality away at the very edges of their empire. Note that that this from my personal Dark Albion campaign.

Note that this is just the start of this campaign idea which came from a discussion I had with my friend Steve over the Christmas & New Year holiday. More coming up soon!

I literally just came across this resource post on Facebook from the Atlas of Mystara site.
Fantastic map & resource for Mystara.
Posted by Needles at 11:36 PM