Deep in my heart, as in the hollow stone
And silence of some olden sepulcher,
Thy silver beauty lies, and shall not stir—
Forgotten, incorruptible, alone:

Though altars darken, and a wind be blown
From starless seas on beacon-fires that were—
Within thy tomb, with oils of balm and myrrh,
For ever burn the onyx lamps unknown.

And though the bleak Novembral gardens yield
Rose-dust and ivy-leaf, nor any flower
Be found through vermeil forest or wan field—
Still, still the asphodel and lotos lie
Around thy bed, and hour by silent hour,
Exhale immortal fragrance like a sigh.


Steve our dungeon master had been playing with our party one by one Ten Little Indians style but this game was different. It was the end & there wasn't anything anyone could do. The end of the year game had come on the shores of Zothique! We were to face the wraith of  the dead necromancer king's whose tomb we had looted. He didn't want the treasures back he wanted revenge! 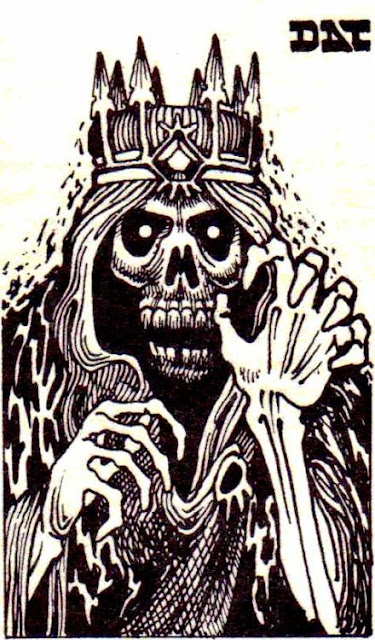 
We were face to face with the necromancer lich king himself. A few of us had survived but as noon approached a force of raiders  the likes of which we'd not seen before was upon us. The necomancer king's army was upon us! 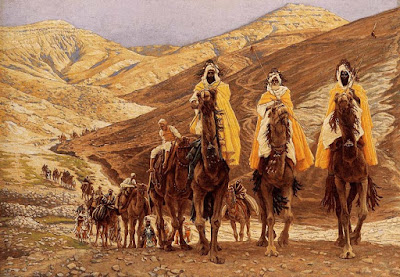 We tossed fire balls & shot his way  but the endless stream of warriors was way too much for us. There was no coming back from this but then the words of power streamed from his decayed & swollen lips. Call down the wraith of Thasaidon the ruler of the Seven Hells onto our heads! It was glorious! The shifting sands opened upon our heads! The end came swiftly in the form of an Earth Element/storm conjured up by the wraith of Thasaidon. This thing tore through our party like tissue paper! 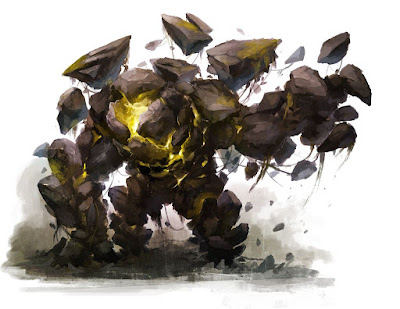 Well that's it folks. My PC is officially dead & past the point of resurrection. The end of my PC came swiftly in the light of the red day on Zothique.
There isn't a track of us or our modern equipment on Zothique. The whole affair took about three hours because we had thwarted Steve's plans with the ghouls that he was planning on sending our way earlier that night. But this was dungeon master wasn't going to be denied. So we were ready & our PC's were going to go out in style! Well no they weren't?! Everything that we'd done in the campaign had been wiped out in one swift sweep of the Liche's wraith!
But that wasn't the end!

"In all things, the people of Cincor performed the actions of life at the will of Mmatmuor and Sodosma. They spoke, they moved, they ate and drank as in life. They heard and saw and felt with a similitude of the senses that had been theirs before death; but their brains were enthralled by a dreadful necromancy. They recalled but dimly their former existence; and the state to which they had been summoned was empty and troublous and shadow-like. Their blood ran chill and sluggish, mingled with water of Lethe; and the vapors of Lethe clouded their eyes.

Dumbly they obeyed the dictates of their tyrannous lords, without rebellion or protest, but filled with a vague, illimitable weariness such as the dead must know, when having drunk of eternal sleep, they are called back once more to the bitterness of mortal being. They knew no passion or desire. or delight, only the black languor of their awakening from Lethe, and a gray, ceaseless longing to return to that interrupted slumber."

The Empire of the Necromancers


We rose with the commands of power of the necromancer king & followed him back into the tomb to serve him for all eternity! Now we have to wait till June or July to see if we can put our PC's from their miserable undead existences! Can our heroes be freed from the yoke of undeath & depravity. Steve's direct inspiration was Clark Ashton Smith's The Empire of the Necromancers. The wraith of necromancers & liches is swift & very dangerous!
Posted by Needles at 12:13 PM