"...out of the mists rose a bloated, hovering eye with tentacle ganglia clutching dozens of knives with jagged blades. Floating like an airborne jellyfish, it gazed dead ahead with its single lidless orb and as it approached I saw myself reflected in the slick surface..."
TURN UP THE HEAT...
When it comes to bringing the fire there was nothing like the little add ons that you could buy back in the 90's for Mayfair's Demon line. These add ons such as Denizen's of Verekna were no frills but had the same stamp of quality that the rest of the Mayfair Role Aids line had. Denizen's of Verekna had about fifty pages of demonic goodness & weird old school horror to add in to give your AD&D paladins a stomach ache or two. 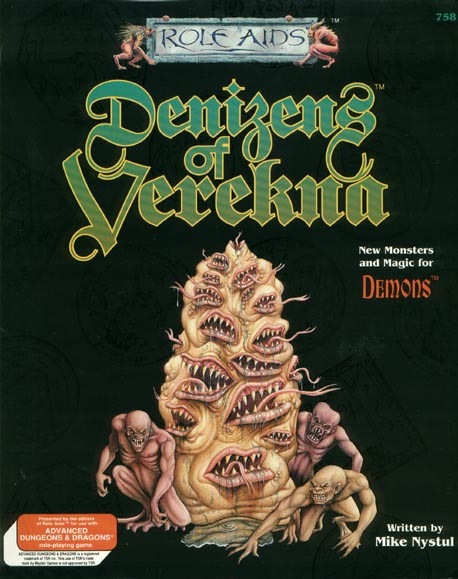 Mike Nystul brings the focus onto the the Marshals, Governors and Generals of the Prince of Deception  of the Infernus. Back in the 90's this was some very dangerous demonic stuff to encounter in the dungeons & back alley streets of your urban fantasy setting.
"DENIZENS OF VEREKNA contains a monster folio with more than 50 loose-leaf pages of new monsters from the demi-plane of Verekna including complete entries for the Marshals, Governors and Generals of the Prince of Deception and a summary of the various Thanes and Lieutenants who serve them.
In addition to a veritable rogues gallery of demon lords, DENIZENS OF VEREKNA features the Grey Grimoire, a compilation of special spells employed by the most powerful wizards of the Infernus. These magicks can be used in conjunction with all of the products in the DEMONS line, making infernal sorcery a force to reckon with and the creatures who use it more dangerous than ever before.
DENIZENS OF VEREKNA expands on the material presented in the DEMONS sourcepack but can also be used as a stand alone supplement for any campaign."

Back in the 90's Nystul was a busy guy during the 2nd golden age of rpgs before going on to churn out the iconic Whispering Vault rpg. Already we can see hints of the weirdness that this author brought to the table. For first edition AD&D these demonic bastards were a force to be reckoned with.By the time third edition & three point five Dungeons & Dragons arrived they were weak by comparison to other demonic horrors churning out in D20 land. But I've always had a soft spot for Denizen's of Verekna.  This pack came with some excellent hand outs for the player's PC's to find.
The infernal sorcery of Denizen's of Verekna is one of its perks. Collect all of the Demons source packs & you complete the spell book handout. There was some very entertaining & interesting ideas in the Demons line. 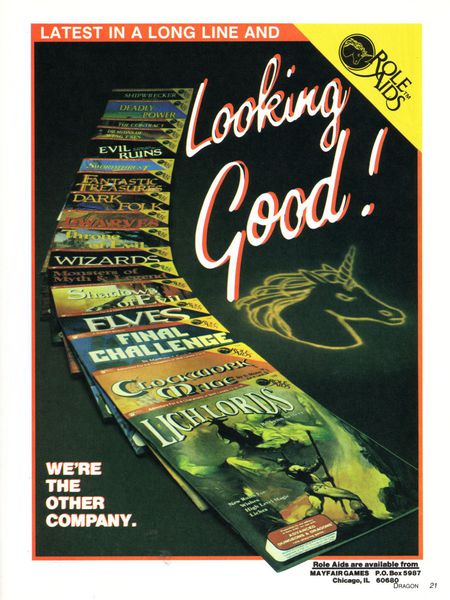 If you can find Denizen's of Verekna at a decent price then its well worth picking up. The spells are solid, the demonic add on monsters are easily inserted into the mix, & the additional demonic fire power of the Infernus makes this pack a good buy. But find this pack cheaply as it comes up from time to time on the used rpg & Dungeons & Dragons market. I give this one a four out of five.