"It is terribly cold. You swam for your life to this mysterious island, losing most of your provisions in the process, only to find it barren of all but grass. A biting wind from the north drives through your wet clothes, chilling you to the bone. Night is falling and promises even colder temperatures; you wish this place had even a bush to burn as firewood. Your stomach has just begun to complain about the lack of dinner, when one of your companions calls, and you rush o his side, hoping he's found a way to turn grass into a sandwich. Instead, he points to the ground in front of him. "Look there." Set in a shallow depression in the ground is a stone door. Your friend reaches down and gives a tug, and the door swings slowly open on creaking hinges, revealing a descending stair. The first thought that crosses your mind in whether it would be better to freeze to death up here in the wind or fall into the hands of Castanamir the Mad, the unpredictable. "


C3 The Lost Island of Castanamir is one of the competition modules by Ken Rolston. The module is a solid one that was at the time of its release very well put together. Originally this was one of the C series of competition modules & way ahead of its time.  "The Lost Island of Castanamir was written by Ken Rolston, with art by Jeff Easley, and was published by TSR in 1984 as a 32-page booklet with an outer folder"

What makes it one of the better competition modules? Well a factor is the exclusion of the point system according to its Drivethrurpg entry; "C3 marks a change from the earlier competition adventures. It doesn't have visual handouts, and its scoring is much more subjective - no longer including specific points for specific actions as C1 and C2 did.".  The other thing is the fact that this module plugs into the old school/ OSR gonzo nature of dungeon crawling; ""Lost Island" is a classic tournament dungeon crawl, full of wacky teleporters and other strangeness. It also includes science fantasy elements like robots (iron men) and refrigerators."  But don't think that this is simply a 'fun house' module there's a lot going on here that the DM can plug into his or her own campaign. 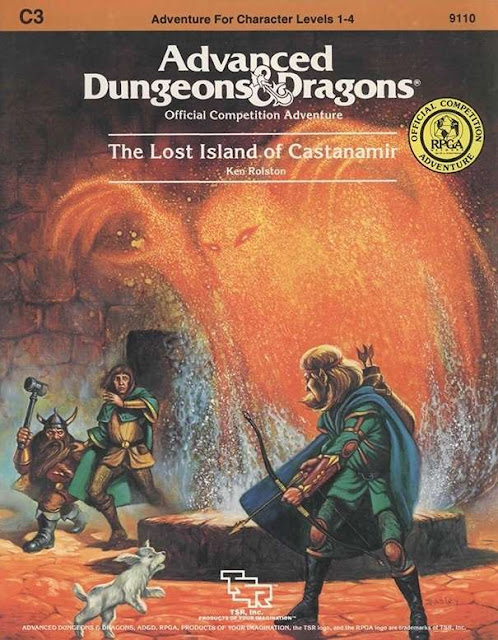 With the  demi god/ super hero game campaign I've been asked to include this module's location  because its extra planar nature;

"In this scenario, the adventurers pass through magical portals into a series of interlinked chambers.[2]
The characters are encouraged by a young scholarly mage to voyage into the Sea of Pastures, to explore a mysterious island connected with a number of recent shipwrecks and disappearances. The island is grassy and windblasted, but eventually the characters discover a stone door leading into a subterranean complex. There, they discover 18 rooms linked by secret passages and magical portals. Most of these rooms have been ransacked by a variety of other survivors, human and monstrous. These survivors are likewise trapped within the labyrinth and are either eking out a miserable existence there or else desperately searching for a means of escape.
Also within the building are a number of extraplanar creatures, collectively known as gingwatzim, who can shift between various forms: an energy form (glowing ball of light), an inanimate form (usually a magical weapon), and an animate form (an animal or monster). Eventually the characters may find the exit, and are once again deposited on the dreary islands to await rescue."

Wizards are always a risky factor for a campaign. One of the adventure campaign factors of both fantasy fiction & Dungeons & Dragons is the insanity of wizards. This is especially true of the high level ones! C3 The Lost Island of Castanamir by Ken Rolston bares this out. The fact is that the past of the island bares this out. In fact many elements here bare a striking resemblance to the "The Maze of Maal Dweb" by  Clark Ashton Smith. CAS's  Xiccarph cycle had a definite effect on Robert Kuntz's campaign & adventure work as well. 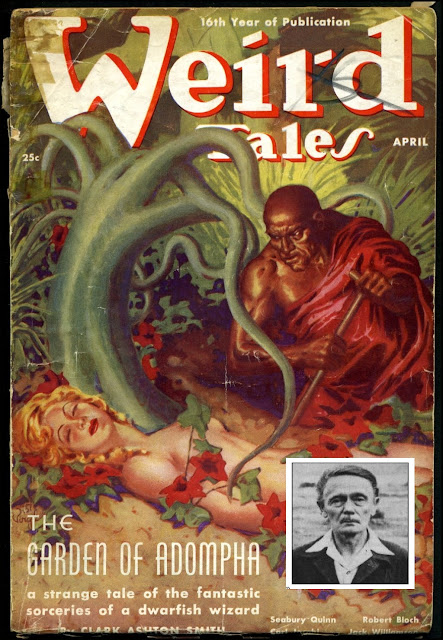 So what does this have to do with C3 The Lost Island of Castanamir By Ken Rolston & high level campaigns? After all this is only a first level module for characters levels one through four? The key here is the review by Chris Hunter;
"Chris Hunter reviewed the module in Imagine magazine, giving it a mixed review.[1] He wrote that, as a competition module, it is "so tough that not everyone survives" and thus when used with regular characters Hunter suggested the use of higher level characters.[1] He described the module as disjointed and difficult to DM, as many encounters were not fully thought through by the designers. As this module introduces an "interesting class of creatures", it could also have major long-term consequences for a campaign.[1] According to Hunter, C3 is "good buy" for those looking for a competition module.[1] However, he did not recommend it for an ongoing campaign"

So C3 could have long term consequences on a campaign hmm? I'm a sucker for competition modules & if we look a wee bit deeper into  the all powerful sorcerer Maal Dweb's works then we see that he's gone up against a wide variety of heroes, pulp heroes, etc.  This is especially true in CAS's Maze of the Enchanter;
" At length he came to a lampless, column-crowded portico; and, gliding silently as a jungle snake, he entered the mysterious house of Maal Dweb. A door stood open behind the dark pillars; and beyond the door he discerned the dim reaches of an empty hall.
Tiglari went in with redoubled caution, and began to follow the arrased wall. The place was full of unknown perfumes, languorous and somnolent: a subtle reek as of censers in hidden alcoves of love. He did not like the perfumes; and the silence troubled him more and more. It seemed to him that the darkness was thick with unheard breathings, was alive with invisible movements.
Slowly, like the opening of great yellow eyes, yellow, flames arose in lamps of copper along the hall. Tiglari hid himself behind an arras; and peering forth presently, he saw that the hall was still deserted. Finally he dared to resume his progress. All around him the rich hangings, broidered with purple men and blue women on a field of blood, appeared to stir with uneasy life in a wind he could not feel. But there was no sign of the presence of Maal Dweb or his metal servitors and human odalisques.
The doors on either side of the hall, with cunningly mated valves of ebony and ivory, were all closed. At the far end Tiglari saw a thin rift of light in a somber double arras. Parting the arras very slowly, he peered through into a huge brilliantly lit chamber that seemed to be the harem of Maal Dweb, peopled with all the girls that the enchanter had summoned to his dwelling. It seemed, in fact, that there were hundreds, leaning or lying on ornate couches, or standing in attitudes of languor or terror. Tiglari discerned in the throng the women of Ommu-Zain, whose flesh is whiter than desert salt; the slim girls of Uthmai, who are molded from breathing, palpitating jet; the queenly topaz girls of equatorial Xala; and the small women of Ilap, who have the tones of newly greening bronze. But among them all he could not find the lotus-like beauty of Athlé.
Much he marveled at the number of the women and the perfect stillness with which they maintained their various postures. They were like goddesses that slept in some enchanted hall of eternity. Tiglari, the intrepid hunter, was awed and frightened. These women — if indeed they were women and not mere statues — were surely the thralls of a death-like spell. Here, indeed, was proof of the sorcery of Maal Dweb."


So here we have an isolated location belonging to a former wizard or other worldly power just waiting outside of the campaign setting's location waiting to trap & perhaps destroy any character who comes into contact with its form & function.

The lost island waiting for a group of intrepid adventurers is a long held tradition in the various Celtic mythologies & super hero comics from the Golden age to the modern era. 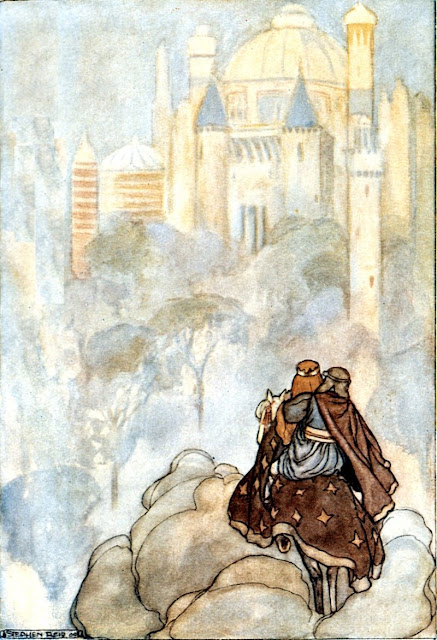 C3 The Lost Island of Castanamir By Ken Rolston has a definitive place at my table coming up! We've got more adventure campaign commentary & classic adventure entries coming up.
Posted by Needles at 12:08 PM