A crownless king who reigns alone,
I live within this ashen land,
Where winds rebuild from wandering sand
My columns and my crumbled throne.

My sway is on the men that were,
And wan sweet women, dear and dead;
Beside a marble queen, my bed
Is made within this sepulcher.

In gardens desolate to the sun,
Faring alone, I sigh to find
The dusty closes, dim and blind,
Where winter and the spring are one.

My shadowy visage, grey with grief,
In sunken waters walled with sand,
I see- where all mine ancient land
Lies yellow like an autumn leaf.

My silver lutes of subtle string,
Are rust- but on the grievous breeze
I hear what sobbing memories,
And muted sorrows murmuring!

Across the broken monuments,
Memorial of the dreams of old,
The sunset flings a ghostly gold
To mock mine ancient affluence.

About the tombs of stone and brass,
The silver lights of evening flee;
And slowly now, and solemnly,
I see the pomp of shadows pass.

Often, beneath some fervid moon,
With splendid spells I vainly strive
Dead loves imperial to revive,
And speak a heart-remembered rune-

But, ah, the lovely phantoms fail,
The faces fade to mist and light,
The vermeil lips of my delight
Are dim, the eyes are ashen-pale.

A crownless king who reigns alone,
I live within this ashen land,
Where winds rebuild from wandering sand
My columns and my crumbled throne.
The Kingdom of Shadows  (1922) by Clark Ashton Smith

" Lost in the desert! The only hope for survival lies in a ruined city rising out of the sands. Food, water, and wealth await heroic adventures inside and ancient pyramid ruled by a strange race of masked beings. "
This time we're going to be using & modifying the classic into something quite wicked. The PC's have inherited a mansion from a rich NPC patron who filled it with all kinds of treasures  & relics of the ancients. But all is not as it seems! 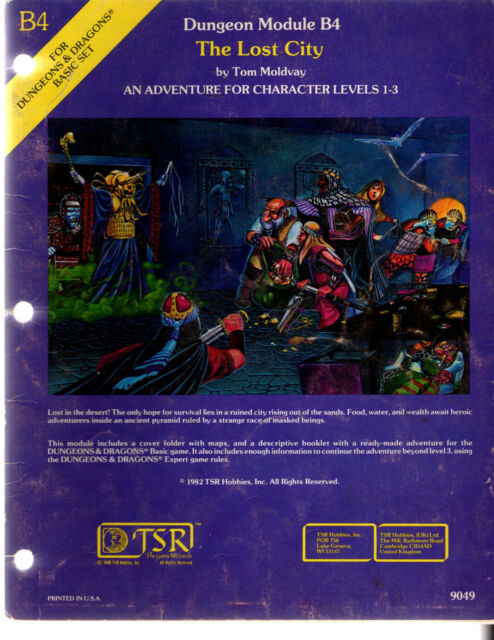 So once again I'm going back to my campaign notes & an idea that I had for Clark Ashton Smith's Zothique with a very definitive pulp & cultclassic movie twist from the early 00's. Anyone that knows me knows that I'm a huge fan of the Dark Castle movies. Dark Castle is the movie production house that was formed back about '99.
"Dark Castle Entertainment. Dark Castle Entertainment is an American film production label and a division of Silver Pictures, a production house formerly affiliated with Warner Bros. It was formed in 1999 by Joel Silver, Robert Zemeckis, and Gilbert Adler."
One of which was the Thir13en Ghosts (2001) which was a remake/homage to the classic William Castle film 'Thirteen Ghosts' with Vincent Prince. The issue is that Thirteen Ghosts is very well known today & instead I've opted to use the 2001 remake/homage film as a sort of jump off point. The idea is that there is a lovely house filled with all kinds of treasure out in a ruined desert oasis. The place has been abandoned following the death of the necromancer/wizard patron who once upon a time was distantly related to one of the PC's.

What the PC's don't know is that that their dearly departed relative has trapped thirteen spirits of the damned in order to open 'The Eye of The Underworld' according to the Astrology of the Damned. Yes I just completely modified the entire occult & supernatural background of the original film. And we'll see why. The Eye of the Underworld actually opens a planar rift into the underworld of Hades. The place is bursting at the seams with the dead of an Earth that has experienced several epochs of Apocalypse. While the mechanism  eye does allow the fool who uses it to see & control both the future & the past. 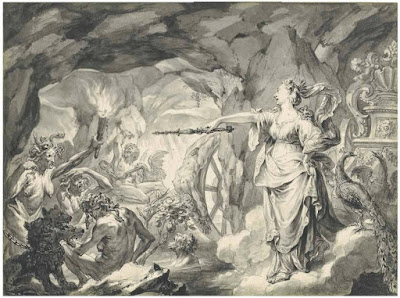 What it actually does is allow the pagan dead forces to run amok across the fact of Zothique. The monsters of legend cling to Entrance just waiting to burst forth once again to run riot; "In front of the entrance to the underworld live Grief, Anxiety, Diseases, and Old Age. Fear, Hunger, Death, Agony, and Sleep also live in front of the entrance, together with Guilty Joys. On the opposite threshold is War, the Erinyes, and Eris. Close to the doors are many beasts, including Centaurs, Gorgons, the Lernaean Hydra, the Chimera, and Harpies. In the midst of all this, an Elm can be seen where false dreams cling under every leaf."

Hades is a greedy god & his reign during the hundreds of centuries has not sat well. He still wants the living & has been stroking the fires of the living with tales of bargains & treasures.  "The "queen of perdition and goddess of all iniquities," Alila is worshipped in central Zothique' has supplanted Hades. He's not been happy about it for many eons & has been using the forbidden magicks of necromancy to his advantage.  “Mordiggian is the god of Zul-Bha-Sair is not happy with Hades because his necromancers have been raising an army of the Undead. 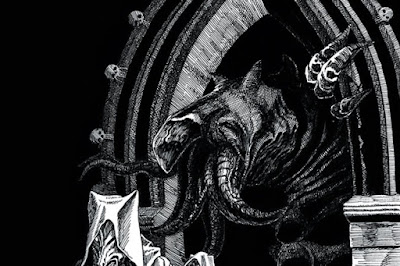 Down below the desert ruins there is a war going on between the ghosts & crazed cultists of these gods. The PC's if they are not careful will be caught in the middle of the war happening within the dungeons & locations found within the hallow halls of B4 The Lost City By Tom Moldvay  . Part of the inspiration of course is Clark Ashton Smith's The Empire of the Necromancers;

"Weary with their strange journey and their oft-repeated incantations, Mmatmuor and Sodosma saw before them at last, from a desert hill, the lofty spires and fair, unbroken domes of Yethlyreom, steeped in the darkening stagnant blood of ominous sunset.
'It is a goodly land,' said Mmatmuor, 'and you and I will share it between us, and hold dominion over all its dead, and be crowned as emperors on the morrow in Yethlyreom.'
'Aye,' replied Sodosma, 'for there is none living to dis pute us here; and those that we have summoned from the tomb shall move and breathe only at our dictation, and may not rebel against us.'
So, in the blood-red twilight that thickened with purple, they entered Yethlyreom and rode on among the lofty, lampless mansions, and installed themselves with their grisly retinue in that stately and abandoned palace, where the dynasty of Nimboth emperors had reigned for two thousand years with dominion over Cincor.
In the dusty golden halls, they lit the empty lamps of onyx by means of their cunning sorcery, and supped on royal viands, provided from past years, which they evoked in like manner. Ancient and imperial wines were poured for them in moonstone cups by the fleshless hands of their servitors; and they drank and feasted and revelled in fantasmagoric pomp, deferring till the morrow the resurrectiom of those who lay dead in Yethlyreom.
They rose betimes, in the dark crimson dawn, from the opulent palace-beds in which they had slept; for much remained to be done. Everywhere in that forgotten city, they went busily to and fro, working their spells on the people that had died in the last year of the pest and had lain unburied. And having accomplished this, they passed beyond Yethlyreom into that other city of high tombs and mighty mausoleums, in which lay the Nimboth emperors and the more consequential citizens and nobles of Cincor.
Here they bade their skeleton slaves to break in the sealed doors with hammers; and then, with their sinful, tyrannous incantations, they called forth the imperial mummies, even to the eldest of the dynasty, all of whom came walking stiffly, with lightless eyes, in rich swathings sewn with flame-bright jewels. And also, later, they brought forth to a semblance of life many generations of courtiers and dignitaries."

If the PC's are not sacrificed to the Eye of the Underworld mechanism & survive the machinations of the necromancer. Then the PCs will have to survive the wraith of a Greco Roman god who may or may not be Hades. 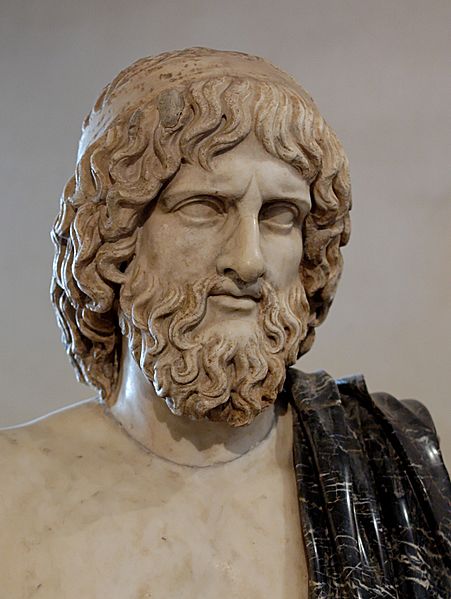 Bust of Hades. Marble, Roman copy after a Greek original from the 5th century BCE; the black mantle is a modern addition

There comes a point far in the future when the cosmic cycles of worship & praise are over with. These leave behind the remains of a great many mythological entities but entropy will not be denied.  This is something that we see time & again in the writings & poetry of Clark Ashton Smith. This might just be the case here & its not a good thing for the PC's. They may get away with the treasures & relics of the upper house but the fact that Hades will not be denied. Or will he? 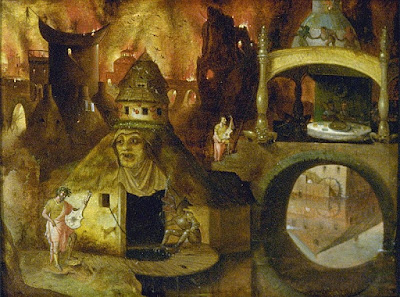 We know that the Outer Gods have their parts in the cosmic cycle & the crazed cultists of B4 The Lost City worship a very nasty entity known as Zargon The Returner. There are some suggestions that Zargon was the first ruler of the Nine Hells or a Demon Prince of the Abyss thrown out of the infinite foulness. But some dungeon masters that I've recently talked to suggest that Zargon may be a yet another facet of the Crawling Chaos  Nyarlathotep. If this is the case then the PC's might have to appeal to the entity to reign in Hades. Hades by the time of Zothique may have joined his fellow Greco Roman gods as one of the lesser gods of Earth. The relationship of these gods is depicted as Earth's future being transformed into HP Lovecraft's Dreamlands. These gods are protected & shepherded by Outer Gods. This is depicted in HP Lovecraft's The Outer Gods.
There will be death & worse in this adaption. PC survival is going to be tested to the absolute limit in this mini campaign. 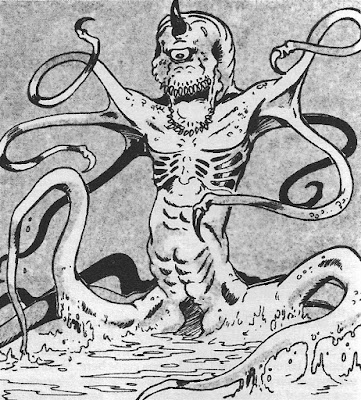 The house with its relics & artifacts could exist across a wide variety of space times in a variety of Prime planes. This has the house existing on the edges of the Diamond Desert in Hyperborea in Astonishing Swordsmen & Sorcerers of Hyperborea. Why? Because its agents are quietly recruiting adventurers for sacrifice to Hades. The house is far too tempting of a prize to resist. This same structure could be existing on the fringes of the Bright Desert  in Greyhawk. This structure far too unimportant & unassuming to grab the attention of the dieties of Greyhawk so far.

In more pulp oriented modern games such as Amazing Adventures! rpg by Troll Lord Games. The competing animal headed cultists of Hades secure adventurers & heroes in dark alley ways & the like to brave the machinations  of the house & its traps! Here are a few ways the horrors of the house can be used in a campaign: