OSR Commentary On C2 ""The Ghost Tower of Inverness" (1980), by Allen Hammack With A Bit of Clark Ashton Smith For Your Old School Campaigns 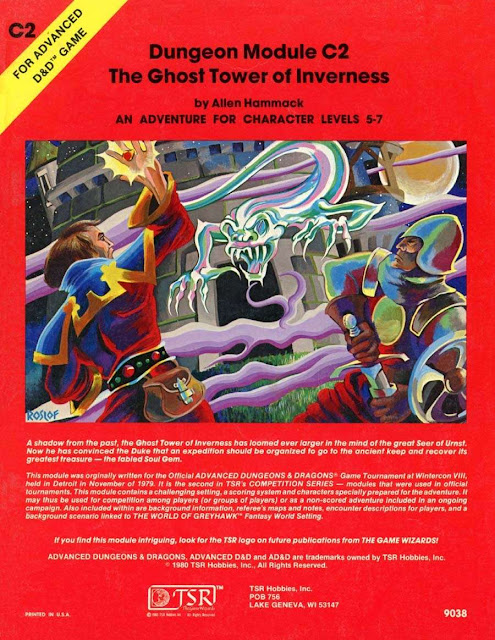 "A shadow from the past, the Ghost Tower of Inverness has loomed ever larger in the mind of the great Seer of Urnst. Now he has convinced the Duke that an expedition should be organized to go to the ancient keep and recover its greatest treasure - the fabled Soul Gem. This module was originally written for the Official ADVANCED DUNGEONS & DRAGONS Game Tournament at Wintercon VIII, held in Detroit in November of 1979. It is the second in TSR's COMPETITION SERIES - modules that were used in official tournaments. This module contains a challenging setting, a scoring system and characters specially prepared for this adventure. It may thus be used for competition among players (or groups of players) or as a non-scored adventure. Also included within are background information, referee's maps and notes, encounter descriptions for players, and a background scenario linked to the WORLD OF GREYHAWK Fantasy World Setting."

Nineteen Seventy Nine seems to have been  a banner year for modules & one that I love to refer back to is the ultimate in 'fun house dungeons'. Yes I'm talking about the infamous C2 The Ghost Tower of Inverness competition module.  ""The Ghost Tower of Inverness" (1980), by Allen Hammack, was the second adventure in the competition (C-) series. It was published in 1980." I'm not sure what it is about this module but I've got a very large soft spot for it.

This module has direct & deep connections to the campaign world of Greyhawk;

"The backstory to C2 has some fairly important implications for the history and development of Greyhawk, due to the age of Castle Inverness:

Know you that in the elder days before the Invoked Devestation and the Rain of Colorless Fire, when the ancient peaks of the Abbor-Alz still thrust skyward sharp and majestic and the Flan tribesmen were but newcomers to the land, there existed between the Bright Desert and the mouth of the river Selintan a great fortress called Inverness . . .  Know you also that here was said to dwell the great wizard Galap-Dreidel at the height of his power and glory, and that he did lift the Castle Inverness from the very foundation of rock upon which it rested. [citation]"

This information comes straight from the Greyhawk on line page & it has many connections across the board to  the Flanaess. But that's never stopped me from taking full advantage to draw in the ghost tower deeper into whatever campaign world  I'm currently running.  For me the tower is one which has many different aspects across the planes so there's a Ghost Tower on Mystara . The classic Modules and Adventures in Mystara article by Bouv  from the Vaults of Pandius site has some ideas on the towers placement.
For me it comes back to Clark Ashton Smith & Jack Vance's wizards. These are beings whose very works can define reality of their respective worlds. Now most folks would think that I'd reference the excellent  Xiccarph cycle of Clark Ashton Smith. No instead I want to focus on CAS's "The Dark Eidolon" . The tale of course  chronicles the life and death of the dread sorcerer Namirrha. Namirrha is the complete opposite of the wizard who constructed the ghost tower. But their are striking similarities. Both of these high level wizards are busy rearing edifices that defy their local time & space continuum's technological level & the mere laws of physics. The Nerd Redfined site has a very good overview & break down of Namirrha.
But this begs the question if there are such towers across the multiverse could they lay in wait for unwary heroes? Surely there are no such weird towers in say classic comic books?! Well actually the DC universe has one of its own that has rooms that look like they were designed by M.C. Escher. I'm speaking of course of DC's own sorcerer supreme Dr. Fate & his tower. 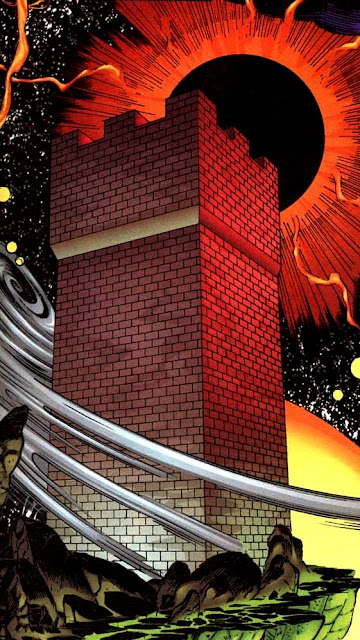 Artwork used without permission but not as a trade mark or copyright challenge.

The tower of Fate appeared in More Fun Comics #58 (August, 1940) & has served as the focal point for some of the most important events in the DC comic book universe. The Ghost tower has  served in some of the most important PC's deaths over the years. Countless parties have ventured into its depths & yet few have survived its tricks & traps. The fact that its a competition module makes this all of the sweeter. Could it be that the real reason that the ghost tower hasn't been brought to heel like so many other dungeons is the fact that it serves another function? Could C2 tower actually be a playing board between the gods & various high level wizards? We know that the tower itself is from another age. But is this because its halls serve as the battle ground for the amusement of the gods & their opponents. If this is a fun house dungeon then for whom is it fun for?
The  answer lies within its history & connections to some of the greatest disasters of Greyhawk's history.  Now of course the gods & wizards amuse themselves at the perils of mortals within the tower. 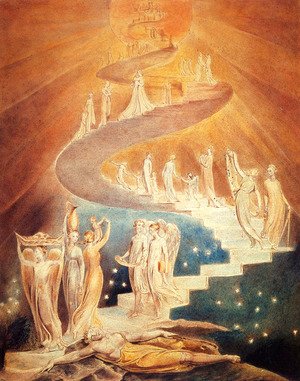 I've seen C2 described as a 'killer dungeon' numerous times but I think that its part of its form & function. The adventure is described for PC's of levels five through seven. Confession time I've used it with much higher level PC 's & its just as lethal.
Is there a malevolent intelligence behind the the tower? Well yes in my campaigns the ghost tower has been run by any number of dimensional travelers who have served the tower. The form & function has been the same. The tower moves from place to place & kills off adventurers according to its ancient function that was created so many thousands of years ago. The magicks of the tower are as potent as the day it was created. I've used the ghost tower with lots of OSR retrclone systems especially Astonishing Swordsmen & Sorcerers of Hyperborea, Labyrinth Lord, AD&D first edition & my upcoming Amazing Adventures!/ Demi god campaign.

Because the legends of the ghost tower are so tied in with Greyhawk over the years, I've used this adventure to get PC's to Greyhawk if they've survived. The campaign world is so iconic that its not hard to get players into the Greyhawk mind set. I've also gathered PC's from across a wide range of TSR campaign classic settings such as Mystara, Blackmoor, Greyhawk & points beyond.
This really speaks to the adaptiveness of C2 ""The Ghost Tower of Inverness". There are lots of detractors out in the OSR for this module but still love it. Having this location in an old school or OSR campaign setting is guaranteed to spark interest & perhaps a lot of caution.
Posted by Needles at 8:13 PM