Tonight wasn't your typical Astonishing Swordmen & Sorcerers of Hyperborea game session; instead everyone played a space ranger (read fighter) for a great Halloween game when my friend Steve blew into town on a Thursday night. 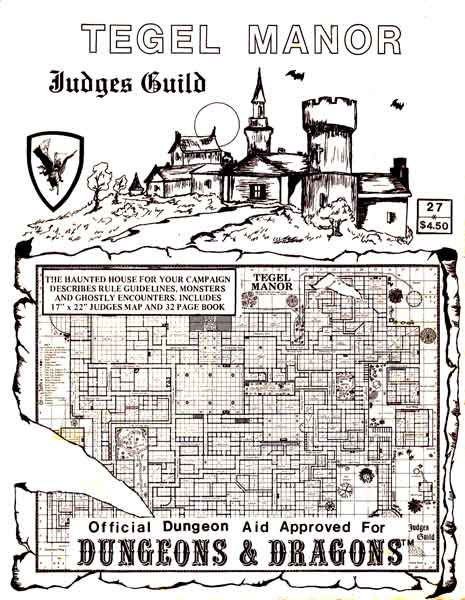 During tonight's adventure within Tegel Manor I had a party of adventurers in what they thought was a standard '30's pulpy science fiction romp. Nothing could be farther then the truth as our adventurers entered the haunted halls with simple blasters drawn! Yes that's right it was a quick Halloween themed game with our heroes drawn through a worm hole into the haunted halls of my version of Tegel Manor! 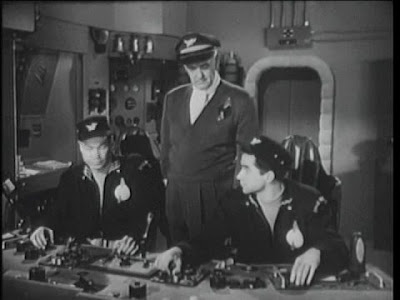 Our heroes managed to escape death at the hands of two spectres & a bunch of wraiths in a pantry of the house. They went looking for a set of klystron relays for their ether ship and barely managed to dodge a vampire's advances and attack. The vampire claimed two members of the good ship USS Monroe before being chased off by zeta ray blasts. 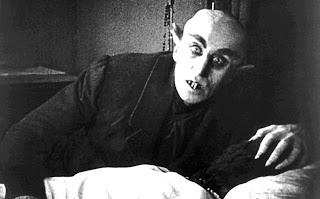 The party managed to get to one set of  klystron relays from the laboratories within the manor that belonged to an alchemist who had a set of the relays which he had traded some alchemically made gold for. The party had to fight their way past a group of serpent men who were going to raid the lab for certain herbal chemicals. The resulting fire fight destroyed or set on fire at least two rooms before being doused by a handy spell scroll. Most of the party of adventurers made it back to the wormhole gate & back to the USS Monroe with little effort. But not all of them made it through. Four of the away team were left behind and faced down a nasty surprise. After the smoke break I unleashed my second nasty surprise a stone cold killer from the free Neoplastic Press's Night of the Slashers OSR rpg . Earlier in the day I had generated a strange faceless killer from the dice drop & minimalist rules of the game in about ten minutes. 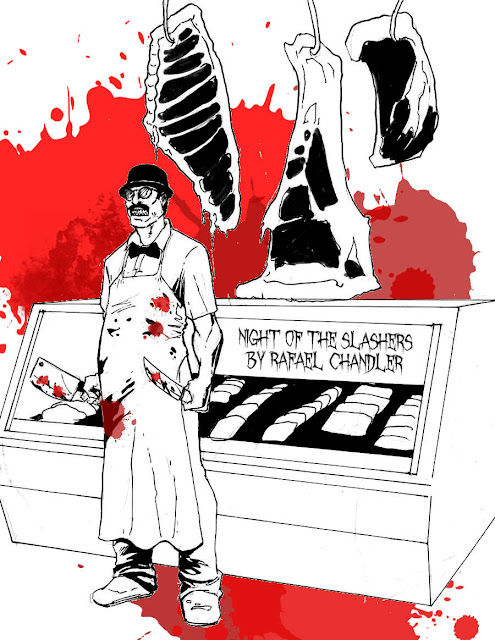 'The Samhain man' took out two PC's with silver plated hooked short swords & managed to get himself eaten my a man eating plant in the solarium. But he came back after 7 rounds for more punishment. Bits & pieces of the killer kept dropping off because of repeated blaster fire but he kept coming until the party found his strange puzzle box shaped relic that returned his vengeful spirit to Hell.
'The Samhain man' has a special pair of relic short sword weapons called 'Moonbeam' & 'Cold Gaze' both of these blades are magical weapons of +2 enchantment. They are made of solid steel etched & plated with silver. Should they be lost from the killer's hands they will teleport back to him in two rounds. They are thirsty blades & anyone picking up must make a save vs spells roll or be inflicted with a murderous blood lust & berserk rage. In this state the wielder of the blades gains a +1 to all melee attacks.
The PC's made it back to the Monroe and survived the evening but another party of fools errm adventurers has to face the vengeful spirit of  'The Samhain man' on Saturday night!
Posted by Needles at 12:01 AM