"Captain's log, stardate 3018.2. Crewman Jackson is dead... and there are no apparent physical causes. Mr. Scott and Mr. Sulu are still out of touch on the planet below. Leaving Assistant Chief Engineer DeSalle in command of the Enterprise, I'm beaming down to the planet's surface to find my two missing crewmen... and discover what killed Jackson."

The fact is that I'm a bit sick, I had to wash out the taste of bad Star Trek tonight after attempting to watch 'Star Trek Discovery' known among Trek fans as STD. So I went back to the original series Star Trek tonight after dealing with some Roger Corman Poe films with my dad. I rewatched original Star Trek series episode Catspaw. Let's get the wiki history out of the way first;""Catspaw" is an episode of the second season of the American science fiction television series, Star Trek. It is episode #36, production #30, and was first broadcast October 27, 1967, and repeated on May 24, 1968. It was written by Robert Bloch, and directed by Joseph Pevney. This episode was the first filmed including series regular Pavel Chekov, as depicted by Walter Koenig, although its airing was delayed to coincide with Halloween, by which time several other episodes featuring the character had been broadcast."
The funny part was when they showed who wrote Catspaw. Yup that's right Lovecraft circle alumni  & Psycho author Robert Bloch. Yeah the gears are already turning here. 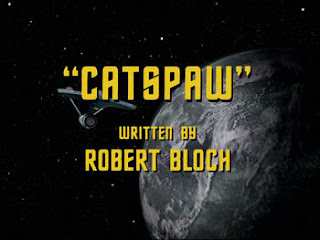 The plot is pure Gothic set dressing;'On stardate 3018.2, the Federation starship USS Enterprise, under the command of Captain James T. Kirk, explores the apparently lifeless planet Pyris VII. Chief Engineer Scott, Lt. Hikaru Sulu, and crew member Jackson are sent down to explore the surface. The ship soon loses contact with Scott and Sulu; Jackson is transported back to the ship, but falls from the platform dead. His lifeless body emits an eerie voice, telling Captain Kirk that the Enterprise is cursed and must leave the planet immediately, or everyone will die.
Kirk beams down with First Officer Spock and Chief Medical Officer Dr. McCoy to search for the missing crewmen. The landing party comes upon three apparitions that appear as witches, who warn the landing team not to proceed any further. The team ignores the warnings and discovers what appears to be a medieval castle.
Upon entering the castle, the landing party comes across a black cat that wears a sparkling diamond pendant. As they follow the cat, the floor collapses, and the fall knocks them out. When they come to, they find themselves held in irons in a dungeon. Scott and Sulu soon appear as mindless zombies, controlled by an unknown force. Kirk and the others attempt to overcome them but find themselves teleported to another part of the castle, where they encounter a robed man, Korob, and the black cat, whom he appears to consult for advice. Spock questions Korob about why previous surveys of Pyris VII indicated no life on the planet. Korob replies that he is not a native of the planet.
The cat leaves the room, and Korob's beautiful colleague Sylvia soon appears. She wears a diamond pendant, identical to the cat's, around her neck. When Kirk demands that Scott and Sulu be released, Sylvia dangles a miniature model of the Enterprise over a lit candle, and the crew of the real Enterprise reports a rapid rise in hull temperature. Kirk reluctantly surrenders and offers to cooperate.'

So once again we get the Enterprise at the mercy of an all powerful set of aliens or is it one alien intelligence. Well, I personally think its the former. Both Korob & Sylvia use the trappings of witchcraft with a flavor of the Shakespearean throw around them for good measure. Both of these aliens play the crew of the  Enterprise like a harp from Hell in this classic episode. But its the transmuter that really gives away these two's identity here's the break down from the Memory Alpha website;'The transmuter was, essentially, an amplifier, permitting mental impulses to shape the physical world. The explorers Sylvia and Korob used it to enter the Milky Way Galaxy from wherever they originated. It also enabled them to restructure matter, transport themselves from place to place, exert mind control, affect the physical world in various ways, and to perform other feats, including some that resembled sympathetic magic.'
We'll get to the 'sympathetic magick' connection in a moment but I think what we're really looking at is one intelligence belonging to a very dangerous wizard member of the Great Race of Yith.

Where have we seen the transmuter technology before? And why wasn't the Enterprise crew impressed with it? Because they've known about it ever since Commander John J.Adams encountered it on Altar IV. The transmuter represents a mini Krell machine ala the film 'Forbidden Planet' from 1956.
"Commander John J. Adams: Monsters from the subconscious. Of course. That's what Doc meant. Morbius. The big machine, 8,000 miles of klystron relays, enough power for a whole population of creative geniuses, operated by remote control. Morbius, operated by the electromagnetic impulses of individual Krell brains.
Dr. Edward Morbius: To what purpose?
Commander John J. Adams: In return, that ultimate machine would instantaneously project solid matter to any point on the planet, In any shape or color they might imagine. For *any* purpose, Morbius! Creation by mere thought."
So is this a Yithian plot to establish a beach head in the Star Trek universe? No, I think its a Yithian wizard exploring an alternative time line & using some of the matter transmuting technology of his race. What we are looking at is a truly alien Yithian mind amusing itself and toying with the Enterprise crew. I think what your looking at is a god like Yithian intelligence that is another member of the cosmic level wizard's club that Maal Dweb & Jack Vance's Dying Earth's wizards belong to. 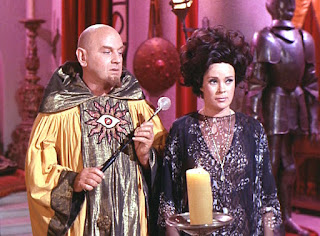 We get a really good profile of the workings of a humanoid mind from Clark Ashton Smith's 'Flower Women';
'There is but one remedy for this boredom of mine,' he went on — 'the abnegation, at least for a while, of that all too certain power from which it springs. Therefore, I, Maal Dweb, the ruler of six worlds and all their moons, shall go forth alone, unheralded, and without other equipment than that which any fledgling sorcerer might possess. In this way, perhaps I shall recover the lost charm of incertitude, the foregone enchantment of peril. Adventures that I have not foreseen will be mine, and the future will wear the alluring veil of the mysterious. It remains, however, to select the field of my adventurings.'
"Mazirian the Magician" from Jack Vance's Dying Earth series of stories is another prime mover across space & time. Wizards pitting themselves against one another across various realities is the stuff of Philip Jose Farmer's World of Tiers. 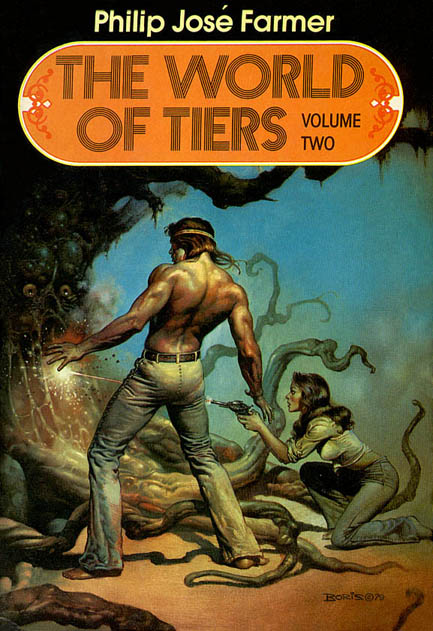 The cosmicism of the events of Catspaw seem laughable as a part of some bad cosmic joke but there's more to it. What is cosmicism? 'cosmicism(uncountable) The literary philosophy developed by the American writer H P Lovecraft, stating that there is no recognizable divine presence, such as God, in the universe, and that humans are particularly insignificant in the larger scheme of intergalactic existence.'
All of this ties right back into Greyhawk & Blackmoor, locations such as the Temple of Evil serve as anchors in reality & points in dimensions of power where 'wizards' & gods battle in ancient cold wars that can take billions of years in Einstein time. For all of the vaulted talk of insanity inducing alien concepts the central cosmicism of these stories, etc. render the stakes even higher.  The cosmicism of the Temple of Elemental Evil adventure by Gary Gygax & Frank Mentzer would seem at odds with the tradition of Sword & Sorcery literature but its roots go all the way back to Shakespeare. Earth, Greyhawk, Blackmoor, etc. aren't simply cosmic backwaters these are high water points in cosmic battles happening across space & which might mean something or nothing. The fact is that in the 'Old Solar system' Earth has returned to its place of importance or lack there of. Mankind can't always comprehend the shape of aliens but we are sometimes can effect a moment of being the fulcrum for a cosmic change. If we look back over millions of years Pyris VII from Catspaw might have been one more of those battle ground or adventure locations. In fact the castle in my mind bares a striking resemblance to the temple of elemental evil in the classic cover artwork for the module. 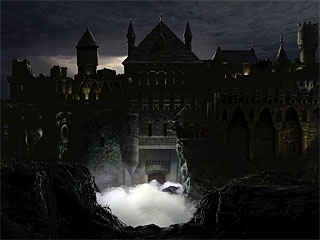 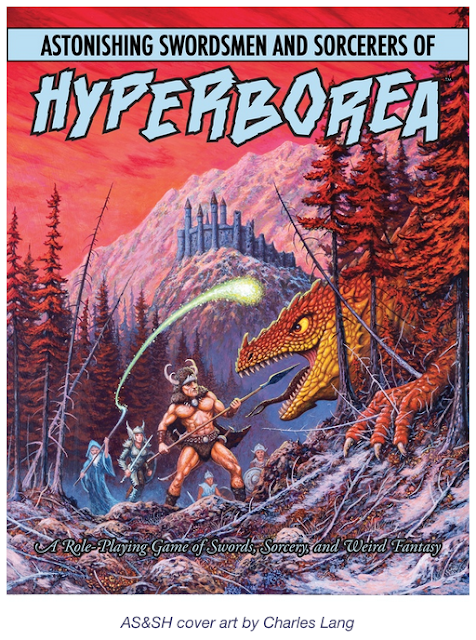 Hyperborea in my games sits out near Saturn & whist the Borea winds blow remains & remnants of other realities across the void. Mankind is no longer top dog but then neither are any of the other Lovecraftian races. Second edition Astonishing Swordsmen & Sorcerers of Hyperborea really slams home this point. The lone insane wizard  of Pyris VII might be just the sort of encounter that adventurers are likely to run into in certain regions of Hyperborea. In short Catspaw is one wizard desperately trying to recapture the magick of a battle long over or one that hasn't happened yet. The corrupting echoes from the elemental religion continue to haunt the space ways of Earth. But we'll talk about that soon.