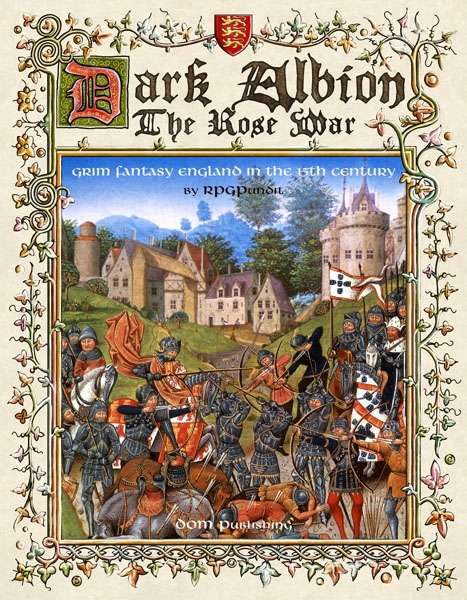 So Rpg Pundit talked about using his Dark Albion books for a complete Science Fiction campaign & mixing it with White Star. Yeah I don't think so, sorry Pundit I think that White Star is far more 'Star Wars' then 'the Dune like' complexities of Dark Albion. And no I don't think 40K is even a remotely good vehicle for this style of campaign. 'Dark Albion's' take on Chaos is far more nuanced & far less of the nihilist double bladed sword approach that the 40K universe takes. So put it in park as I take you on a far weirder tour of another epoch of  a Weird Tales style campaign with a side angle of Clark Ashton Smith's Zothique , Dark Albion, & Astonishing Swordsmen & Sorcerers of Hyperborea Second Edition. Now bare in mind that the following is a thought exercise. Your going to need both Dark Albion & Cults of Chaos for this because they work very well with AS&SH first & second edition. 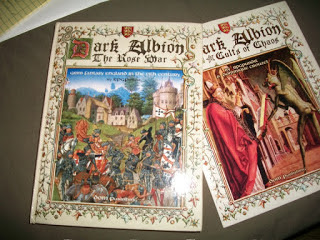 When we begin looking into Zothique through the letters of Clark Ashton Smith there's an interesting clue. Clark Ashton Smith himself described the Zothique cycle in a letter to L. Sprague de Camp, dated November 3, 1953: "Zothique, vaguely suggested by Theosophic theories about past and future continents, is the last inhabited continent of earth. The continents of our present cycle have sunken, perhaps several times. Some have remained submerged; others have re-risen, partially, and re-arranged themselves. Zothique, as I conceive it, comprises Asia Minor, Arabia, Persia, India, parts of northern and eastern Africa, and much of the Indonesian archipelago. A new Australia exists somewhere to the south. To the west, there are only a few known islands, such as Naat, in which the black cannibals survive. To the north, are immense unexplored deserts; to the east, an immense unvoyaged sea. The peoples are mainly of Aryan or Semitic descent; but there is a negro kingdom (Ilcar) in the north-west; and scattered blacks are found throughout the other countries, mainly in palace-harems. In the southern islands survive vestiges of Indonesian or Malayan races. The science and machinery of our present civilization have long been forgotten, together with our present religions. But many gods are worshipped; and sorcery and demonism prevail again as in ancient days. Oars and sails alone are used by mariners. There are no fire-arms—only the bows, arrows, swords, javelins, etc. of antiquity. The chief language spoken (of which I have provided examples in an unpublished drama) is based on Indo-European roots and is highly inflected, like Sanskrit, Greek and Latin."

This campaign is going to be a prequel to the events & stories of Zothique in keeping with the Theosophic theories about past and future cycles of history. Now imagine if you will that in the chaos following Hyperborea leaving for space as mankind is cast into ruins. Feudalism comes back into vague as the ruling style of government & the old gods return. Sorcery and demonism prevail again in the disasters that follow. Think less 'Thundarr The Barbarian' and far more classic CAS. Mankind barely hangs on to the secrets of gunpowder as sword play & feudal warfare becomes the order of the day. What was France has fallen to the toad god and its demonic ilk. The Unconquered Sun shows brightly on the face of his chosen and what was England's history is a mix of Rome Empire ancestor & history worship. Fashions of the past are in vogue and Albion is barely hanging on. Couple this with the fact that the Elves of Dark Albion are crawling from their caves & round hills to claim  humans as their own through cults and whatnot. All of the while undermining the empire from within. 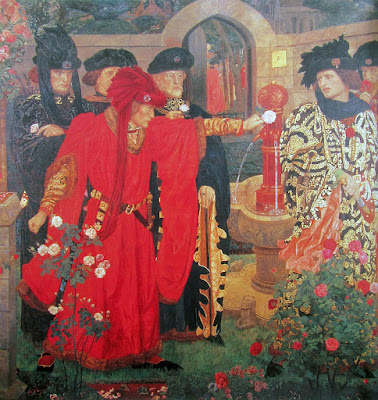 Artifacts & relics of bygone eras are worth a king's ransom & adventurers are risking everything in the caverns, caves, and ruins for anything of the so called 'golden ages of mankind'.  The countrysides & deserts are rife with cults of Chaos & decedent goings on as magick with a 'K' creeps back into the world. Inquisitors are busy as sin trying to root out the frog god's cells & the Deep Ones infiltration of the ports & trade routes.
Don't get rid of the gun powder or siege weapons  because its needed to face down some of the horrors that have been seen out at sea.  This is a time of ruin & kings as an Empire here teeters on the brink of down fall under a bloated red sun!
Real world history events here play out just as they would lock stock and social tiers. 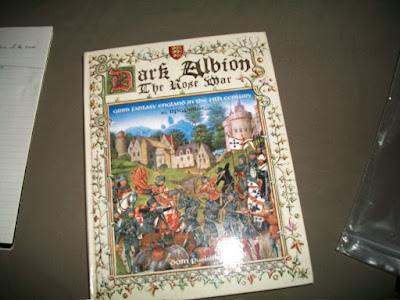 To flip this campaign concept further on its ear this could take place thousands of years before the events of Zothique at the height of the Hyperborean empire. The Hyperboreans are on the wane & the humans are beginning to flex their muscles in government & trade again. Cults of Elven worshipers are undermining the Hyperboreans rule with heretical cults offering an alternative as a Dune like dizzying array of characters play feudal chess with the governments. At the edge of the empires inhuman things are creeping in as demon worship threatens everything even remotely human. France threatens to invade as cells of frog cultists and worse act as 'fifth columnists throughout the countryside with inquisitors and adventurers trying to ferret them out. 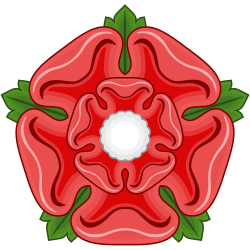 Ancient monsters such as vampires, lamia, etc. which haven't been seen for two thousand years now rule empires of barbarians towards what was once Russia & Romania. They're sweet offers of alliance & worse are warned about in the highest levels of the court. Meanwhile there are rumors of fragments of Hyperborea that the astrologers have seen in the skies. Inquisitors descend upon royal cells as demons whisper sweet nothings of advise to druids in sacred groves and many others in throne rooms across what was Europe.

Forget not using Dark Albion rule book your going to need it due to several factors:
1. Even lower level PC's are going to have an effect on the world setting around them
2. The magic & occult of Dark Albion doesn't really impact AS&SH's magic system in fact in some respects it enhances it.
3. Alchemy could play a great deal in the setting. DM's are going to have to divide out how and where its impact might greatly be felt.
4. Gunpowder isn't going to make all that much difference to game play and in a world where fire balls can be used might be a detriment of epic proportions.
5. Dungeon masters should take a look at Clark Ashton Smith's Averoigne story cycles for some possible inspirations & adventures to crossover with this campaign.
6. DM's should use the artifacts & relics of AS&SH sparingly because they can literally change the course of the Rose War.
7. CAS's cycles of science fantasy lend them well to having this style of campaign perhaps being a place where AS&SH adventurers might visit or die?


Of course all of this is simply a thought exercise to see how far the Dark Albion setting can be taken along with my love of Clark Ashton Smith's literary work. Not to mention my love the new Astonishing Swordsmen & Sorcerers of Hyperborea second edition which lots of people are gushing about these days.
Posted by Needles at 10:27 AM