New OSR Monster - The Ningen For Your Old School Campaigns Beautiful, elusive, & mysterious the first of the Ningen ( translates as “human” in 'Old Earther) emerged from the Antarctica waters near what was once Japan shortly before the start of the Tremor events. These mysterious beings are hunted by & fed upon by the Tcho-Tcho tribes of Tsing near the edge of the warm waters of Antarctica. Peaceful,elusive, & very passive these monstrous humanoids seem to insight the most malevolent blood lust in the various races of the monstrous Mythos bloodlines.
The aquatic tribes of Gnophkeh are also known to hunt these creatures within the frigid waters around parts of the North polar waters & speculation is that these monstrous beings were developed as a food animal by the Elder Things eons ago. The  Gnophkeh hold horrid rites with the rotting corpses of these massive creatures.
Recent upheavals on 'Old Earth' has displaced pods of them and relocated them throughout the world seas. 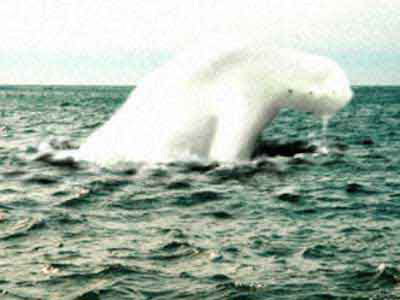 It is known that these beings bare a surprisingly lot in common with several species of humanoid like aquatic and swamp creatures of 'Old Venus'. These massive whale sized beings have who have a human-like shape, often with legs, arms, and even five-fingered hands. They are passive, mysterious, often fleeing from any encounters they can with a slick of foul smelling oil like musk that causes 'fear' as per the spell in those that smell this horrendous sickening scent. The slick will be deposited in the water in a twenty foot radius and spreading in a 600 foot radius at its largest point be fore dissipating into a strange foam like substance. Their facial features are weird and strange causing 'confusion' in those who stare into the abyss like depths of their eyes which seem to search the souls of those who look into them.
The Ningen are powerful swimmers & can dive miles underwater into the watery depths. Their mating habits & life cycles remain mysterious, totally alien to the human scientists and alchemists of the city states. Even the Hyperboreans have little in their lore about these creatures.

A wind comes in from the sea,
And rolls through the hollow dark
Like loud, tempestuous waters.
As the swift recurrent tide,
It pours adown the sky,
And rears at the cliffs of night
Uppiled against the vast.

Like the soul of the sea—
Hungry, unsatisfied
With ravin of shores and of ships—
Come forth on the land to seek
New prey of tideless coasts,
It raves, made hoarse with desire,
And the sounds of the night are dumb
With the sound of its passing.
The Soul of the Sea  (1912)
by Clark Ashton Smith