"A King's Commission leads to danger!
All communication with the barony of Twolakes Vale has ceased. King Ericall, worried about the security of his border and angered at the loss of tax revenues, has commissioned you, a delegation of powerful adventurers, to investigate. This is not a petty problem to by solved by the armies of local nobility. Indeed, the king's forces are desperately needed elsewhere. Twolakes Vale is, after all, only a small barony on the far frontier of Ericall's domain.
And yet? The cloud is there, its nature and cause unknown. None have returned for the barony for weeks. Furthermore, the cloud is spreading, and vague reports of unrest and mysterious disappearances are starting to trickle in from nearby baronies.


Can you discover the secret of Two Lakes Vale?"So I was at the local shooting range target shooting today with Steve after which we went to a local brew house to talk about his Astonishing Swordsmen & Sorcerers of Hyperborea second edition campaign & my modifications to Garry Spiegle  high level B/X adventure CM2 Death's Ride for characters levels 15-20.
"Death's Ride (ISBN 978-0-88038-117-8) is a 1984 adventure module for the Dungeons & Dragons roleplaying game. Its associated code is CM2. The module was designed by Garry Spiegle, with cover and interior art by Jeff Easley." Its been a long dark ride since two thousand & fifteen folks, two years have passed & there's a lot of blood under the bridge so to speak. Its been a long while since I've cracked this bad boy open & began to modify it out. Sword & Sorcery is a tricky beast at best & one of the tricks is keeping the players interested when they get to higher levels. This is a weird beast of a B/X module & it requires a bit of a light touch to DM. But it requires a heavy hand to run. For my part I'm going to be running this using two resources one is the Adventurer, Conqueror, King Rpg system & mixing it up with Astonishing Swordsmen & Sorcerers of Hyperborea Second edition as the campaign setting. ACK's is going to actually be powering this CM2 Death's Ride for a few reasons. One ACK's handles CM2's wargaming aspects better then AS&SH, two the there are several monsters, spells, etc. which are readily available in ACK's, & three CM2 is a perfect Halloween adventure. Death's Ride has an extensive area to D&D DYI in & it's one of the adventures that really allows the necromancer class to become 'the Swiss Army Knife villain' they were meant to be.

Since the barony is cut off from the rest of Hyperborea its possible to run this as if a mist from the Outer Darkness has infected the land. Steve was telling me about using the plane of Shadow as a sort of planar shadow cast by the sphere of Entropy. This was something that we had talked about doing about nine months ago. He also brought me a present in the form of ACK's Encounters & Lairs but that's blog entry for another time. CM2 Death's Ride features lots of 'new' for the time necromantic monsters & situations. Because of the layout and ideas in CM2 its possible that the  The Barony of Two Lakes Vale might have been the sight of some of the nastiest fighting between the Hyperboreans & the humans of the area.
"Mmatmuor and Sodosma were necromancers who came from the dark isle of Naat, to practise their baleful arts in Tinarath, beyond the shrunken seas. But they did not prosper in Tinarath: for death was deemed a holy thing by the people of that gray country; and the nothingness of the tomb was not lightly to be desecrated; and the raising up of the dead by necromancy was held in abomination."

The Empire of the Necromancers 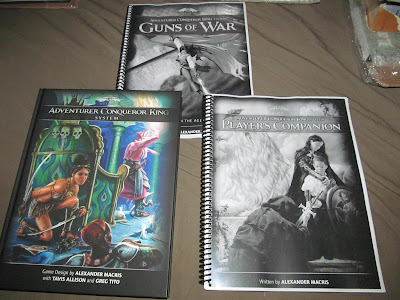 So why I'm I saying this because the stench of undeath reeks throughout the entire module. The cloud, the zombies, 'the Death Portal' are all things that are going to require the DM to scale the adventure to the PC's levels & abilities. Done correctly and this module could be used as a across point between PC's & post apocalyptic game making this a perfect module to marry up with 'a  Night of the Living Dead ' movie style mini adventure. Now wait before you tar & feather me to ride me out of town on a D20. B/X dungeons & Dragons which ACK's is based on easily crosses over with the damage thresholds of both Gamma World first & second edition as well as Mutant Future. 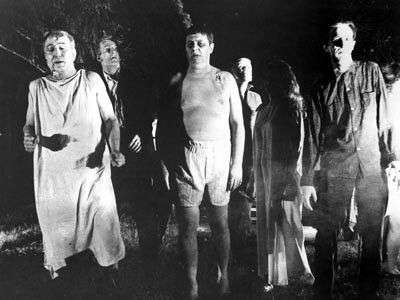 When you start to look at the possibilities of what might have happened within 'The Barony of Two Lakes Vale' its easy to see that a crossover with 'Old Earth' is possible. The entire region might be infected with 'ghoul plague' or the weird radiations possibly left over from the war machines of the Hyperboreas. Ulslime, Wazor and Korbundar are taking advantage of this fact & exploiting the Hell out of it. This whole region might have sinks of evil & ruins that serve as necromantic cult cell holdings. PC's taking over these areas are going to have to deal with repeat infections & the horrors of the undead as long their rulers here. 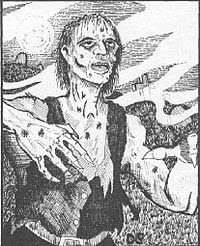 To pull this style of Halloween game off there's several things that are going to weight heavily on the dungeon master. He's going to have to put in the time to modify out the module to his or her specifications. Don't be afraid to spread in some science fantasy artifacts, there should be hints of other dungeons & ruins, wizards from across the planes might become a problem. Add in and expand upon the alien nature of the adventure. Think of this adventure as another stepping stone of getting the PC's to have some fun with this. 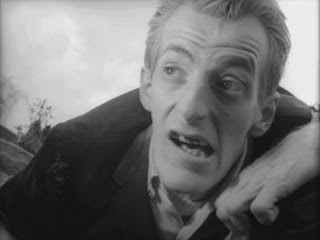 Portals, planes, a bit of dimension hopping can add into the unpredictability of running CM2 Death's Ride as part horror adventure, war gaming, & part dungeon/wilderness crawl. This is going to give CM2 a very unpredictable edge to its handling of a possible campaign mini adventure run.  Its also possible to flip this whole idea on its ear and then have the 'The Barony of Two Lakes Vale' be someplace that crosses over with the Shadow plane with its undead menaces almost but not quite being a Stranger Things style series of encounters. Just because the PC's stop the Death Portal doesn't mean that the undead horror goes away. They might be encountering them for ages to come as different necrotic cult cells try to open the doorway for more weirdness.
And here's where events, necrotic cults, & more can be tied into Clark Ashton Smith's Zothique series as a setting or Astonishing Swordsmen & Sorcerer's Ghost Ship of the Desert Dunes where the in the depths of Diamond Desert lie the skeletal remains of Ymir’s Serpent, a legendary Viking longship. 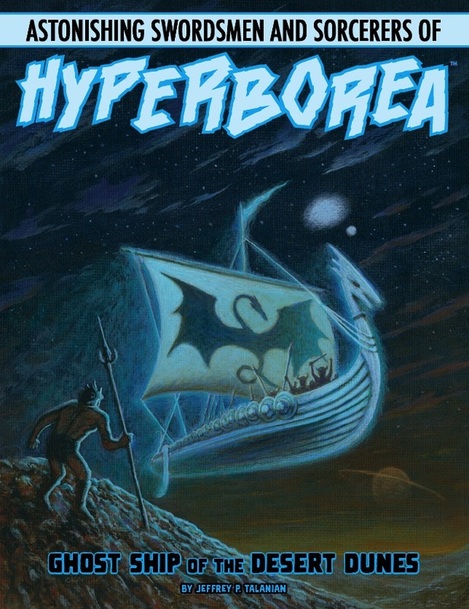 Sometimes claiming the domain isn't as simple as defeating an enemy, sometimes undying enemies have a way of turning up again & again. We'll get into how next time folks!