" Giants have been raiding the lands of men in large bands, with giants of different sorts in these marauding groups. Death and destruction have been laid heavily upon every place these monsters have visited. A party of the bravest and most powerful adventurers has been assembled and given the charge to punish the miscreant giants." 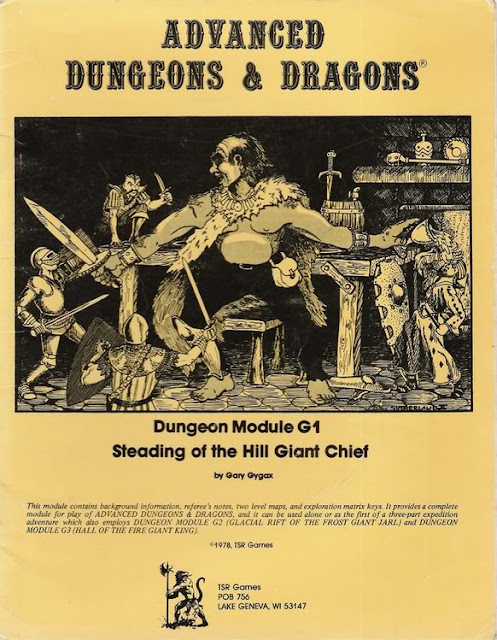 Alright its Thursday September fifth & to my amazement my take on adapting Temple of Elemental Evil to the 'Old Solar' system setting went rather well I think.So I'm going to talk about the first in 'Against The Giant' series of adventures which I run numerous times. So today I'm going to quickly talk about the first in the series G1 Steading of the Hill Giant Chief By Gary Gygax.  Now this might not seem to be a good choice to run with an 'Old Solar system' setting but actually there are numerous references to giants & Lovecraftian giant like races in Clark Ashton Smith's Hyperborea cycle.  Now I've written before about,"The hill giants are closer to the mountain giants (bergrisar) of Norse mythology which might mean deeper connections to the lands of Jötunheimr & Hyperborea. Mountain giants crossing over into the depths of space in their long ships to raid the lands of Hyperborea is a romantic notion but not the only option. I can also see them crossing through elemental Earth gates for dimensional raids through Underborea." But in fact the giants that we see in G1 are closest to the Formorians of Smith's mythology indicates that their actually giants from the the Eemian Interglacial (130,000-70,000 B.P.) period. They haven't been seen on Earth in a long time & might have recently within the last 700 or so years come from the inner Earth along with the subterranean civilization, the empire of K'n-yan.
Possibly existing in some hidden pocket under Earth eco system waiting for when the stars are almost right. They're the remains of a now former vassal giant state of the  Hrímþursar. They were used as shock troops, warriors, etc. by the far more advanced giant tribes.
I have a tendency to think of the mountain giants (bergrisar) as slight more advanced then the Formorians of AS&SH fame even though the two breeds of giants interbreed & raid one another. The Formorians are also subject to far more genetic and horrid mutations as a result of their interaction with  the toad god Tsathoggua & the Ice Worm. 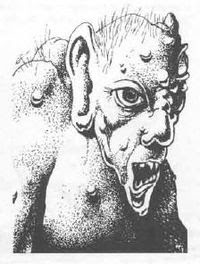 Adventuring in 'Steading' is going to require work, and should only be attempted by high level PC's. The giants are on the move because of the elemental cult & see it as a time when they can reclaim their heretical mantle as Cykranosh comes into its alignment. There might be hints that the  svartálfar have some some hand in this with clues left behind. The Formorians of 'G1 Steading of the Hill Giant Chief' are going to nasty, dangerous, very Lovecraftian and far more then the players are expecting. You can expect a short and squat statue  of Tsathoggua burning by one of the fires. He's just the sort of god you could expect from Formorians
" He was very squat and pot-bellied, his head was more like that of a monstrous toad than a deity, and his whole body was covered with an imitation of short fur, giving somehow a vague suggestion of both the bat and the sloth. His sleepy lids were half-lowered over his globular eyes; and the tip of a queer tongue issued from his fat mouth. In truth, he was not a comely or personable sort of god"
But let's talk about really getting into the heart of the adventure:
"The bulk of the adventure takes place in two locations: the upper level fortress of the hill giants' lair, and the dungeon level beneath it.[1] In the upper level there are halls, barracks and common rooms. These rooms house Chief Nosnra and other hill giants, ogres, and servants. " Yeah these would be the areas in which the PC's run into the  bestial Voormis slaves of the Formorians perhaps stumbling upon a graven image of White Sybil of Polarion to give the PC's a vital clue as to the coming of the ice giants!
The DM might want to place the adventure within the shadow of a newly risen chain mountains in the form of  the Eiglophians &  its dire  Mt. Voormithadreth which dominates it. There could be treasures from the  ruins of capital Commoriom perhaps cursed and very deadly. And G1 Steading of the Hill Giant Chief By Gary Gygax could take place within the wooded wastelands of what was Russia, Alaska, Canada. There have always been legends of giants in those areas. Many multi headed ones and deformed ones at that. 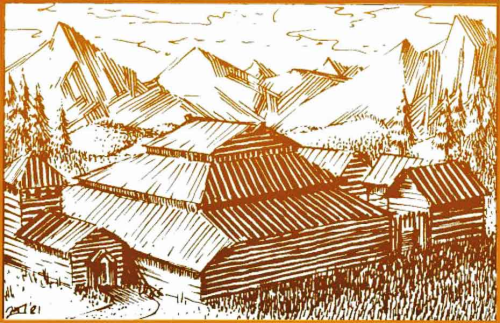 But what does all this mean to the 'Old Solar' system setting? Well it might mean that we'll be seeing the rise of the real power in the form of the frost giants (hrímþursar), & the  fire giants (eldjötnar) both of which were highly alien life forms who ruled their own empires on the edges of the solar system. There is evidence scattered throughout Leigh Brackett's tales of even older civilizations that have come to fill the power vacuum left by the Mi Go departing Pluto & over the centuries others have moved in to take their place. 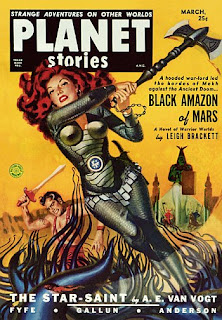 The return of the Ice Worm cult might be signaling the return of some very dangerous entities indeed. Perhaps the colonists out around the edges of Saturn are waiting & watching deep space after all Cykranosh has been a way station to all kinds of Lovecraftian Great Old Ones in the past. Perhaps the ice giants have been supplying their Formorian servants with weird relics & weapons in preparation for the coming war.
Posted by Needles at 10:34 AM