A prince wanders the wastelands of another world facing down monsters, menaces, and evils beyond the pale of man? Sounds like a familiar barbarian poster boy of Sword & Sorcery? Well how about instead of the usual movie barbarian warrior we have heroes, who had to use their courage and brains instead of muscles in the face of a danger. Well your about to hear the story of another barbarian prince from the far off land of Germany and how we met.  Plus much more. 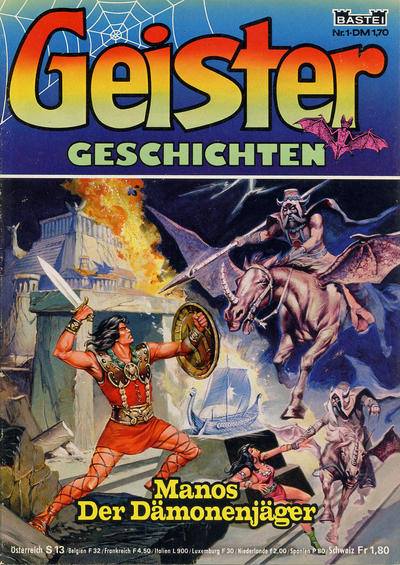 So its about Eighty Five or Six, the year is unimportant but my uncle & my dad are talking in the downstairs garage leaving me in 'the wreck room.' That's what we used to call the gaming, comic,sand table  and all around man cave/study where all  of my uncles war, history, military books were stored. Now that particular day I came across a pile of bagged & boarded European comics. Everyone else was into Marvel's Secret Wars & super heroes were dying like flies in DC's Crisis On Infinite Earths. 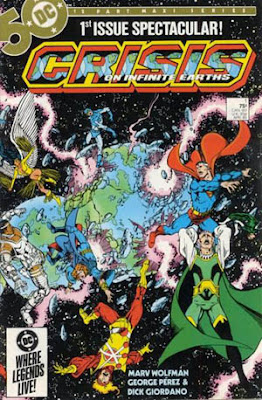 For me it was a really defining time in my young life. I was getting into Swords & Sorcery comic books, paper backs, heavy metal, & mainlining anything Conan related. Especially the Savage Sword of Conan magazines, Robert Howard paperbacks, etc. That's when I discovered the insane & pulpy goodness of a stack of Manos Der Dämonenjäger comic books.
The books concern a wandering barbarian king & they have their own unique brand of sword  & sorcery goodness. For me they were a welcome distraction from the day to day weirdness of Eighties small town hum drum life. The writing was good as my uncle tried to teach us a bit of  German & this series really dovetailed in nicely with the Advanced Dungeons & Dragons Der Ring des Nibelungen WWV 86 campaign we had going at the time. 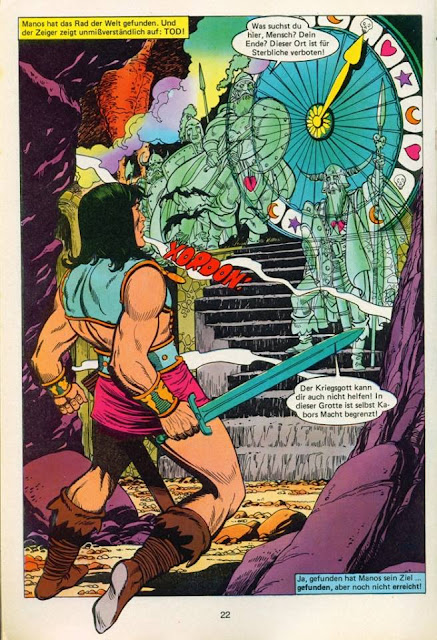 Years later I would look through the Monster Brains site and discover the version of the comic book published in Spain. One of the gentlemen responsible for the character of Manos is Peter Mennigen and if your a German fan of the Phantom that name should be familiar. According to the Phantom Wiki. org;"Peter Mennigen (born 1952) is a German comics writer. He is perhaps most known as the primary writer for the horror comic Gespenster-Geschichten and other work for the German publisher Bastei. In the 1970's and 1980's, Mennigen wrote all Phantom stories produced by Bastei for their line of Phantom comic books; in total over 100 stories"  Now Peter Mennigen has been putting out the back story of his famous barbarian king on the web with a commentary that goes into far more depth;

Manos the Demon Hunter - Part 1
Or: „Sword and Sorcery“ Made in Germany

Perhaps some readers still remembers this „Sword and Sorcery“ series. In the 1980s the comic appeared first in the comic book series „Geister Geschichten“ and later as „Manos der Dämonenjäger“ in his own magazine. In total the Bastei Verlag published 124 adventures of the prehistoric hero. Behind „Conan the Barbarian“ and „Savage Sword of Conan“ by Marvel this is a respectable third place in the ranking of the most long lived comic fantasy heroes.

At first, „Manos der Dämonenjäger" was an ordinary comic series among many others published by the Bastei publishing house resident in Bergisch Gladbach, a small city near Cologne, Germany. But bit by bit the series developed into one of the most ambitious productions of Bastei’s comic department called „Jugendredaktion“ („Youth editorial staff“).

The global „Sword & Sorcery" hype in the 1970s had not been unnoticed by Bastei. In the spring of 1980, Werner Geismar, then editor-in-chief of the „Jugendredaktion“, called me. He informed me about a planned fantasy comic series and roughly outlined it’s content:
In a diffuse past, Manos and his beautiful sister Parda grew up as children of the priest-king Gäon. While one day demons destroyed their city Polis, they both escaped their death by flight.
What followed was the central theme of most fantasy epics: a dangerous journey with a mission. Together with his sister Parda, his uncle Zango and later his love interest, the goddess Alana, Manos traveled during the next years through a lot of countries with the aim of rebuilding somewhere a new Polis.

Based on this plotting, I developed a detailed concept. In the first draft, my protagonists were more like the hobbits of „Lord of the Rings“. Heroes, who had to use their courage and brains instead of muscles in the face of a danger.
Bastei, however, wanted stylistically as well as the story content a hero based on Robert E. Howard's „Conan“. So I rewrote the draft accordingly and also sent an exposé for the first story with to Bastei. After two more minor corrections, the story stood, and Manos’ first adventure could be written as a script by me.

At this time I was pretty busy with writing other comic book series. That is why the editorial team was looking for a co-author for „Manos“, which should relieve me.


At a meeting at Bastei in Bergisch Gladbach with the editor-in-chief Werner Geismar and the editor Ewald Fehlau I was introduced to the today very famous fantasy novel author Wolfgang Hohlbein, who was then earning his first spurs at the Bastei novel department.
We talked a lot about „Manos“ and the course that the stories could take. In terms of content, the stories took place in the haze of the usual „Sword & Sorcery“ themes, such as monsters, demons, wizards, witches and magical artefacts. Preferably textile-lacking beauties should not be missing too.
After the meeting, however, I saw or heard nothing more of Hohlbein. Whether he had lost interest in the comic, or whether his exposés had been rejected by the editors, is beyond my knowledge.
Therefore the writing work as a „Manos“ chronicler was reserved for me alone.
As for the format of the „Manos“-comics, Bastei went at first on the safe side. In order to inspire the readership for the new series, they gave the comic book the title: „Geister Geschichten“ („Ghost Stories“) following the successful „Gespenster Geschichten“ („Spector Stories“) and „Spuk Geschichten“ („Spook Stories“).
The comic book included a 14-page „Manos“-comic story with mostly a contained adventure. This main story was added by two short stories. Apart from an antique background, the additional stories had little to do with fantasy. I delivered these stories with every new „Manos“ exposé too.
Between September 1980 and August 1983, a total number of 89 „Geister Geschichten“ appeared – usually bi-weekly, for some time weekly. Despite the parallels to Conan, I have tried to give the little „Manos“ saga a special stamp, its own identity."
Reading through this commentary the German comic book scene versus the American bullpen style seems almost day and night during the Eighties. 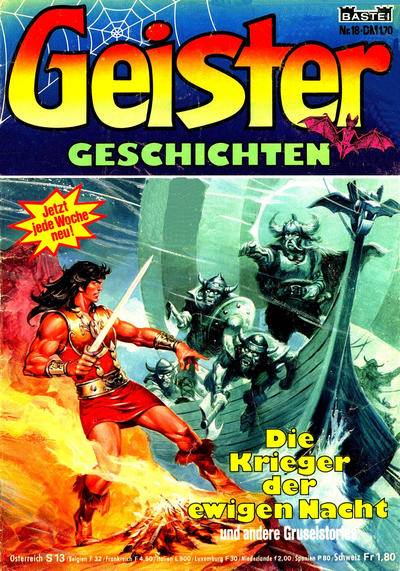 For a young D&D player these comics were gold! They had a bunch of pulpy elements that meshed nicely with the adventures we were doing at the time not to mention the horror elements that came in later issues. There was something very different going on in these comics then the harder edged American Sword & Sorcery of the time. For D&D dungeon masters the patterns of adventures seemed right in line with many of the perils faced by adventurers. These were that the adventurers or heroes always seemed way out ranked by the monsters and circumstances that they found themselves in.These comics had a different feel to them aesthetically then say something like the Avengers or other titles of the time. There was a far more European sensibility to the Sword & Sorcery action. A sense that while the main characters are heroes they're still fragile beings who find themselves in very dangerous circumstances.

In terms of how this works for an OSR campaign, it means that the heroes are the PC pivot points around which the adventure action is drawn. We see this in Shakespeare's plays & many of Robert Howard's Solomon Kane stories. We also see this in some of the RH Conan stories  at some points but Conan is comes through hard adventures as an almost but not quite force of nature. In D&D terms even the higher level PC's will face down monsters, threats, and horrors that far outrank them in terms of sheer power. All of this was done with that over the top Eighties weirdness and style that I love. 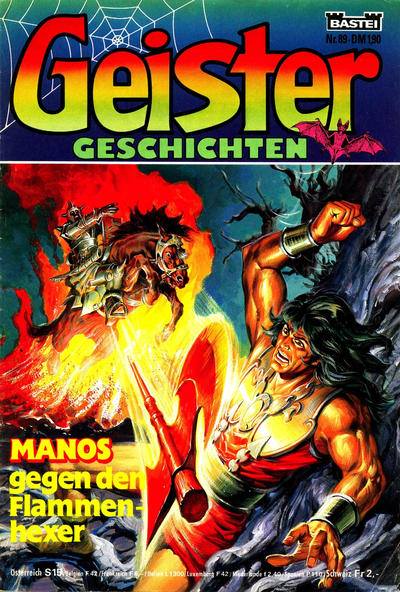 There is an internal mythology to the 'Manos der Dämonenjäger" series that lends itself to the old school feel of Dungeons & Dragons. Everything from the adventure locations, artifacts,characters,and other internal comic book series elements all work. Peter Mennigen was kind enough to supply me with the background story from this time.For that alone I'm very grateful but this is only part I of a three part series.
Posted by Needles at 9:14 AM