Mark Taormino's latest adventure Kickstarter broke earlier this afternoon. He wants to add new artwork & pieces to his existing modules. No this isn't a few coats of paint, some new artwork here & there this is a solid revamp.

So tonight I've been thinking does one use modern OSR game adventures with old school campaigns or campaign designed settings. All of this centers around Mark Taormino's latest Dark Wizard Games Kickstarter which dropped earlier today.


Many of Mark's adventures center around adventures with some pretty wild, weird, gonzo anachronistic adventure set pieces. From space craft,death roller coasters, fun house dungeons with modernistic elements, & many more. You can see exactly the sort of weirdness I'm talking about in Mark's walk through of the Secret Machines of the Star Spawn. So how the hell does a dungeon master cope with some of the modernistic touches in many of the Dark Wizards titles? Surely there can't be a classic old school Sword & Sorcery solution that can not only build upon some of the guiding principals of these modules but actually incorporate them.

If we begin to look into the actual adventure plot for Secret Machines of the Star Spawn several small plot points jump straight out, "Locals have been hearing whispers of strange happenings around the Ancient Volcano. Rumors over the last several years of an unspeakable evil that has risen up inside. An evil that “fell from the stars.” There is something wicked and devilish going on inside. Highwaymen report of strange creatures, mechanical monsters, horrible beasts and “little green men” that are roaming the land. You and your stalwart adventurers have decided to take on the challenge of plundering the mountain for the treasure within!" 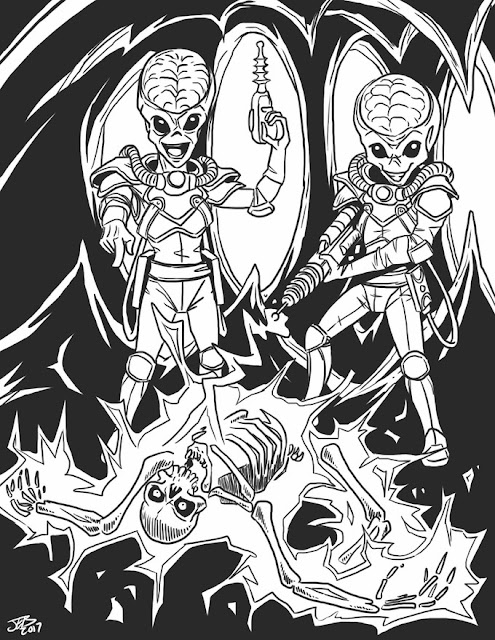 Star Spawn uses many of the popular pop culture & sci fi pulp tropes to great advantage within its setting, it throws PC's into the deep end of the adventure pool with sci fi references, traps, tricks, etc galore. The Secret Machines of the Star Spawn exists in a sort of campaign vacuum so that the dungeon master can slot it into their own campaign. That's fine and it works really well but what if there was a back ground campaign setting & a possible drag & drop point for adventurers? Well there is in the third series module Villains of the Undercity, we get the small coastal city of Los Farport. This is a sort of campaign setting parody, homage to several well known  old school & TSR campaign cities. But it manages to create its own flavor of mayhem with its old school style plot;"The locals insist people are being abducted in the night and taken into the bowels of the rumored “Undercity Dungeon” below. A lone survivor managed to escape and give some information before dying in your arms: “Secret door... Tavern of the Wiley Wench... Ugh!” You and your brave team of adventurers have decided to investigate these rumors, plunder the dungeon and destroy the dreaded “Villains of the Undercity!” ...right after you loot his still warm body, of course."  Well what if this world is a throw back to another earlier age.

Taking my cues from a classic science fiction novel by Clifford Simak called the Goblin Reservation. The book is a blend of science fiction and fantasy, it features a ghost, leprechauns, trolls, banshees, a dragon, a cybernetic sabertooth tiger, a Neanderthal, Shakespeare, aliens who get around on wheels, time travel, and stranger things. It was nominated for a Hugo Award in 1969. But this was a bit to close to Tolkein's influence for me. But man do I love that '77 cover artwork! I have this edition lovingly bagged up because I love the artwork so much. 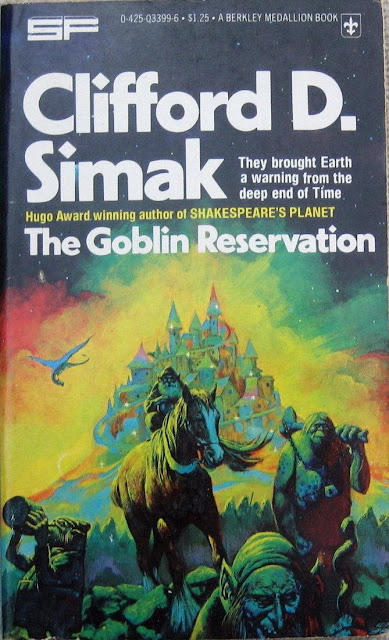 So I began to dig into a few earlier C.L. Moore stories along with Leigh Brackett's novellas. I began to look into the possibility of a small Exo planet out beyond Pluto caught in the Boreas Winds. This world was once a Hyperborean empire out post world populated by near humans with a few twists on the traditional fantasy & Dungeons & Dragons tropes. This means that there is more to this then simply placing an exo world outside the normal bounds of the solar system and populating it with traditional D&D style races and monsters. These races are actually human based hybrids genetically engineered eons ago by dark Hyperborean masters for working under weird conditions. But there are far darker undertones here especially if Clark Ashton Smith & HP Lovecraft's monster  cosmicism is followed.
It is absolutely necessary, for the peace and safety of mankind, that some of earth's dark, dead corners and unplumbed depths be let alone; lest sleeping abnormalities wake to resurgent life, and blasphemously surviving nightmares squirm and splash out of their black lairs to newer and wider conquests.
Read more at: https://www.brainyquote.com/quotes/authors/h/h_p_lovecraft.html 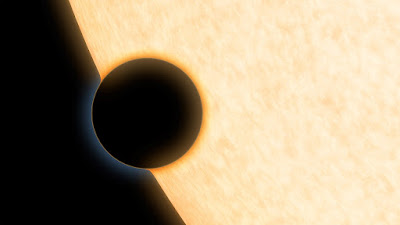 "It is absolutely necessary, for the peace and safety of mankind, that some of earth's dark, dead corners and unplumbed depths be let alone; lest sleeping abnormalities wake to resurgent life, and blasphemously surviving nightmares squirm and splash out of their black lairs to newer and wider conquests."
HP  Lovecraft

Here adventurers actions aren't irreverent instead they're absolutely necessary for the survival of the communities, kingdoms, and city states existing on the edges of  the solar system. "In Lovecraft's work, human beings are often subject to powerful beings and other cosmic forces, but these forces are not so much malevolent as they are indifferent toward humanity" In other words the world needs the PC's to stand between the threats from outside because there are far more malevolent forces waiting beyond the bubble of reality.  Time and again we see monsters, funny house situations, and more yet we're not seeing the whole picture of  events. Monsters are merely one more pray animal to far more dangerous forces lurking outside of this cheese cloth reality.  This isn't Thundarr the Barbarian so much as its the dungeon or adventure ecology of a Sword & Sorcery world with sort of trappings of high fantasy. But this is not. 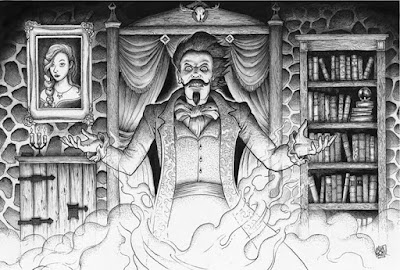 "The most merciful thing in the world, I think, is the inability of the human mind to correlate all its contents. We live on a placid island of ignorance in the midst of black seas of infinity, and it was not meant that we should voyage far. The sciences, each straining in its own direction, have hitherto harmed us little; but some day the piecing together of dissociated knowledge will open up such terrifying vistas of reality, and of our frightful position therein, that we shall either go mad from the revelation or flee from the deadly light into the peace and safety of a new dark age.
Theosophists have guessed at the awesome grandeur of the cosmic cycle wherein our world and human race form transient incidents. They have hinted at strange survivals in terms which would freeze the blood if not masked by a bland optimism. But it is not from them that there came the single glimpse of forbidden aeons which chills me when I think of it and maddens me when I dream of it. That glimpse, like all dread glimpses of truth, flashed out from an accidental piecing together of separated things—in this case an old newspaper item and the notes of a dead professor. I hope that no one else will accomplish this piecing out; certainly, if I live, I shall never knowingly supply a link in so hideous a chain. I think that the professor, too, intended to keep silent regarding the part he knew, and that he would have destroyed his notes had not sudden death seized him."
HP Lovecraft The Call of Cthulhu

This means that Elves, Dwarves, etc. are merely magically charged 'happy meals' waiting for any number of Lovecraftian entities to come and feed on them. These beings are more then merely alien to mankind their a set of prey animal waiting to be snatched away by alien and extra terrestrial races of incredible power. 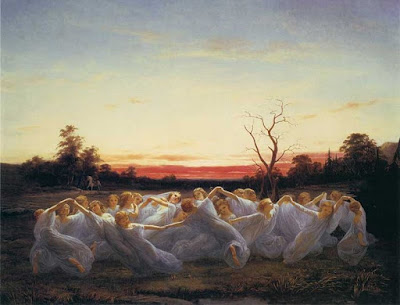 We see snatches of this in Clark Ashton Smith's Zothique stories especially in Xeethra by  Clark Ashton Smith
"Subtle and manifold are the nets of the Demon, who followeth his chosen from birth to death and from death to death, throughout many lives.
—The Testaments of Carnamagos"
The players should never be made to be suitable for an adventure or module. The module or adventure should be modified out to the players needs as necessary. Here the changes to the modules or adventures are subtle from the standard D&D or OSR modules here its all in the background or side story elements to convey that something is more then slightly 'off'' adventure motifs.
In the end its not about just killing monsters and taking their stuff, its also about staving off the darkness for a bit longer and having your PC be the larger then life heroes they were meant to be.