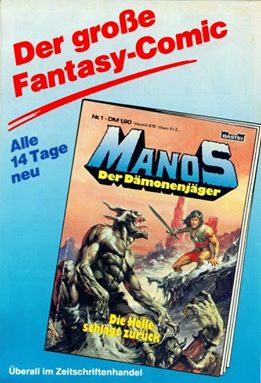 As I covered in my first part of this series of articles, the Eighties were the second golden age of Sword & Sorcery adventure fiction. Coming in hot to usher in this age of decadence and magick was the  Conan The Barbarian film released 1982 starring Arnold Schwarzenegger. I can't tell you the impact this movie had on people across the world. For small town Eric it was a huge deal & it colored my views for decades to come. This was a defining film for a generation in a way & devoured each & everything Sword & Sorcery related. I snuck into a rated 'R' showing with friends way back when.


Savage Sword of Conan magazine was going strong but it wasn't enough for a restless slightly hyperactive  kid with a passion for Dungeons & Dragons, Sword & Sorcery comic books, & that more edgy European stuff. My adoptive uncle was there to feed the flames of youth.  I got more then my share of a wider audience of  comic books from aboard. A year after Conan hit the theaters,another thinking man's  barbarian prince had hit the comic book stands in Germany. Europe had always had a different take on the Sword & Sorcery market and in post war Germany the thirst for literature of the escapist variety was very high. Manos The Demon Slayer was the perfect vehicle for it. Whist I worked on my German to read the issues. Half a world away in Germany veteran comic book writer Peter Mennigen was churning out stories of foul sorcery, deeds of daring, and a thinking barbarian warrior who used his brains and courage far more often then he used his sword arm. 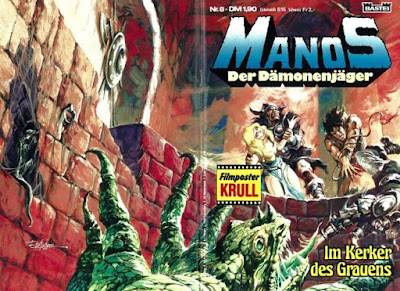 These were a different breed of comic book hero carving their way across the news stands and specialty comic book shops of the Eighties. I learned quick from 'Manos der Dämonenjäger' how the pacing of an adventure was put together, where and when to apply over the top monster encounters, how to develop quick sweeping back stories for PC's, & most of all how to wrap a Sword & Sorcery campaign in the European style. Meanwhile back in Germany Peter Mennigen was creating more danger and horror for our heroes. But I'll let him tell it.

Manos the Demon Hunters - Part 2
Or: Changing times, new beginning and the end

In August 1983, Bastei took the next step: „Manos“ got its own magazine. The target group of readers was no longer the „usual“ Bastei reader. Rather, they tried to get a new readership among the fantasy fans who had not shown any interest in the series so far.
Instead of „Geister Geschichten“ appeared now in great letters the title „Manos der Dämonenjäger“ („Manos the demon hunter“) on the front cover. Each issue was given an impressive wrap-around cover. They were great fantasy works of art, painted by Ertugrul Edirne and Ugurcan Yüce. Both artists were already responsible for the covers of the „Geister Geschichten“, which looked - because of to the small layout - relatively unspectacular.
The „Manos“ comic was expanded from 14 to 22 pages. The two additional stories were deleted. The comic was supplemented by one pagern who, in pure text form with a great illustration, illuminated the mythology of the „Manos age“. The middle section of the comic book contained a poster of a great fantasy artist such as Vincente Segrelles, Esteban Maroto, Rowena, Boris Vallejo or Luis Royo.

For the new magazine Werner Geismar worked out the plots of the first five „Manos“ stories. I wrote them as detailed exposés and after getting the okay from the editors I wrote them as scripts. All following stories I wrote completely on my own again.
The stories in the old series „Geister Geschichten“ had mostly been completed in every issue. „Manos“ now had story arcs extended over several issues. Obviously the life of the protagonist was subject to many changes, which often led him to gloomy lands.
In one storyline, Manos’ sister Parda married a demon ruler. If Manos had expected to get the benevolence of his sister when he killed her demonic husband, he had miscalculated. Parda refused him any help and developed instead to his deadly enemy. A happy ending may look different.

Towards the middle of the eighties, the gloom of the worldwide fantasy boom slowed down. What was also reflected in the decreasing sales of the „Manos“ comic book. At some point, the series does not pay off anymore and was canceled after 35 issues in December 1984. "

The Eighties were a very weird transitional time period for comic books. There the numerous American, European, & Italian Sword & Sorcery knockoff films ( which I happen to love)  not to mention the shake ups happening in original Dungeons & Dragons, B/X D&D, and Advanced Dungeons & Dragons first edition 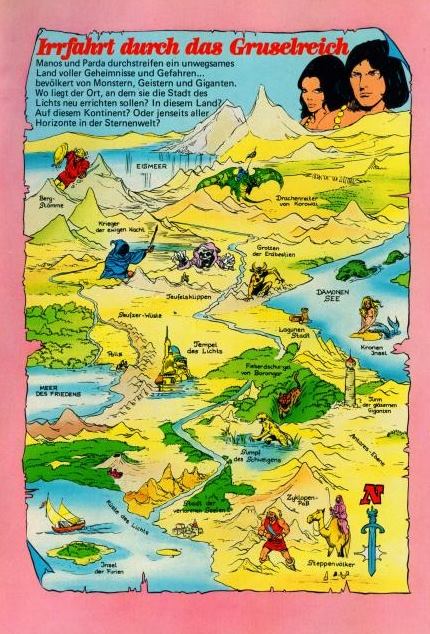 These comic books had plots & subplots which were a bit more involved and had far more back story then some of the mainstream Marvel ones of the time but DC was starting to go that same style of route. The Manos the demon hunter issues were consistent & much less adult then the issues of Heavy Metal & The Savage Sword of Conan making them easy fodder for the younger players in my Uncle's game to devour. We played through our Der Ring des Nibelungen WWV 86 cycle but these comics seemed to compliment the action. Plus we were learning a different language. It wasn't until years later that I finally got into the same comic book stories  with those outrageously gonzo wrap around covers! The wrap around cover  pages are a thing of lurid pulpastic things of beauty! Simply bask in them. 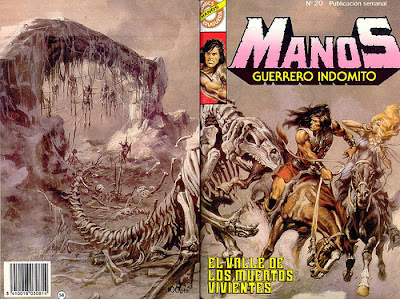 There was a lot that I learned from reading these these comics from the mythology of the past catching up with the dreams of the present to the fact that familial relations between PC & NPC's are a thing to be exploited to the fullest, these comics also had a driving supernatural almost what could be considered a Lovecraftian edge to them. The plots revolved and changed, adventures were dynamic and pulpy, and the characters were well rounded to a certain Sword & Sorcery degree much of this was due to Peter Mennigen's writing. Next time we dive more into the world of the demon slayer. Stay tuned! 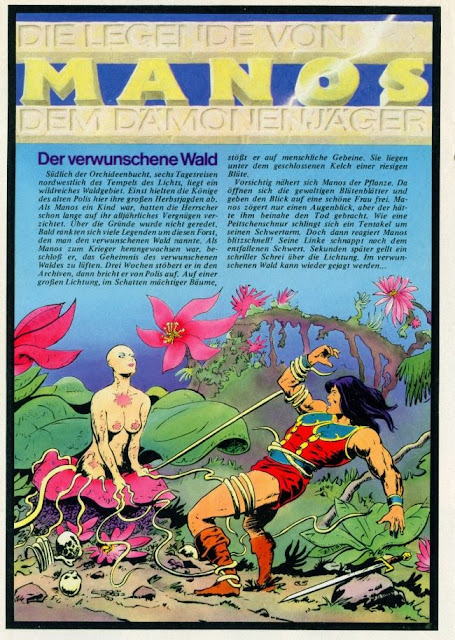