So let's pick it right at part three of this series of articles about the second Golden age of Sword & Sorcery comic books especially "Manos der Dämonenjäger" or  in English as "Manos the Demon Hunters". It is still remembered as one of the most enduring comic book Sword & Sorcery comic book titles today. It has a small but devoted international fan base and this largely due to the solid writing of Peter Mennigen. 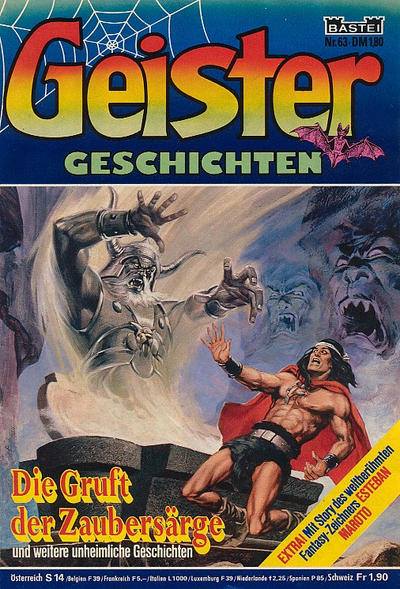 Ghosts Stories #63
14-Page-Manos Comic: "in the ambush of the demons".
Artwork: Esteban Maroto.


Mr. Mennigen is a veteran writer with many years of titles under his belt including, "Ghost Stories", "Haunted Stories", "Conny", "Biggi", "Vanessa", "Felix", "Lasso", "Phantom", " Axel F. " As well as many Bastei publishing house titles . He is stirring the Steampunk world  with Ingo Römling on the Steampunk series " Malcolm Max " which has a very nice spin on the Mystery Gerne. If you get the time I highly suggest checking it out.
Now let's dive right into the world of "Manos the Demon Hunters" because the titles setting is one of the things that still to this day sticks with me. This isn't your average Sword & Sorcery style adventure world. The supernatural is very active, dangerous, & quite horrid with humanity at a clear disadvantage. 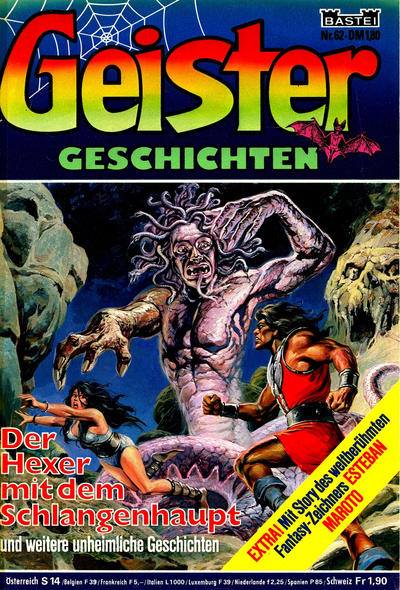 This is a world that clearly not only needs the main character's deeds but those of his family this is where some of the central plot of the series lay. The hero's struggles are personal, clearly defined and quite devastating to the core characters of the book. Wizards & villains are powers going about the machinations of the structure of the world. This type of plot structure is firmly grounded in the operatic nature of the books. This was something quite extraordinary for the time. Remember this is the Eighties when Marvel & DC were trotting out titles like Secret Wars & Sword of Conan basically had Conan wandering across the face of his world. Manos had family, plot, and structure all within the bounds of his title. There was a consistency and accuracy to the world. The wizards were dangerous and quite done in the classic mold, the demons vile monsters of the darkness, and the evil was done in a way that twists things to the overall writing. But things were starting to go in a different route in 1983. This was reflected in Peter Mennigen's writing & the artistic tone of the Manos series. He talks about it here : 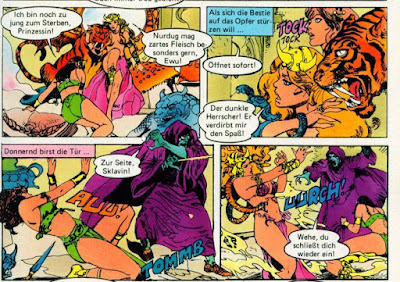 Visually, „Manos“ did not have to hide. His adventures in the series „Geister Geschichten“ and „Manos der Dämonenjäger“ were drawn by the Who is Who of the Spanish Top artists:


Esteban Maroto
Before the publshing of „Geister Geschichten“, during the conceptual phase of the „Manos“ comic, the question arose of a suitable artist. When the editor-in-chief Werner Geismar asked me if I had a certain artist for the artwork in mind, I reached for the stars and named none other than one of the greatest fantasy artists ever: „Esteban Maroto“.

In response, I expected something like: Wonderful, but impossible.
But he left my suggestion uncommented. About two years later he called me one day and said, „We got him.“
Esteban Maroto drew three of my Manos scripts, which appeared in the „Geister Geschichten“ #61, #62, and #63.


Carlos Torrente
In the 1980s, the Spanish artist drew numerous comics for various Bastei series. Internationally, his work has been published in comics magazines such as „As“ or „Metal Hurlant“. Later, he concentrated more and more on illustrations for the press.


Luis Martinez Roca
Born in Barcelona in 1940, he was one of the first Spaniards to work for the American publishing house of James Warren, where he draw „Vampirella“. He died in 1998 in his hometown of Barcelona.


José Maria Bellalta Suárez
Suárez was born in 1941 in Barcelona. In the 1970s he founded the „Spanish Artist Studio“. For Bastei, he also drew the series „Arsat der Magier von Venedig“ („Arsat the Magician of Venice“) alongside of „Manos“.


DeMetrio Gómez Sánchez
Born in 1944 in Pilar de la Horadada, the Spaniard became an artist of Western-, Horror- and Romantic comics. In the USA he worked for the publishing house „Charlton Comics“. For Bastei he drew many „Gespenster Geschichten“ and „Manos“.


Ertugrul Edirne
Edirne was born in Istanbul in 1954 and lives in Cologne (Germany) since 1981. On behalf of the Bastei publishing house, he created numerous cover pictures for series such as

„Bessy“, „Lasso“, „Silberpfeil“, „Manos“ and more. He later worked as an illustrator for the Heyne -, the Ravensburger - and the Norbert Hethke publishing houses.


Ugurcan Yüce
The artist, who was born in Istanbul in 1947 and became famous for his cover art. After graduating on an art school in painting and sculpture, Yüce moved to Germany in 1980, where he produced numerous cover pictures for the Bastei publishing house. Among other comic series he illustrated covers for „Geister Geschichten“ and „Manos der Dämonenjäger“. Later, he designed various covers for computer games. Ugurcan Yüce died in February 2015 in Stuttgart, Germany.

These artists helped to shape the look,visual style, & the feel of the world of 'Manos the Demon Hunters'. In many ways the artists helped to define on the whole not only the setting but the entire nature of Peter Mennigen's writing.


These artistic changes helped to grab young audience members such as myself & those glorious wrap around covers helped to launch the book over the top into another category. The covers by Esteban Maroto were incredible with  colors that  were lush, lurid, and lusty with Sword & Sorcery goodness.  They remind me of many of the best of Dungeon Crawl Classic's best covers on some of their game adventures. 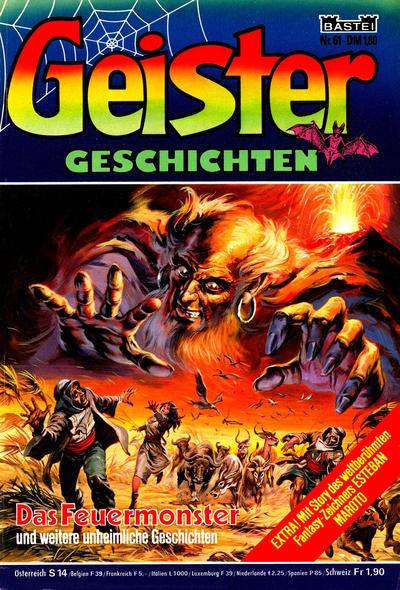 "Manos The Demon Hunters" was a product of both the times & its author's imagination that had the operatic quality to it that my adopted uncle was looking for. It wasn't quite as rough & ready as Heavy Metal was for the time so it was safer for us kids to read. But it reflected what was happening at the table top during this time as we braved many of the dangers of the 'gods' from  Der Ring des Nibelungen WWV 86 cycle of adventures. 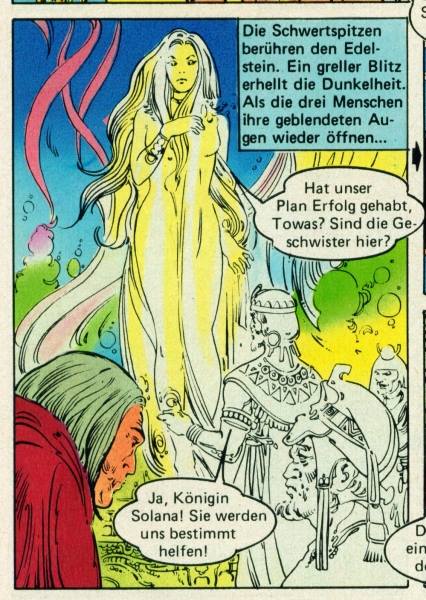 
Overall there's an almost old school  campaign setting consistency to the world of  "Manos The Demon Hunters" that echoes in its storytelling something of the time of Eighties Sword & Sorcery pulpy goodness. There was hardly an issue in the run that disappointed me but the times were changing & so were the tastes in Sword & Sorcery fantasy. These were reflected in many later issues and as we shall see they echoed at the Dungeons & Dragons table top as well.