"I felt like lying down by the side of the trail and remembering it all. The woods do that to you, they always look familiar, long lost, like the face of a long-dead relative, like an old dream, like a piece of forgotten song drifting across the water, most of all like golden eternities of past childhood or past manhood and all the living and the dying and the heartbreak that went on a million years ago and the clouds as they pass overhead seem to testify (by their own lonesome familiarity) to this feeling. Ecstasy, even, I felt, with flashes of sudden remembrance, and feeling sweaty and drowsy I felt like sleeping and dreaming in the grass" 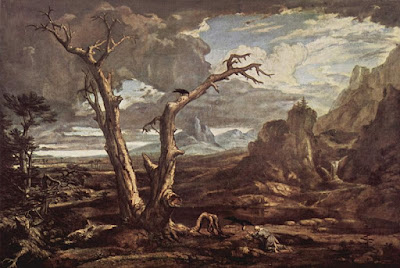 Elijah in the Desert, 1818, Museum of Fine Arts, Boston

Introduction
Down in the darkest parts of the lower viberational planes of dream locked between the Burroughs/Bakshi realms are the wilderness of consciousness. These are lands of incredible beauty & absolute horror. Here the possible futures of mankind & the absolute pasts of peoples dreams are woven together to form the patch work landscape of a world of deep dreamings. Here creatures of dream feed on the magick of mankind & adventurers who brave this place are in constant danger. 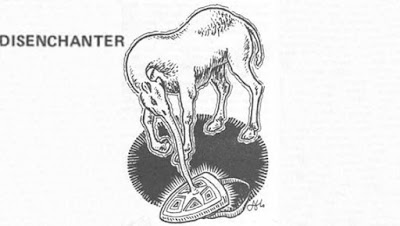 This patch work mini plane of dreams & peusdo history touch a variety of planes making it the perfect but dangerous trail world through the subconscious. Here many wizards come to set up a temporary abode to observe the ever change chaos of the dreams of trillions of beings throughout the planes. The ever changing landscape can drive men insane as bits of this reality change with each & every day. Dream cancer is a problem as the chaos of the place eats at order brought into it. 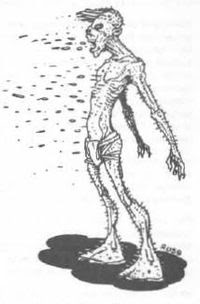 Flora dedicated to feeding on the semi conscious thoughts of beings thrive here as the weird pesudo thought forms & dreams drip through the cracks of dimensions. A billion thoughts can sustain the plane for days on ends as the skies alight with the crashing of electrical phenomenon caused by the dying of dreams.This is a place where the forces of chaos are the rule & norm. The power of the mind is king & there are peoples of incredible skill & passion who live here. They are insane by conventional standards but thrive here in the thought  shadows of man. 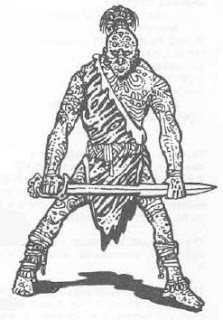 Mankind is like dogs, not gods — as long as you don't get mad they'll bite you — but stay mad and you'll never be bitten. Dogs don't respect humility and sorrow.

Some of the Dharma (1997
Jack Kerouac
The Quallan barrens are a place of stable instability where dwell the insane tribes of Qullan who are masters of this part of the world. They breed in the hills & communicate in the signs of chaos. Their ever sharp blades are able to cut through most creatures but they will occasionally work with a wizard totally dedicated to Chaos. They only respect strength but their insanity twists & turns them as it will & they will eat anyone should the mood take them.

1d10 Encounters Within The