If you were playing expert Dungeons and Dragons in Eighty Three then you got a chance to play in one of the second sword and sorcery style adventures that came from the pen of David "Zeb" Cook. X4 Master of the Desert Nomads puts your party center stage on a daring recon mission of dangerous and deadly proportions to find the 'master'. 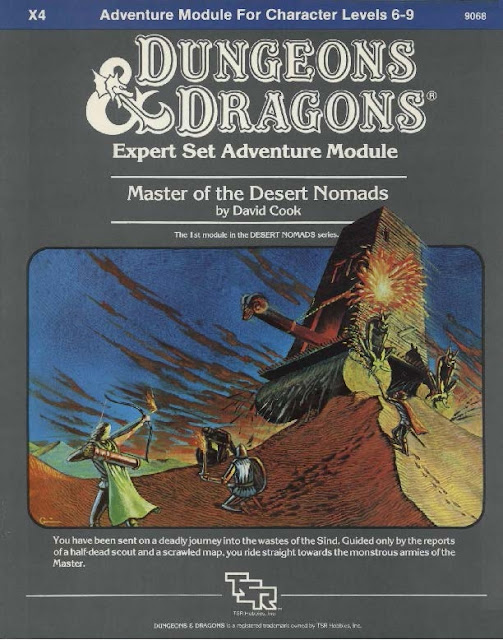 Everything seems to start off with a war and the PC's are caught right in the middle of the action in the Sind desert.
"To arms! To arms! The battle lines are drawn as desert men and inhuman tribes wait poised to strike on the fertile and rich lands of the east. The call has gone out through the civilized lands. The armies have been raised to match the invading foes from the west. Nobles and peasants have joined swords to greet the foes.

But Fate or Chance has decreed another role for a small few. No glorious banners will wave on their march. No squadrons of knights will charge at their word. Instead, they will fight the war through stealth, secrecy, and cunning. The risks they will take are great, but the fates of both armies lie with them.

It begins one night for your party far from the fighting. Suddenly you are entrusted with the most dangerous missions of the war. Can you cross the Sind Desert, occupied now by enemy armies, to find the Great Pass? Can you find the one known only as The Master? What will you do if your do find him?" 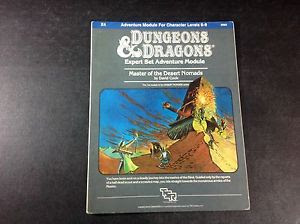 Here's one of the classics of the expert set of Dungeons and Dragons adventures,a wilderness crawl through one of the more deadly regions to appear in  OD&D. Master of the Desert Nomads puts the PC's front and center on the border between civilization and desert wasteland in a Conansque style adventure using a loose and classic sword & sorcery  comic book frame work to gather the PC's as part and parcel of a military recon into the deep end of a desert wastes to find the Master. This is another of David Cook's dips into the sword and sorcery deep in this adventure. 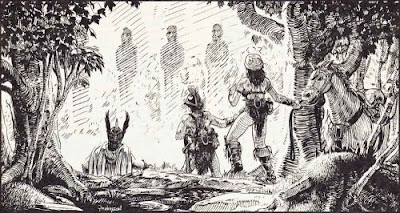 This module has all of the elements of  the classic wilderness crawl told within the frame work of a series of adventure encounters that mold themselves to the party's wanderings. The village on the border of the Republic of Darokin there is a priest  looking for scouts to seek out the Master a mysterious figure who is uniting the various tribes of humans and humanoids in the Sind desert. The Republic's army forces have already moved out and the PC's are left behind to fill in on this dangerous mission.
There are really three reasons to use Master of the Desert Nomads for a retroclone game - 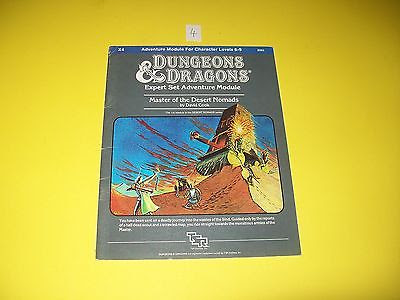 The module is very well done for its time and presents several encounters which might be right at home within a Michael Moorcock novel or as a part a 70's sword and sorcery novel from a drugstore spinner rack. Wiki has a good break down;"In the adventure that follows, the adventurers must tackle a series of wilderness encounters, including journeying up a sluggish river to its source, passing through a dismal salt marsh, crossing an inhospitable desert, and searching for a pass through the high and forbidding mountain chain on the far side of the desert. If successful, the adventure ends at an abbey situated on a mountain spur above the alpine meadows"
The Astonishing Swordsmen and Sorcerers of Hyperborea rpg can run Master of the Desert Nomads quite easily and there are several desert locations within the game that can easily be used as a stand in for the Sind desert. Because the set up is a classic sword & sorcery adventure the X series of modules could be used to frame work around the Ghost Ship of the Desert Dunes as a lost world style mini campaign.
Within a pseudo historical setting X4 Master of The Desert Nomads could be used in an alternative dark fantasy Egypt or North African style adventure set around the Fourteenth or Fifteenth century. The dungeon master might want to draw from the Robert Howard well of dark fantasy literature with Solomon Kane and “The Fire of Asshurbanipal". This adventure will also work on the Chinese Gobi desert style Silk Road setting  which pulls from the Oriental and Middle Eastern mythological traditions. 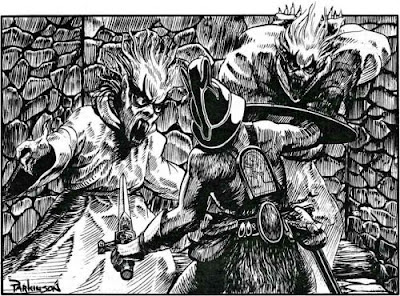 X4 remains a very different feeling adventure with its encounters wrapped around the centeral wheel house of  dark fantasy encounters, odd supernatural encounters, dangerous pieces of old school sword and sorcery action. This was one of the adventures that I've run over and over again with PC's coming face to face with weird monsters and becoming hooked on the desert series. This is one of the stronger modules for Expert edition D&D and seems to hook its players early and the encounters are keyed for the mid range party of adventurers.X4 Master Of The Desert Nomads remains one of the classics for a reason and in my humble opinion X4 remains very vital and is an easily to access adventure to draw a campaign up very quickly and drop the party into the deep end. 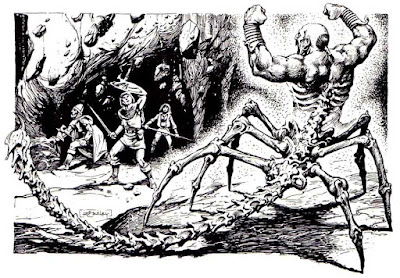