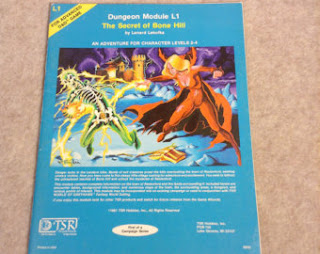 Well, I wrote the reviews and background of U series of Advanced Dungeons and Dragons First Edition adventures but I almost left off L1 The Secret of Bone Hill by  Lenard Lakofka for PC's level two to four.  The cover blurb is classic Eighties TSR;
"Danger lurks in the Lendore Isles. Bands of evil creatures prowl the hills overlooking the town of Restenford, seeking unwary victims. Now you have come to this sleepy little village looking for adventure and excitement. You seek to fathom the unexplored reaches of Bone Hill and unlock the mysteries of Restenford."

Here the PC's adventure in and around the fishing port of Restenford and the sandbox nature of L1 comes out very quickly. The mini campaign setting settles itself right around the Lenore Isles and is more of a mini sandbox dungeon then anything else.   Restenford a small town that has secrets and many of them are deadly. This adventure was a revelation to me as a dungeon master perhaps more so then Keep on The Border Lands because of the fact that you've got an entire community with NPC's, small back histories, and not one or two small dungeon locations.  But  several locations  with a main bit of dungeon crawling at the adventure location itself.
I knew  Len Lakofka's name in wargaming circles for years, the man knows his stuff and then some. The Secret of Bone Hill was an adventure location from his own home campaign which later on became part of his own Lenore Isles campaign it was run for the Nystul family from approximately 1978-1985.
Bone Hill is a wholly realized community in the sense that its a sort of AD&D Lovecraftian Peyton Place. There are secrets within the confines of the module's location, its peoples, and some really strange background elements. Everyone within the module has stat blocks including guards, innkeepers, cooks, etc. This alone makes it a fun walks through for the DM but there's more to it.
There's a certain dungeon or adventure location ecology to the place the bug bears hold Bone Hill during the day and then the undead come out to play. There's also a weird sense that something very weird and tragic happened here ages ago and the party is coming in late on the events. There's a weird horror to it that echos some of the eeriness of Sinister Secret to Salt Marsh. Its also low level and very friendly for dungeon masters who want to introduce the environs of Restenford.
So what does all of this have to do with Astonishing Swordsmen and Sorcerers of Hyperborea and the previous articles on adapting the U series? Quite a bit actually, there is as I a sense that the inhabitants of Restenford are not the original settlers of the place. There's a weird Lovecraftian style of history to the place born out of the extensive rumors table and subtle background hints in some of the dungeons and adventure locations  in the adventure.  The Restenford project has a vast amount of resources for the DM who wants to adapt this adventure as the town that described in the Sinister Secret of Salt Marsh. One of the things I've done running The Secret of Bone Hill is to strengthen the ties between the Deep Ones and the wizard of the tower. This gives a far more eerie take on the events of U3 and takes the PC's deeper into the mysteries that L1 presents. This means that the succession of wizards, the corrupt king of the castle and more all have back ties to the founding of the castle.
Then there are humanoid races and tribes in the area as well as the all pervading sense of evil to the castle and its surroundings. The magick and corruption of Bone Hill speaks of chaos and weird horror from foul sorcery heavily influencing the location. Men and elves have recently occupied the location but the locals don't even seem to be aware of why? Then there's the spectator which is only summoned to guard very valuable treasures for over one hundred and one years. Who in the succession of wizards and undead has summoned such a horror and why? This would be a fourteenth level wizard or highe, this is not a light weight spell caster. This is a gray wizard of considerable power and occult knowledge.
There are other adventure events going on here such as why humanoid tribes and wolves are stacked up on one another and how do they exist? My solution to this was the spontaneous dungeon life form generation first created by James Mishler  This is not only happening but replenishing the ranks of the local gnolls, orcs, and other humanoids while the undead of Bone Hill own the night and are mostly unchallenged.

This gives the adventure location of Bone Hill some horrific background elements and history but it also creates a perfect breeding ground for more adventures in the hills of the place amid the lost ruins and weird locations. There are several smaller dungeons in town that hint at not only dangers below the town but a sense of corruption that creeps just below the radar of the town itself. This includes a new monster called the 'spectator' a beholder kin who has several interesting features that fits more into the realm  of the film 'Big Trouble In Little China' then AD&D.  There are several monsters from the OSR or AS&SH that can easily take the place of the spectator if necessary. 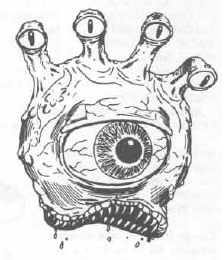 What the spectator really points out is the presence of some very powerful black wizards or neutrally aligned wizards in L1. A trend that would continue with the L series as we shall see soon in other entries. Bone Hill and its other adventure locations hint at some very dark history in its background. This fact can easily be used to re enforce the dark connections between the the sahuagin or deep one communities off the coasts of the Lenore isles. This face can easily be exploited to give a game of Lamentations of the Flame Princess a much more grounded and dark fantastic nautical feel. I myself did this by placing the Salt Marsh and its setting materials into a twisted version of Earth using the coast of Spain as the stand in. The 2001 Spanish horror film Dagon takes place in "Imboca", a Spanish adaption of "Innsmouth". 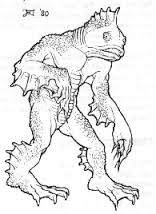 But I digress from my original take on The Secret of Bone Hill, its subject matter and very nature
Puts the entire Secret of Bone Hill and the 'U' series into the AS&SH pulpy Weird Tales wheel house but  the locations of Restenford and the Lenore isles as a whole can be ported directly over to Hyperborea without a single tear drop. This option enables a dungeon master to tie all of the loose ends of the 'U' series together in a nice single wrapped up campaign ready to play. Now I've heard several folks ask me about higher level adventures and actually Mr. Lenard Lakofka  with the addition of the L5 series which takes place entirely within the Lenore Isles themselves. This is a free addition that can not only continue the adventures but to help fill in some of the missing bits and pieces of The Secret of Bone Hill. As a mini sand box Bone Hill is not only a flexible frame work but can give you as the DM everything you need to continue your adventures within a nasty, dangerous and dark fantastic frame work of adventure. More coming up soon. 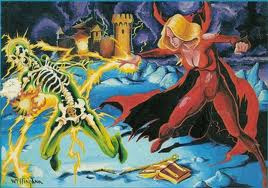