Swamp creatures! They surround you now as you move slowly through the gurgling muck. How will you reach Quagmire now? Each day, the hungry sea swallows more of the ancient port city. A fierce fever ravages its people, and now - these foul monsters! Their beady eyes glimmer from deep within the tangled vines.
Are these the creatures that have blockaded the city, turning away the ships that are the city's lifeline? Are these the scum that are starving the people of Quagmire, threatening an entire race with extinction? These creeps? Let's clean this jungle out!


You Can Grab It Here 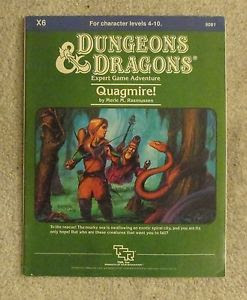 Lately with the retro reviews I've been indulging quite a few of my friends and I decided to return to one of my favorite mid level Dungeons and Dragons Expert modules. X6: "Quagmire!" (1984), by Merle M. Rasmussen is a pulpy and dark roving look into the heart of a sinking bug infested hell hole of a swamp that features some very in depth exploration of some of the lowest recesses of Mystara. "The characters must travel through a monster-infested swamp to get to the city, which is being slowly swallowed into the sea.[2] Quagmire is a whelk-shaped "spiral city", built by a dead race in the Serpent Peninsula", yeah at least that's the break down according to Wiki.  What X6 actually does in solid terms is to create a very dangerous and deadly intense wilderness crawl with a viable ecosystem, rules on disease, complete environment crawl through on every level. That's exactly what X6 does in spades. This is a damn fine module to use and download. 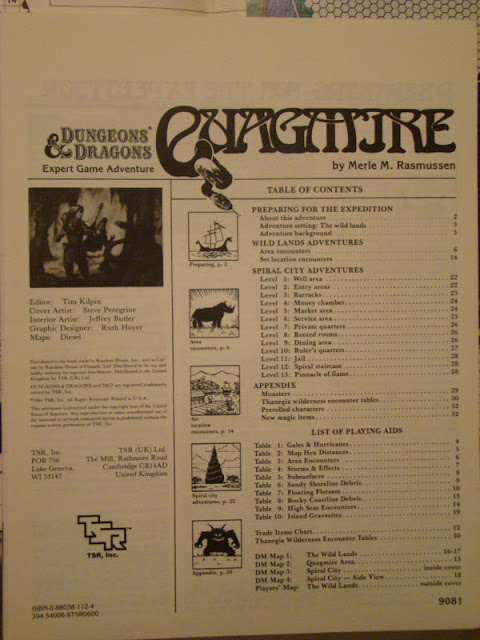 The real secret to X6 Quagmire! is the fact that half of the adventure is taken up by wilderness crawling and the second half is the shell city. The adventure also includes new magic items and a special, expanded monsters section many of which are available in a wide variety of retroclone systems including Astonishing Swordsmen and Sorcerers of Hyperborea. I've used X6 Quagmire to introduce the Picts from AS&SH more then a few times now using Robert Howard's Serpent Men and Lovecraft's Lizard men using geological and ecological slow wars against one another. Quagmire presents a perfect city to introduce shadow half serpent men into the mix as NPC allies and antagonists. Realms of Crawling Chaos from Goblinoid Games works quite well to back this sort of an adventure up with both Lovecraftian PC races and optional antagonists. Deep One Hybrid fighters and thieves can help with many of the incredibly intensive underwater encounters and monsters. 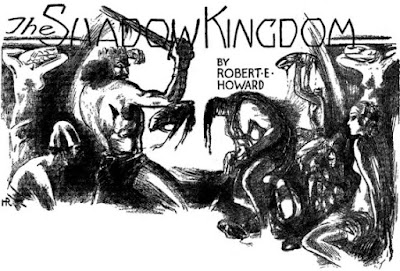 As I said the Shell city was the real center piece of this adventure and is a perfect place to encounter some of the incredibly dangerous and horrid aspects of the serpent men of Lovecraft and Robert Howard. A recent piece of OSR material that can help with to flesh out the development of the serpent men's religion to some of Quagmire!'s NPC's is Obscene Serpent Religion From  Neoplastic Press 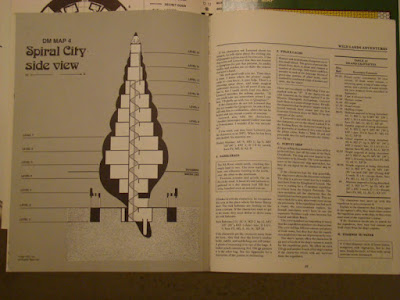 The reason for all of this dungeon master slight of hand is so that the Spiral City can be fleshed out with a solid Lovecraftian background to fit straight right into a sword and sorcery setting with little issue. It also helps to solidify the other worldly quality of X6 which is present in my opinion throughout the module.There are several real world swamplands that can easily take the place of the X6 environs, these would be perfect stands in for using Quagmire with either Dark Albion or Lamentations of the Flame Princess in the 1500 or 1600's. Another possibility is to send the characters into another epoch entirely of Earth during one of Lovecraft's many world cycles with the mechanism to return them to the campaign present in the spiral city. Many of the monsters, treasures, and game elements are very dark and dangerous perfect suited into Lamentations style games! 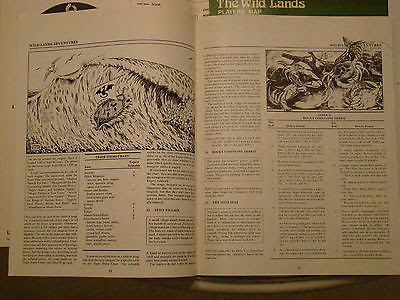 Because of the very nature of X6 a dungeon master could expand it into a complete mini campaign and really expand it as they want. This DYI aspect of many of the early modules was an excellent selling point for me. Look at the material here; "The wilderness of "Quagmire!" includes a pair of large hex maps; 17 location-keyed encounters; an additional 25 encounters that can be placed as desired upon appropriate terrain; multiple wandering monster tables; and even some notes on weather. All told, the wilderness takes up somewhere more than half of the adventure, a fact that's unusual even for Expert-level adventures."  That's what makes this an excellent piece of OSR fodder now. The adventure material isn't all that well known today and just about anything can be placed within the bounds of Quagmire! 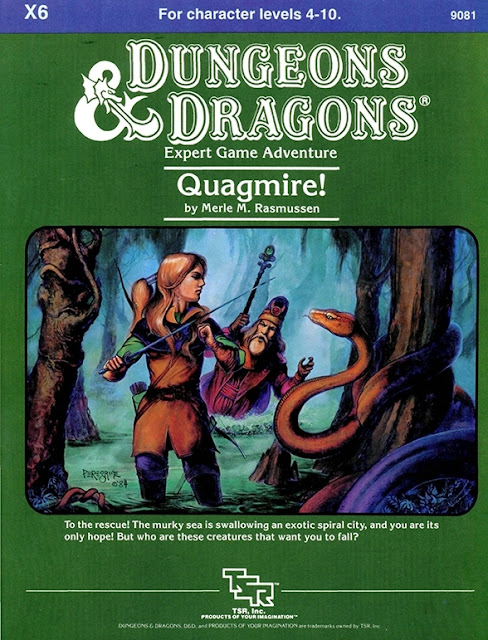