So over the last couple of months I've been debating what to do with the Judge's Guild issue that's been going on in my campaign. Not the controversy of Bob Bledsaw II but instead getting my hands on the The Wilderlands of High Fantasy Boxed Campaign Set for 3.5 D&D. This is one of my unicorns for my archives & next to impossible to get a hold of. With some networking among contacts & friends I was finally able to snag a copy from a friend's family one of whom's players has passed. God rest his soul. 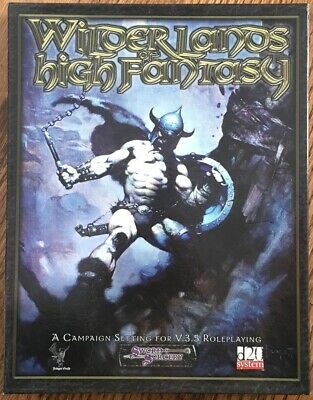 So what does this have to do with my Castles & Crusades game?! Quite a bit actually. Over the years more then a few of my games have been spent in the Wilderlands of High Fantasy.  Why?! Well as its explained;"It is also gonzo as hell, having been born in the time when scifi and fantasy were not clearly distinct, and gleefully embracing both into a weirdass pulp land where both Conan and Flash Gordon would be right at home. The land is littered with crashed spaceships - as mentioned up above - thanks to a prehistoric space war between two different alien coalitions, and amongst the standard fantasy races you've got folks like cavemen (riding mammoths!), amazons (with captive women doing all the menial work and men kept for reproduction), lion, cat, hawk, and even chicken people, and it's not at all uncommon to bump into a perfectly normal human except with his skin blue, red, green, or even entirely transparent."

But surely there can't be a Castles & Crusades connection?! Well thanks to the hard work by James Mishler with Monstrous Menaces #2: Blade Dancer, Goblin, and Tharghûl I can add more depth & weirdness to the Higherlands.  And the rest of this series. 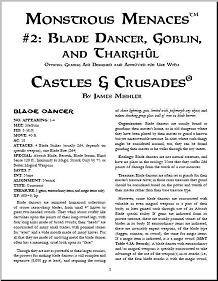 First of all in no way shape or form is this benefiting the latest incarnation of Judge's Guild & second these bastard monsters are perfectly suited to add into James Ward's  Tainted Lands setting. This setting is the perfect overlay for the Demon Lands of Judge's Guild fame. Especially since I'm adding in just a tinge of Arduin with the Hellmaiden thanks to the 'In The Cities.dotcom' entry on Arduin Demology entry on Hellmaidens; "Randall, at Retroroleplaying, provides this description of the Arduin Hell Maidens:

“Hell Maidens (5 to 8 HD) are lovely warriors from the neck down, but their heads are skulls. Generally wear chainmail and use a shield, lance, and sword. While they are NOT undead, only silver or magic weapons harm them, they have all undead immunities as will as immunity to confusion and level drains. They ride Hell Horses. They screech and gibber in combat — and collect the bodies of those they kill for food. Unlike their riders, Hell Horses are undead, skeleton horses with cat-like fangs and green flames for eyes. They have 5 to 10 HD. They have all undead immunities, only silver or magic weapons hit, and they hate dwarves, attacking them on sight unless successfully restrained by their rider.”


This creature is described as a “demoness” in the Pegasus issue – not exactly the case according to a close reading of Hargarve, but they do seem pretty demonic in aspect. One of his other demons is described explicitly as resembling a larger version of the Hell Maiden."
Now what would happen if the Rumps had been dallying with the demonic forces of the Demon lands!? Perhaps one of the Rumps of royal linage is a Tharghûls .

This brings into focus the fact that the forces of Hell are pushing our alternative Earth toward's World War One. Making this the perfect excuse to pull out my copy Tome of the Unclean. Here's where the devil & demon cults are operating behind the scenes in both French & German societies. Agents double dealing from the shadows, cabals of secret societies crossing over into fantasy worlds. 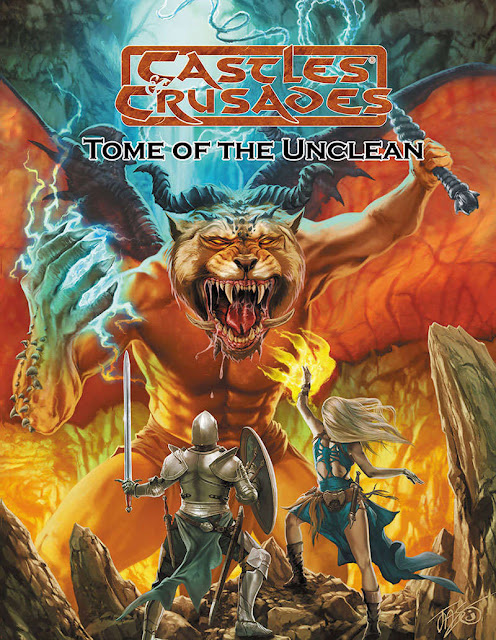 Alliances happening as heroes struggle to keep the cap on things as ray gun battles happen in back alleys of Europe. "A series of swift Prussian and German victories in eastern France, culminating in the Siege of Metz and the Battle of Sedan, saw French Emperor Napoleon III captured and the army of the Second Empire decisively defeated." sets up everything as the forces of the  Victorious rpg scream towards World War One. Its here that James Mishler's Vampires of the Olden Lands comes in really handy for constructing the vampire lords of Europe this slots right into The Codex Slavorum material. 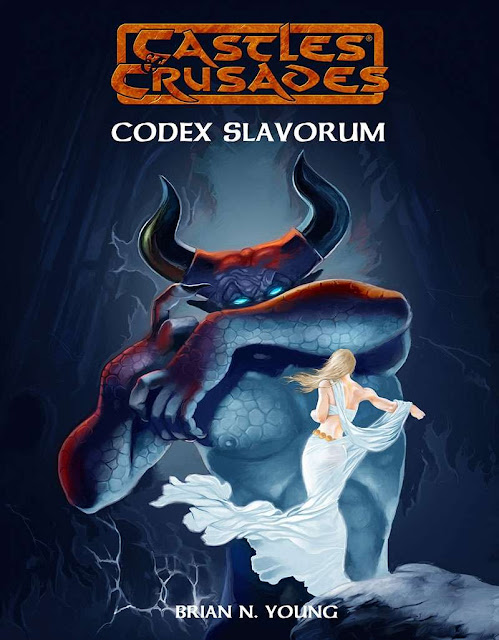 My campaign is a world where cult leaders regularly cross planes into fantasy realms to dally with wizards & demons. This is an Earth where the bounds of sanity are regularly tested & steampunk horror is only around the corner.
The alien Fey of Cha'alt are in a battle for sheer survival against the natural order of this Earth. This isn't anything new & has been happening for thousands of years. 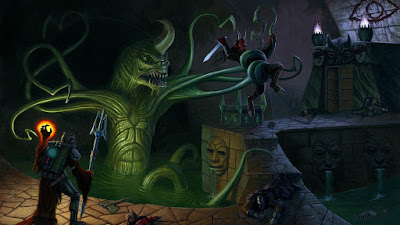 There's a war coming in the shadows & its not going to be pretty at all! The world is growing darker & stars are not quite right. 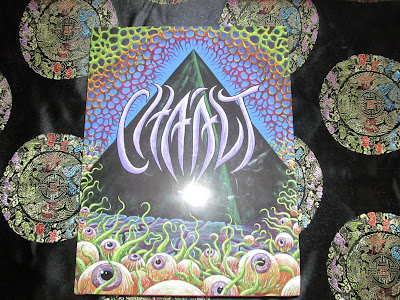