The Brotherhood of the Bell,Book, & Top Hat - An Occult NPC Faction For The Castles & Crusades Rpg & The Victorious Rpg

Last night I was thumbing through the Advanced Dungeons & Dragons first edition Monster Manual & had a bit of a brain storm. What would happen if the wizards, thieves, performers were far more then they seem. This article continues the world of my alternative  1870's  Castles & Crusades & Victorious rpg campaign. 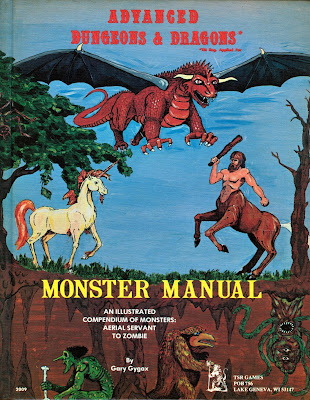 What happens when the plane Prime is under constant threat from the mists of the lands of the Undead?! Wizard guilds & the like can't really be exposed to the public. Or can they?! What if all those Dungeons & Dragons thieves & magician guilds were all around us the whole time in 1870's New York or London?! This isn't our world instead this is the world of a ten year old boy who would grow up to become one of the magician supreme of his Earth. In 1810 young Harry Kellar has his first encounter with other worldly  An Illithid just as its about to feed from local vagabond. Young Kellar surprised it & was able to save the vagabond. This vagabond was actually one of the gadgeteer behind the "The Davenport Brothers and Fay" spiritualist stage acts. Harry Kellar took his first step into the world of the traveling magician; "As is the case with most magicians, there is little of Kellar's early life that can be confirmed. His real name was Heinrich Keller and he was born to German immigrants in Erie, Pennsylvania.[1] He was sometimes called Henry, but later changed it to Harry.[2] As a child, Kellar loved to play dangerous games and was known to play chicken with passing trains.[2]

Kellar apprenticed under a druggist and frequently experimented with various chemical mixtures. On one occasion, Kellar reportedly blew a hole in the floor of his employer's drugstore.[2] Rather than confront the wrath of his parents, Kellar stowed away on a train and became a vagabond.[3] He was only ten years old at the time.[4]

Kellar was befriended by a British-born minister of religion from upstate New York. He offered to adopt Kellar and pay for his education if he would study to also become a minister. One evening Kellar saw the performance of a traveling magician, "The Fakir of Ava", the stage name of Isiaiah Harris Hughes, and, after the show, Kellar "immediately got the urge to go on the stage". He later told Houdini that, "I became very restless, bought books on magic and finally left my friend and benefactor".

While working on a farm in Buffalo, New York, Kellar answered an ad in the newspaper that was placed by Hughes, who was looking for an assistant. Kellar was hired and, at the age of sixteen, gave his first solo performance in Dunkirk, Michigan; it was a disaster and Kellar went back to work with Hughes.[5] Two years later, Keller tried again with better results, but, as he was in poor financial condition, his early career often consisted of borrowing equipment for the show and avoiding creditors"
Gageteers & thieves guilds over the centuries morphed into the workshops that provided magicians with the incredible stage illusions & tricks that they used in their shows. This cover also enabled thieves guilds in various cities to provide magicians like Kellar with much needed muscle. 'The Brotherhood of Bell,Book, & Top Hat' was made up a wide variety of adventurers, performers, bards, and even serious occult  academics. 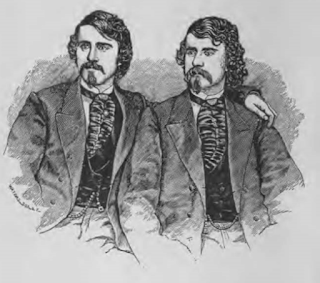 Sketch of the Davenport brothers

"The Davenport Brothers and Fay" did the best they could to give a well rounded education in the ways of the fighting the supernatural. But Kellar began his own storied career across the world. He was always one to help various other magicians & adventurers in the field. His expertise in the realms of the supernatural,occult esoteric subjects, etc. but his real & only love was the stage. 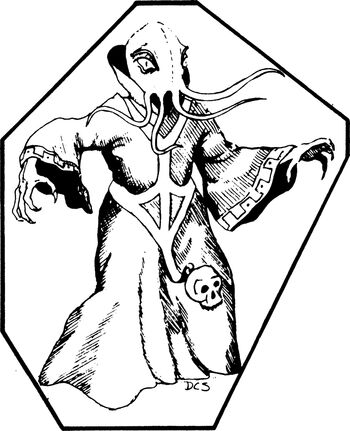 Kellar was always haunted by his youthful encounter with the Mindflayer & even throughout his life it always haunted him. It would come to form the basis with a shared experience with Harry Houdini whose exploits with the illiad were the stuff of legend. 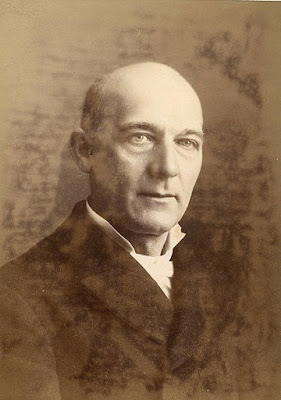 But it was the death of  rival magician Alexander Herrmann in 1895 that shook Kellar. There were rumors of foulness in the air surrounding his rival's death after the King of Magic affair. Note that the real  Alexander Herrmann died 1896 at the age of fifty two but this passing is strongly connected with my campaign. 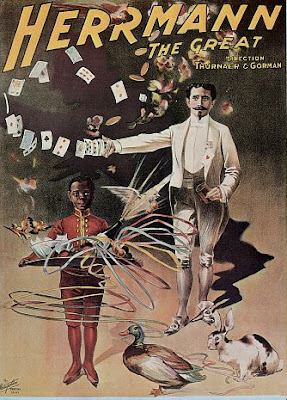 Kellar allowed Howard Thurston  to take over not only his act but his career in fighting the darkness;"Kellar retired in 1908, and allowed Howard Thurston  to be his successor. Kellar had met Thurston, who was doing card tricks, while on vacation in Paris, France. Kellar did his final show at Ford's Theatre in Baltimore, Maryland.[12] Kellar eventually moved to his house in Los Angeles, California. Kellar's wife died two years later.

Kellar was often visited by other magicians, notably including Harry Houdini.[4] On November 11, 1917, Houdini put together a show for the Society of American Magicians to benefit the families of those who died in the sinking of the USS Antilles by a German U-boat (who have been considered the first American casualties of World War I).[13] Houdini got Kellar to come out of retirement to perform one more show.

The show took place on the largest stage at the time, the Hippodrome. After Kellar's performance, Kellar started to leave, but Houdini stopped him, saying that "America's greatest magician should be carried off in triumph after his final public performance." The members of the Society of American Magicians helped Kellar into the seat of a sedan chair, and lifted it up. The 125-piece Hippodrome orchestra played "Auld Lang Syne" while Kellar was slowly taken away.[4]

Kellar lived in retirement, until he died on March 3, 1922 from a pulmonary hemorrhage brought on by influenza.[13] He was interred in Angelus-Rosedale Cemetery in Los Angeles."

Howard Thurston was a worthy successor continuing the 'Brotherhood of Bell,Book, & Top Hat's' tradition of taking adventurers, hirelings, etc. from other worlds as stage hands,etc. all of the while using these visitors from strange worlds as back up in the fight against supernatural evil. 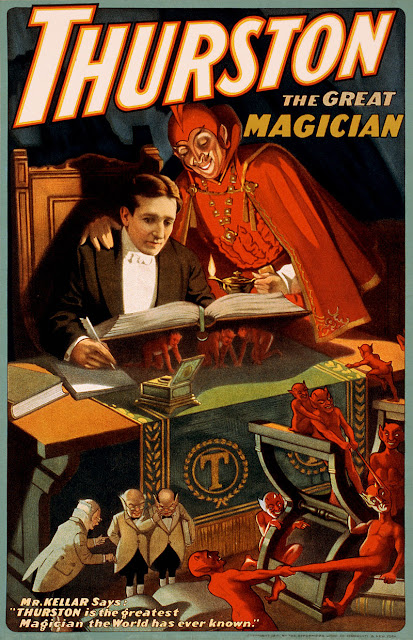 Howard Thurston would himself go on to a storied career battling supernatural evil well into the late Forties. This would lead to his early confrontation with both the lich form of  Rasputin & his demonic minions. The Brotherhood of  The Bell,Book, & Top Hat continues to be active in America at its headquarters in New York City & The Magic Palace (an alternative Earth version of the Magic Castle)  out in California. 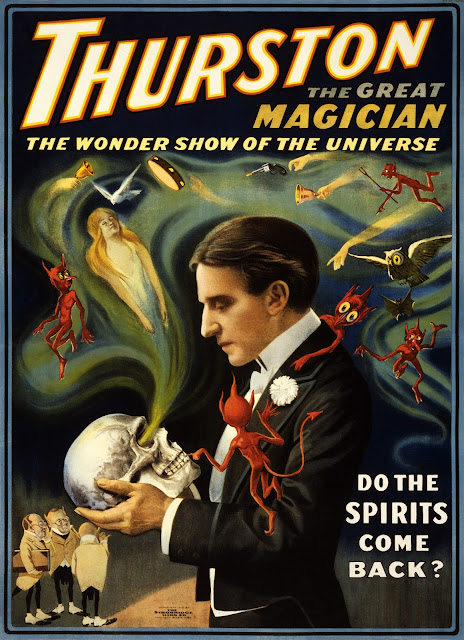 Note that I have utmost respect & admiration for stage magicians & performers, this occult faction was inspired by Lord of Illusion by Clive Barker both the story & film. And several letters to Ray Bradbury may God Rest his soul. This world is poor without him RIP my friend.
Posted by Needles at 7:35 PM