"In the far reaches of Hyperborea’s Crab Archipelago lies a small, mountainous island known as Crystal Point. Passing sailors recently have witnessed a crimson glow in Crystal Point’s waters and beams of russet light shining up from its steep cliffs. Too, unusually frequent lightning storms in the area have torn the sky in blinding flashes, shattering the air with their awesome sound. The seedy wharf taverns of Khromarium and elsewhere buzz with these strange tales—some even speculate that Crystal Point may hold the lost treasure of Atlantis!
'Lost Treasures of Atlantis'
The Astonishing Swordsmen & Sorcerers of Hyperborea rpg line
is available right here. 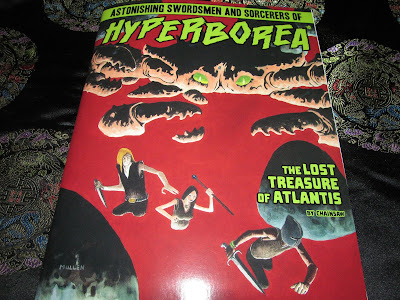 Q: How did you start with Dungeons & Dragons & how long have you been professionally writing as well as designing under the Chainsaw nom de plume?
A: First played in the early 90s, when my super-cool grandmother bought me a Basic set. Loved it and quickly moved to AD&D and ran games for my friends for years. We couldn't make heads or tails of the TSR modules of the time, so we always used homebrew materials. I took a break during college and in my 20s, then picked up again when my good friend capitalbill started running an OD&D game with S&W. Eventually I started up an AD&D game and then began running AD&D/AS&SH events at NTRPG Con and Gary Con.

Atlantis was my first effort at a published dungeon, though it released after my other credit, Brazen Bull (in Rats in the Walls and Other Perils). I decided to write under Chainsaw because that's how I'm known on the forums and at the conventions.

Q: The obvious question to begin. How did you develop 'Lost Treasure of Atlantis' for Astonishing Swordsmen & Sorcerers of Hyperborea?
A: I had an idea in early 2015 for a complex dungeon on an island, effectively a "mini mega-dungeon," then spent most of 2015 bouncing between mapping, keying and writing. Lots of times I'd end up revising earlier decisions, especially as I playtested (2016-2018) and saw what worked and what didn't.

Q: You've run  'Lost Treasure of Atlantis' well over a hundred times now. How does your module differ from some of the other OSR Sword & Sorcery modules on the market?
A: Well, not quite *that* many times, but I have run it 16 times for 100+ people, which still gave me tons of great insight into
how to make improvements.

As for how it differs from other modules, I really can't say. I generally don't read a module unless I'm running it and what I have run has been designed by well-regarded names, so I'm hoping their strengths have rubbed off on me!

Q: How did you find running 'Lost Treasure of Atlantis?' & what were some of the pit falls?
A: I enjoyed it because the dungeon's non-linearity, distinct-feeling levels and high interactivity kept it interesting - every party brought new situations for me. Of course, the price of admission there is that you have to prepare really well. You can't assume the party enters a certain way and then proceeds a certain way when there are multiple entrances to the levels and connections between the levels. It puts many, many rooms within striking distance. You never know how it'll go down!

As for the pitfalls of running it, apart from the design requiring a good command of the material, it was also much too large for a single four- or six-hour convention session. I addressed this problem by creating some mini-quests tied to certain areas. This gave the groups some direction and a sense of accomplishment despite not being able to explore the location fully. My play testers loved it - some even signed up for a second game so they could see what they'd missed. Even that failed to cover all of the material though. It's a big place.

Q: You've been highly active in the AS&SH rpg community & one of the most vocal fans of the AS&SH  game over the years how did this help you at conventions to run the module?
A: Tremendously! There's a great group of friends at the Hyperborea and Knights and Knaves Alehouse forums that regularly attend NTRPG Con and Gary Con. It's easy to coordinate on- and off-grid games with people who appreciate what you're doing.

Q: This module seems to be a cut above some other OSR modules that I've seen over the years how long was 'Lost Treasure of Atlantis' in development & how did this change the direction of the adventure when it first started?
A: I had the idea in early 2015, spent most of that year mapping, keying and writing, then play tested from 2016-2018, always being sure to revise it based on what worked. These changes were usually smaller things that made a room or situation clearer, more interactive or more interesting. The main concepts and maps didn't change too much. I finally turned in my word doc draft in late 2018 and then NWA began their additions, editing, layout and certain other aspects of production.

Q: How is the 'lethality factor' of 'Lost Treasure of Atlantis' in your opinion compared with other OSR modules?
A: The groups that relied on brute force (e.g., kicking down doors) usually fared the worst, which was my goal. I think higher-level modules should challenge players to rely on more than their battle skills - to interact cleverly with intelligent creatures, exploit utility spells wisely, gather information, have good plans, etc. Anyway, I think we only had two or three TPKs, but there were a lot of one-off deaths. Someone probably died at least every session! We're also talking con games though, where people sometimes throw caution to the wind, especially toward the end of a session. Hard to say how it compares with other modules because I don't read many modules.

Q: 'Lost Treasure of Atlantis' adds even more to the world of Hyperborea setting  & really cranks up the 'alieness' & otherworldly aspect. How does your home campaign of Hyperborea differ from the 'official' AS&SH Hyperborea?
A: I don't have a home campaign at the moment, though I've run a couple of good, but relatively short, AS&SH Roll20 campaigns (10-15 sessions) over past few years. I would say that those two campaigns were pretty well grounded in Hyperborea. Remember though, one of the setting's strengths is that it hints at things and lets you fill in the blanks.

Q: Do you see yourself returning to the world setting of Hyperborea in the future for other projects?
A: Maybe! It's a great setting for me because it's rooted in pulp, which tends to be pretty varied and flexible.

Q: How did you find working with the North Wind Adventure crew?
A: Consummate professionals.

Q: On average what's your favorite amount of players for a module like 'Lost Treasure of Atlantis' and how long should in your opinion this adventure take to go through?
A: I prefer games of 4-6 players, regardless of module. At the cons, I'll sometimes run tables of 8-10 so that I can accommodate friends, but these games usually wind up a bit too slow for my tastes. As for how long it might take, hard to say. Groups vary greatly. There's at least a session of material in the town and at least three sessions on the island, so maybe four for a really efficient group.

Q: Do you have a love of Swords & Sorcery or High Fantasy literature or Appendix N material? If so do you feel that this helped you to achieve a greater scope for 'Lost Treasure of Atlantis?'
A: Hmmm... Frank Frazetta, Karl E. Wagner (Kane), Clark Ashton Smith (Hyperborea), Vance (Eyes of the Overworld), Burroughs (Barsoom) and Tolkien... but I also love He-Man, Thundarr, Scooby-Doo, Alien(s), Apocalypse Now, Clash of the Titans, Conan, Goonies, Ghostbusters, Indiana Jones, The Road Warrior, Star Wars (IV-VI) and lots of metal music, 8-bit NES games and other horror, post-apoc, sci-fi and western movies. I kitchen sink it, man. No inspiration off limits.

Q: Overall are you pleased with the final  'Lost Treasure of Atlantis' module or do you find yourself looking over your play & campaign notes thinking that there's even more adventures within the 'Crystal point' area of Hyperborea?
A: There's always more to be had, right? I could see adventures liberating slaves from crab-man copper mines, assassinating crab-man leaders at an undersea military complex or even chasing them off-world to Poseidenos, for example. There are also springboards to Underborea, of course. So, lots of potential!

Q: And what are your future OSR endeavors coming up? You've got the floor so plug away!
A: Ha! Thanks. I'm working on a new volcano dungeon (for OSRIC), similar in scope to Atlantis (maybe a little bigger). Planning to play test it this summer at NTRPG Con. Speaking of which, I should probably go work on it now!

Thanks for taking the time to speak with us at Swords & Stitchery & yeah you'd better get back to work now..AS&SH art by Mick Fernette 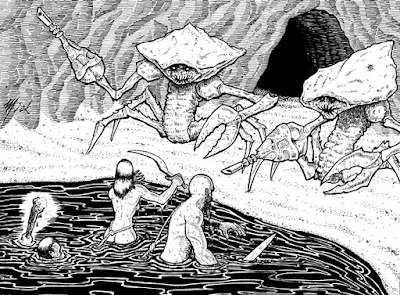