"Tegel Manor, a great manor-fortress on the seacoast, is rumored to be left over from ancient days when a charm was placed over it protecting it from most of the ravages of time and human occupation. The hereditary owners, whos family name is Rump, have been amiss in their traditional duty of providing protection for the market village to the west. " 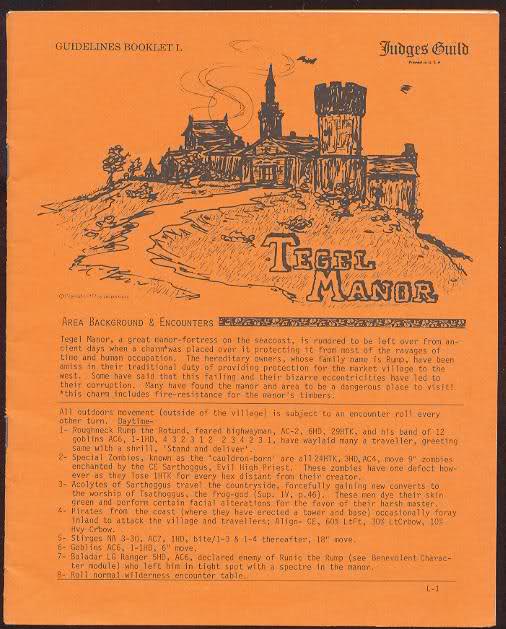 "Some have said that this failing and their bizarre eccentricities have led to their corruption. Many have found the manor and area to be a dangerous place to visit!"
Its been a long while since I dusted off my version of  Tegel Manor.The first thing I want to clarify is that Tegel Manor is not an old school adventure. Instead, Bill Owen and Bob Bledsaw's Judge's Guild classic Tegel Manor is a playing aid. So its basically set up to be a sprawling haunted house challenge for player's PC's. Its basically a 240 room giga dungeon adventure location & has all of the considerations including a village base of operations for the PC's. But its haunted house dungeon ecology isn't up to modern OSR code  like the Adventurer, Conqueror, King rpg  Nethercity's adventure going on Kickstarter here's a sample of what I'm talking about;
"the ecology of the Nethercity. The combination of the sewage flow from the collapsed cesspit (1a) with random traffic from the teleportation portal (12c) and the underground river (16) has created a strange and complex ecology within the dungeon. It works like this:
Prior to 329 BE, when the cesspit broke open, the Nethercity’s ecology was much less complex. Only a few tiny groups of troglodytes and white apes – experimental subjects of the elves – survived the Nethercity’s fall. The apes and troglodytes fed on fish from the underground river and on whatever stumbled in via the teleportation platform (12c). Eventually, both groups discovered the platform itself and figured out that it could take them to hunting grounds outside the Nethercity. Some of the apes and troglodytes that departed on the teleportation platform never returned to the Nethercity, but a few continued to lair there even as they hunted on the surface. 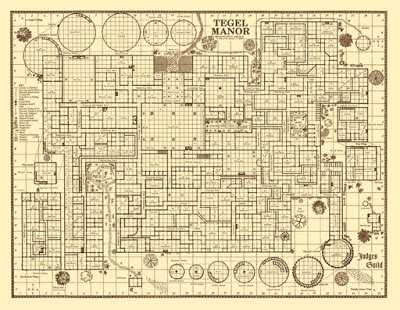 Tegel Manor does something very different, it allows the DM to fit the adventure location into their own old school campaigns. Tegel Manor has a lot going for it including the outline here that it could be customized to the DM's haunt house specifications. That's been one of the tickets to using the supernatural elements of the Rump family. Customizing the weirdness of the Rump family. In the past I've used many of David A. Hargrave's Arduin supernatural elements & undead twists to give Tegel Manor a whole different adventure  feel.
Arduin's gonzo elements make Tegel manor feel like something out of a classic Eighties VHS horror comedy flick like Ghost Busters or the House series of movies. 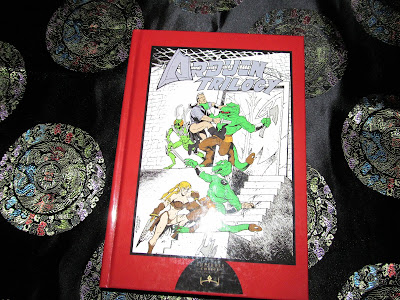 Flip the adventure location over to Astonishing Swordsmen & Sorcerers of Hyperborea second edition. Suddenly the adventure location becomes the perfect pre Green Death plague location. The Rump family did have survivors after the plague but many of them have become representatives of the various strains of undead found in classic Dungeons & Dragons. The whole adventure affair becomes very Clark Ashton Smith in nature echoing strains of Zothique & the Averoigne stories. In fact the undead of the second edition of Astonishing Swordsmen & Sorcerers of Hyperborea are ideally suited to running Tegel Manor. 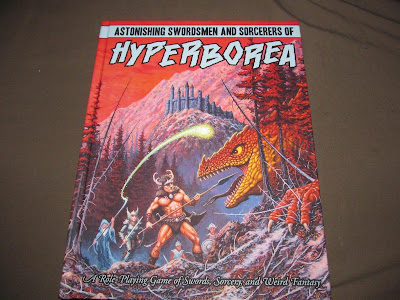 "Tegel Manor vexes the Grognardia blog", well it didn't vex me at all. And in fact provided the ideal old school location to add in as a multidimensional adventure location that would move across the planes on its own. Tegel Manor & its village move from place to place causing havoc & mayhem where & when it went.
As one reviewer put it,"It must be said that there is a certain Castlevania-esque feel to the whole thing, which is a huge plus in my book."
The idea of the Castlevania-esque advantage of Tegel Manor is exactly how I'm going to use the adventure coming up!
Posted by Needles at 11:10 AM