The following notes & expansions are on the extra dimensional & Outer Darkness menace known as the Star Spider. 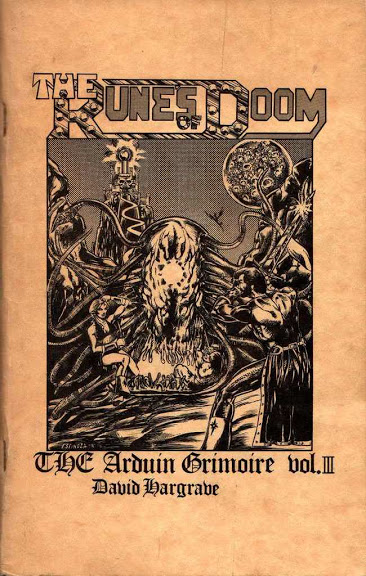 The auditorium filled with spectators & senators from across Pan American Empire,Marcus Orearlus  of extraterrestrial studies department  of the college Alchemists and Elementalists looked the crowd over & waited till they were seated.
"Welcome friends,senators,  alumni, & respected laymen tonight we are going to speak about one of the most dangerous & least understood members of the family of Outer Darkness monsters. We are not even sure if the dreaded Star Spider is even alive in the conventional sense as we know life'.  "This is not a new enemy but a very old one that we face! The Space Spider has stalked us through the ages! We must beware its tendrils and its eye that burns with the light that never warms. I myself have heard the howling, sucking, roar of this stalker from between the dark of the stars. Observe the stellar scope for a three vi broad cast of the Ultra probe incident from 20 March 1996 Earth 43* & then the "Tony Cellini incident" from 877 days after the Earth's Moon left orbit.

"I refer you now Ladies and Brothers to World Space Commission Medical Department form regarding the status of one Captain Tony Cellini and the reports that are attached.  May the Gods themselves have mercy on his soul."
"From that incident and my own research I have made  several assessments. The  Space Spider makes its lairs within the wrecks of space craft. It uses the wreckage as both lair and for its own procreation. These space craft become entangled a web of hyper dimensional energy for these monsters act as anchor in the local space time continuum.
These uncaring predators are gluttons feeding on as many victims as they can. They roast all of the life essence and vitality from their victims.
They have the characteristics of both "dimensional shamblers"  and the dread Hounds of Tindalos." 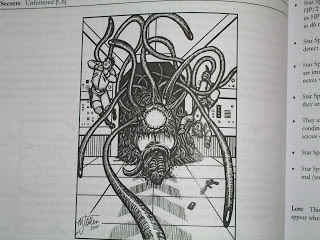 " These beings use combination of psychic lure and assault to force their victims within range of their tentacles. The monsters mouth  orifice is like a blast furnace stripping a man to a burnt shell in seconds and absorbing the soul. The creature is a glutton feeding on as many souls as it can stuff into maul.
The creature is capable of moving across time and space within moments. It departure signaled within the span of moments by a light show of swirling lights and a rushing of wind, light, and psychic insanity.
This wind is accompanied by fog generated but both the creature itself and its body being suspended between our reality and else where. Some have sworn the Outer Darkness and others have said lower dimensional spaces."
" These monsters exist in timeless dimensional limbo where the passage of time means very little and yet they can lay dormant for thousands of years. The beasts move along atesseract of foamy dark lower realities. They often have several lairs along inter dimensional axis routes.
If you refer to page 42 of my report we shall exam the tendril strength of these creatures which is just as capable as a small "space kraken."  The most terrifying power of these beasts is of course the so called Psychic Death Kiss.  These monsters once encountered can track prey that has escaped them years or months later. They act as sort of "paranormal murderers" stalking those who have escaped their grasp. Sometimes upwards of ten years or more eventually the creatures will come for their prey."
"They're presence is denoted by a howling  roar and a soul sucking wind that is generated by the mouth of these monsters. Indeed their inner gullet is like an atomic blast furnace. "
Please pay no attention to the Magus high guard who have entered the meeting around you."
Marcus Orearlus paused and sipped his water for a moment collecting his thoughts and paid special attention to Gelbrus Cronos the Elemental guild master in the front.
" As I have said I have had personal experience with these monsters. The doomed Argos mission encountered a lair of these beasts in late August three cycles ago when we were exploring the Pyrius sector.  Only myself and my late wife survived the encounter. The guild master himself authorized the expedition but I digress."
"This is not the only species of the Space Spider that mankind has encountered. The Gods themselves have cursed mankind going back thousands of years and only recently has this species brought to light."

Carlo Rambaldi’s incredible Medusa from Perseus Against the Monsters 1963

" Further research indicates that the victim is both alive and aware the during the entire time they are petrified by the monsters. They are locked in a state of torment and the monsters feed upon their very souls as time passes. The beasts have veritable garden of stone statues that they feed off of. Victims within this state can last ten to twenty years of time." "The medusa is a very stealthy hunter and able to sneak up its prey with its attack. A single glance and the very soul of the victim is frozen along with their flesh. And why the eye? Because it is the window to the soul. Upon our colony of Alphas II we encountered such a beast. " 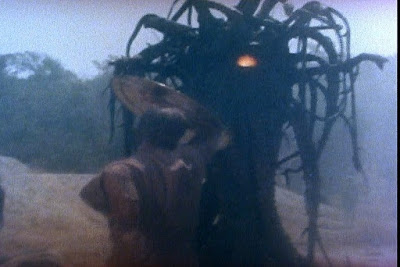 "The medusa had been dormant for more then ten years within its valley. Cyber centurions working on behalf of the colonists disturbed the sleep of this monsters. We lost half a company to the creature. The results of this encounter are well known. Please see report 23 in your briefing""

"Gelbrus Cronos the Elemental guild was also responsible for this outrage and only then did we learn that these creatures and their larger brethren have visited mankind many times in the past.
There was ruined temple upon the colony world and within its halls were indications that millions of years ago during the Atlantian period of these creatures were summoned to Earth with astonishing regularity. Because of the necro dimensional magic of certain Atlantian sects the fabric of space time was weakened allowing these creatures free access to the  Earth's space time. Most of these spells or psychic keys have been lost in the mists of time. However certain indications also point to activity of these monsters during the so called Twilight years after the Atomic Wars.
Also similar symbols were found within the caverns of Mars. Could ancient Barsoomian psychic rites have paved the way for these monsters there as well? Why even my own beloved wife subcombed to the lusts for the human soul that creatures exhibit. Gelbrus Cronos the Elemental guild is sitting upon such a symbol right now. Notice the lights beginning to dim my friend and that roaring that your hearing right now. I was also aboard the Argos. I escaped it you see but one never really escapes it. The dreams come. My wife knew that. Let me comfort you and tell you all about it in our final  moments together.This meeting is now over"
The strange lights began to swirl and rushing got very loud indeed and the screaming began. 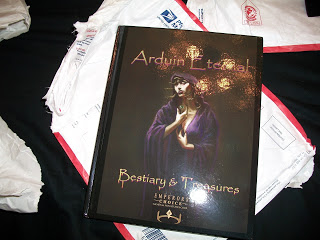 The star spider is a high level monster from the Arduin game books of Dave Hargrave & The Arduin  Eternal line that has seen action within several of my campaigns. The star spider has been plaguing mankind for thousand if not millions of years. The creatures appeared to have interaction on planet ten and Barsoom.
The Space Spider Medusa

Hit Dice: 6
Attacks: Petrifying gaze
Special : Immune to magic, most psychic abilities, regenerates as troll
Move:12
HDE/XP:8/800
These creatures can be summoned by a summon monster spell but can not be controlled by such. They are very dangerous and have a horde class of XII.
"The Medusa" originally appeared in the sword and sandals flick Perseus vs The Medusa. It was designed by the monster maker maestro Carlos Rambaldi himself. The creature later appeared on television as part of the "Sons of Hercules"series The part of Perseus played by  Richard Harrison