So its Nineteen Seventy Four & I'm four years old digging though my favorite uncle's stash of comics & comic magazines. I spy a new one he's just gotten & he waves me off of it. We're talking about The Savage Sword of Conan Curtis imprint. 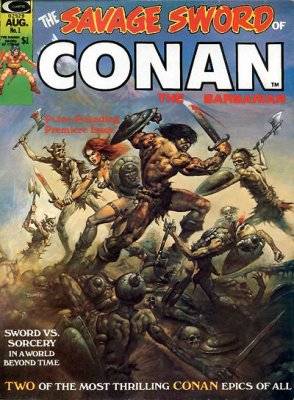 "The Savage Sword of Conan was a black-and-white magazine-format comic book series published beginning in 1974 by Curtis Magazines, an imprint of American company Marvel Comics, and then later by Marvel itself. Savage Sword of Conan starred Robert E. Howard's most famous creation, Conan the Barbarian, and has the distinction of being the longest-surviving title of the short-lived Curtis imprint."
This is one of the most iconic & cultastic comic magazine titles that stayed on my comic shop pull box & it hardly ever disappointed;
"As a "magazine", Savage Sword of Conan did not have to conform to the Comics Code Authority, making it a publication of choice for many illustrators. It soon became one of the most popular comic series of the 1970s and is now considered a cult classic. Roy Thomas was the editor and primary writer for the series' first few years (until issue 60), which featured art by illustrators such as Neal Adams, Dick Giordano, Barry Windsor-Smith, John Buscema, Alfredo Alcala, Jim Starlin, Al Milgrom, Pablo Marcos, and Walter Simonson. Painted covers were provided by such artists as Earl Norem, Bob Larkin, and Joe Jusko."
It was nasty, lusty, & had Sword & Sorcery action in spades & it was fantastic fodder for a fledgling dungeon master to bring the players to the table.  This wasn't simply a magazine but a great resource for a budding dungeon master.
It was also some of the first exposure that I had to H.P. Lovecraft & Clark Ashton Smith's mythos. " The cover of issue #5 sports a Boris Vallejo painting of Conan being crucified, from the story "A Witch Shall Be Born". This story features Conan at his most resilient, surviving a desert crucifixion to get revenge on the man who put him there."

This was Conan at his most resilient & dangerous, Sword taught me a lot about how PC's should be put in danger & the lengths that they'd go to to gain revenge on NPC villains. These were stories straight out of the back bone  of various eras of Conan's life & it gave a formula for writing adventures that could take place in various eras of a PC's life. This meant that a dungeon master wasn't restricted to linear game play.
This was a trick that I've used time & again to pin ball levels & eras suiting play around the players rather then the adventure.

"The adventures in Savage Sword of Conan are not always consecutive (as they are in the color Marvel title Conan the Barbarian), and they cover different eras of Conan's life. The Savage Sword stories mostly feature an older Conan, and adapt R. E. Howard stories and pastiches starting from "Black Colossus" (according to the Miller/Clark chronology), thus following the Roy Thomas stories in Conan the Barbarian."
Everything in The Savage Sword of Conan is keyed to the interactions being grand gestures of Sword & Sorcery. Conan is a driven inhuman being of incredible acts of both bravery & savagery. There's plenty of dungeon crawling within these books & Marvel provided lots of T&A or implied it I should say. 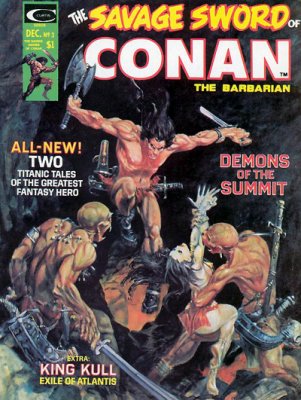 The Savage Sword of Conan was a magazine that took lots of riskier from the moment that it broke on the scene & it was a comics magazine that didn't pull punches with its audience. Treasures were recovered but frequently lost to the gambling of Conan. There was also lots & lots of violence on the bad guys. Savage was relentless on Conan's war on the bad guys. His never give up or surrender could infuriating for some readers but this was from a very different time period.

For old school adventure design there was a definitive old school Sword & Sorcery  formula for the writing: