So way back about 2015 or so, I started seeing rumors & water cooler talk about a new set of Carcosa books by Geoffrey McKinney.
Today I got an email requesting a review of  'Barrens of Carcosa'  Barrens was the first of the adventure modules that I got for Carcosa from Lulu back in 2016. Its a bit of a departure from the B/X good nesss of Lamentations of the Flame Princess Carcosa black edition. How so? Well, Barrens doesn't have the adult occult controversial content that the LoFP adventure source book has. This adventure is meant for Advanced Dungeons & Dragons and adds a whole new set hex crawling adventure locations to the Carcosa setting. It adds traditional AD&D first edition alignment axis to Barrens of Carcosa NPC's within the hex crawl. This isn't actually a bad thing but its going to be interesting to say the least if your using this product with LoFP Carcosa because what it does is adds in more insight into the motives & motivations of the NPC's of Barrens.  After a short introduction into Carcosa with its Robert Howard Serpent Men demi god cosmic scientists  we dive right into the meat of Barrens of Carcosa. That is because this is actually a hex crawl encounter kit as much as a module.  Its designed so you can drop some group of smuc erm adventurers into the thick of a hex & come Hell or Cthulhu they'll have to survive. 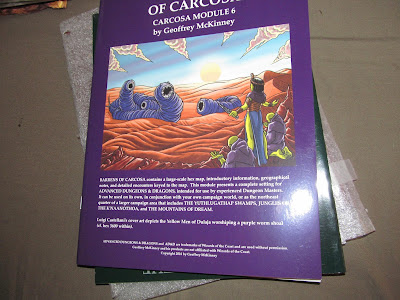 This is a down and dirty survival horror hex crawl with a Jack Kirby slant & a fully moded out set of encounters within the adventure for this region of Carcosa. There are within the module series besides Barrens of Carcosa which is a part of the northeast quarter of a larger campaign area that includes THE YUTHLUGATHAP SWAMPS, JUNGLES OF THE K'NAANOTHOA, and THE MOUNTAINS OF DREAM.


The module's encounter levels vary tremendously between PC levels as does LoFP's Carcosa but this is where the similarities end. As I said before these are meant for Advanced Dungeons & Dragons first edition or OSRIC. They make full reference to various AD&D monsters & some minor concepts. The adds for this module make it clear that these modules are for experienced dungeon masters only. This module has some of the science fantasy aspects to it but these are far & fewer reflecting the change in mode. This isn't a bad thing but different because Barrens of Carcosa plus into Advanced Dungeons & Dragons first edition & its a different region of Carcosa itself. 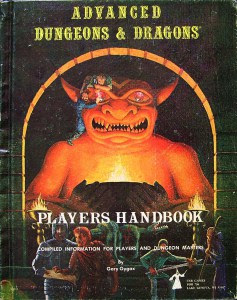 Statistic information & layout is different but clear for the DM to deal with difficult encounter issues. There's plenty of room for Carcosa DYI efforts on the DM's part for their own campaign but hex encounters are laid out better. Population, resources, alignment, etc. is all there at the DM's finger tips. Understand that this is bare bones from the ground up with some really well done weird areas & Geoff excels at weird areas damn well. There are various nods to Lovecraft & his circle of writers here & over in that slime pit there. 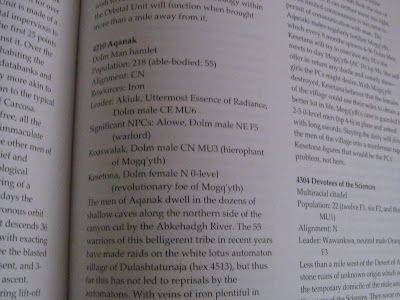 So are you going to need your AD&D Monster Manual? Possibly but I didn't when I ran Barrens of Carcosa but I've always had a soft spot for the Carcosa setting. Because its a hex crawl there's as I said plenty of room for the DM to leave their own sweaty thumb prints all over this module/setting book. The possibilities are pretty endless of how the PC's are going to deal with some of the module's elements. So is all doom & gloom in Barrens of Carcosa? Surprisingly not all, because there are lots & lots of Spawn of Shub Niggurath! Not all of them are immicial to mankind & some are down right friendly (sort of in that weird Carcosa way). 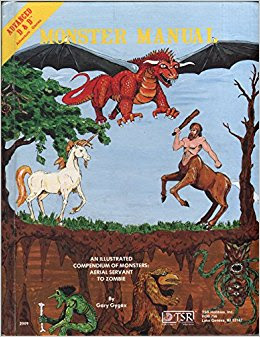 Could Barrens of Carcosa be played with the Lamentations of the Flame Princess source book or B/X Dungeons & Dragons or its attendant retroclones? Well in a word yes with some minor modifications to stats, armor class, etc. In point of fact I would say that the LoFP Black Carcosa book adds a bit of range to the science fantasy artifact roaster, its not necessary but its a sweet sourcebook to have when running Barrens!
The back maps give a good overview of where the hex's are in this module for AD&D Carcosa additions to the campaign. Map turned on its side to thwart my players. 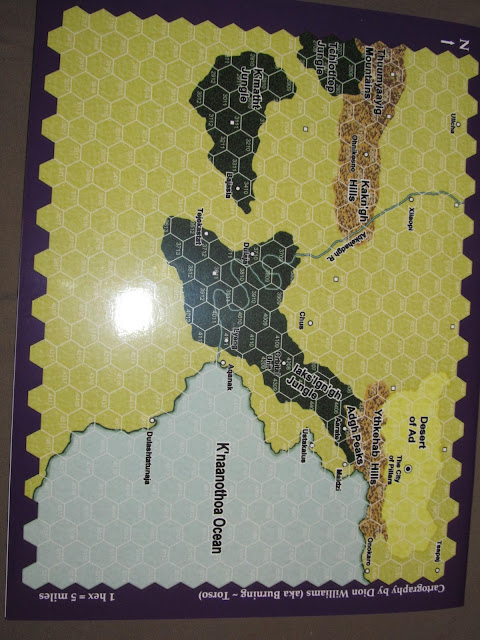 So is Barrens of Carcosa worth the 12.99 price tag? Well, in a word yes with some caveats. I've run this module as part of a marathon of Carcosa/Gamma World goodness & well I stranded the PC's here! They've managed to survive but Barrens has a lot more Lovecraftian references including Great Race artifact areas, some vicious Great Old One cults, & some surprisingly dangerous high technological encounters. Others have said that the lack of artwork is a step back for  Geoffrey McKinney's Carcosa modules.
The fact is that I totally understand that sentiment but I'm someone who grew up with Judge's Guild material & the lack of artwork to save on costs is understandable. The lack of artwork in thirty two pages didn't cause me any pain. Do I think you should get Barrens of Carcosa? If your a Carcosa fanatic like myself? Then yes absolutely. If your just getting into Carcosa then get the LoFP black Carcosa book first & then get Barrens of Carcosa. Its got a different feel but for me its much more approachable in some regards.
But now back to the email request, it came in from one of my players who PC is still trapped on Carcosa from our Gamma World/Carocsa crossover. We used the Barrens of Carcosa module for that game! More to come coming up on that front soon!


Barrens of Carcosa is
available right over here!