"To arms! To arms! The battle lines are drawn as desert men and inhuman tribes wait poised to strike on the fertile and rich lands of the east. The call has gone out through the civilized lands. The armies have been raised to match the invading foes from the west. Nobles and peasants have joined swords to greet the foes.

But Fate or Chance has decreed another role for a small few. No glorious banners will wave on their march. No squadrons of knights will charge at their word. Instead, they will fight the war through stealth, secrecy, and cunning. The risks they will take are great, but the fates of both armies lie with them.

It begins one night for your party far from the fighting. Suddenly you are entrusted with the most dangerous missions of the war. Can you cross the Sind Desert, occupied now by enemy armies, to find the Great Pass? Can you find the one known only as The Master? What will you do if your do find him?"


I've been thinking about a Sword & Sorcery adventure to get my ACK's/Astonishing Swordmen & Sorcerers of Hyperborea second Fall campaign off the ground. I've been carefully looking into X4 Master of The Desert Nomads. Recently I've looked into using David 'Zeb' Cook's B6 The Veiled Society with AS&SH second edition for an urban adventure.
But I'm really interested in, " X4: "Master of the Desert Nomads" (1983), by David "Zeb" Cook, is the fourth adventure in the Expert series for Basic D&D and the first adventure in the Desert Nomads duology. It was published in 1983." Why? Because this adventure to me has a very hard pulpy Sword & Sorcery core to it in my mind. Everything in X4 is completely centered around the plotcentric adventure's structure, encounters, & it just seems like the sort of a high octane adventure that would work well for both ACK's & AS&SH. 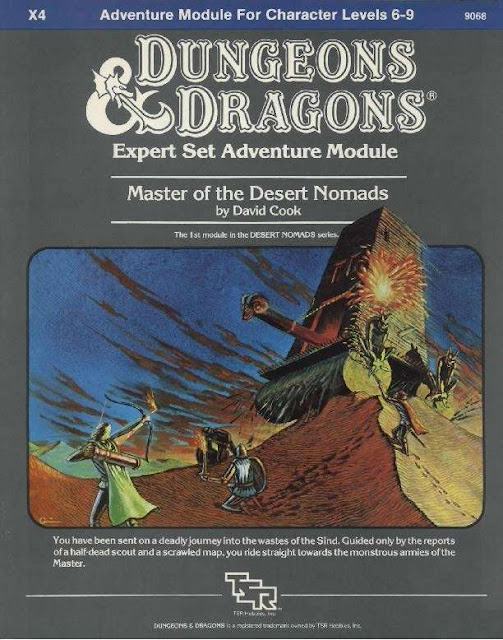 Dipping its sword deep into the sandy soil of cultists, weird desert goings on, & outright weirdness X4 is one part hex crawl, two parts high adventure, & one solid romp into the back part of the Sind erm Diamond desert of Hyperborea. Because this is one of those adventures that can work on multiple levels as it goes from hex crawl to fully formed D&D wilderness romp of the weird. X4 loves to pull out all of the stops on its  toe crawling into the Weird Tales end of things. Connect B6 The Veiled Society & X4 Master of the Desert Nomads and you've got a one way ticket for your party of adventurers to wander right into the back end of no place squared on purpose. 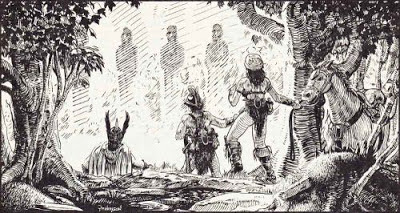 "The village on the border of the Republic of Darokin there is a priest  looking for scouts to seek out the Master a mysterious figure who is uniting the various tribes of humans and humanoids in the Sind desert. The Republic's army forces have already moved out and the PC's are left behind to fill in on this dangerous mission." This is a mid level adventure where Elric in his best mercenary mode wouldn't feel out of place in & neither should your PC's. They're in full 'screwed adventurer mode' dealing with the consequences of mopping up over the spilled blood & guts of a pulpy classic adventure plot device.
The first half of the adventure deals with the PC's journey to the master and the second deals with their handling of an evil abbey which has its own darkness that looks like it came straight out of a Clark Ashton Smith novella. But another option is to hook the plot of X4 into a network of evil where the lich master of the Veiled Society is part of a greater network of undeath horror operating within the bounds of Hyperborea. 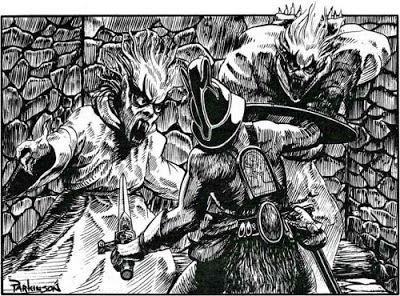 I'm talking about using 'The Master' of X4 Master of The Desert Nomads as a framing device for a campaign. The wastelands of X4 have a number of treasures & relics interconnected to its adventure central plot. Imagine that 'The Master' is in fact another survivor of 'Old Earth' similar to Robert Howard's Skull Face. 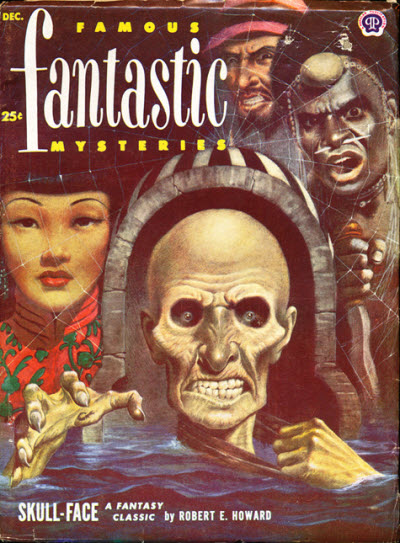 An Atlantian survivor of the worst kind that interweaves with Robert  Howard's Steve Costigan character.
"The story stars a character called Steve Costigan but this is not Howard's recurring character, Sailor Steve Costigan. The story is clearly influenced by Sax Rohmer's opus Fu Manchu but substitutes the main Asian villain with a resuscitated Atlantean necromancer (very similar to Kull's arch-foe Thulsa Doom) sitting at the center of a web of crime and intrigue meant to end White/Western world domination."
There is evidence to suggest that Kathulos might have actually been a part of a secret order of necromancers from Atlantis similar to Clark Ashton Smith's The Empire of the Necromancers. Possibly echoing lost survivors of ancient Atlantis showing up in later future epochs of Earth such as Zothique.
"The legend of Mmatmuor and Sodosma shall arise only in the latter cycles of Earth, when the glad legends of the prime have been forgotten. Before the time of its telling, many epochs shall have passed away, and the seas shall have fallen in their beds, and new continents shall have come to birth. Perhaps, in that day, it will serve to beguile for a little the black weariness of a dying race, grown hopeless of all but oblivion. I tell the tale as men shall tell it in Zothique, the last continent, beneath a dim sun and sad heavens where the stars come out in terrible brightness before eventide." 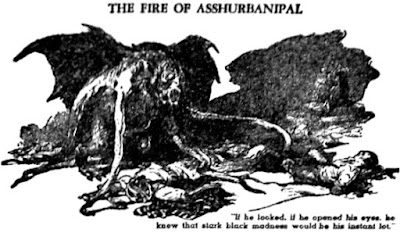 There's some thought & opinions among friends of mine that X4 could be connected to AS&SH's  Ghost Ship of the Desert Dunes as a side quest or vice versa. X4 could also be linked up with Robert E. Howard's The Fire of Asshurbanipal's lost city 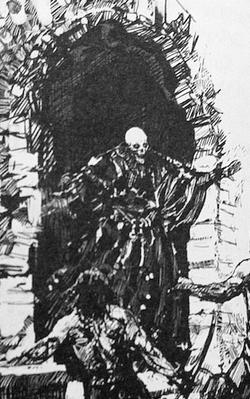 Illustration by Justin Sweet of the Kull of Atlantis character Thulsa Doom.


The attitudes, mannerisms, & goals of many of the living & undead wizards of not only Robert Howard's writing but of the entire Lovecraft circle are overall not only strikingly similar but strangely dovetail into one another.
"Tsotha-Lanti (in the Conan saga) and Kathulos (in the Skull Face novelette); other living or revenant Howardian practitioners of magic such as Thoth Amon, Thugra Khotan, Kathulos and Xaltotun bear some psychological similitudes to Thulsa Doom even if their outward appearance is vastly different."

What this means is that the central themes of dark Sword & Sorcery action from X4 Master of the Desert Nomads might not be an accident at all. This is a module series with a vastly different feel from other Expert Dungeons & Dragons adventures. There could be a vast network of liches & undead moving the strings of events behind the scenes of Hyperborea. In  terms of domain level play it means that there could be a series of shadow wars being played out in the days & nights of Hyperborea. The PC's are none the wiser until they blunder into the events of these shadow wars. At the conclusion of the events of the X series  the Republic of Darokin might well be up for grabs by the PC's but can they hold on to the kingdom and its environs or are there other undead eyes following the PC's rise to power? Because X4 The Master of the Desert Nomads is a mid range module its a perfect module to drop the PC's into the thick of the adventure to help set them up for leveling up to carve out kingdoms of their own.