Sleep is a pathless labyrinth,
Dark to the gaze of moons and suns,
Through which the exile clue of dreams,
A gossamer thread, obscurely runs.
The Maze of Sleep  (1912)
by Clark Ashton Smith 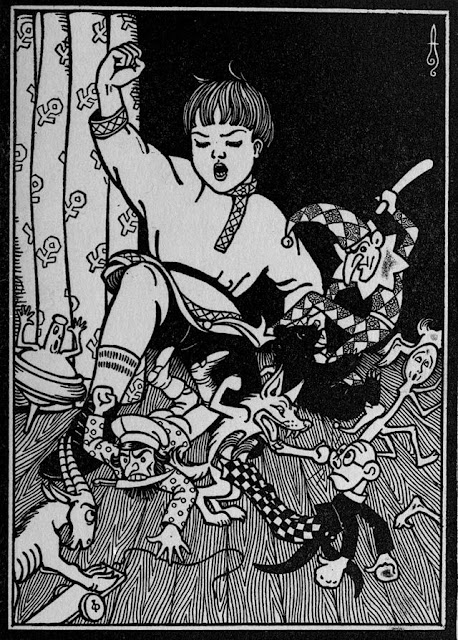 The wizard, shaman, witch or illusionist reaches deep into the realms of dreams & phantasms opening a portal for the least demonic spirits of dreams. 1d12 of them will pour fourth temporarily into the waking world to cause havoc & chaos. They will have 1d3 temporary hit points & be able to attack a target that the caster designates for 1d4 points of damage. These creatures will pull hair, trip anyone they can, & cause as much havoc & mayhem that they can.
Shamans have a natural affinity for these spirits of spite & imagination, they often deal with them when bargaining for passage into the dream worlds to act as guides for the shaman. This spell causes these spirits to have passage and free reign in the waking world something relish to cause as much weirdness & chaos as possible.
There is a 30% chance of a PC tripping over an object or obstacle that has been left behind by the activities of these spirits. There is a 4% chance that a gremlin spirit may take special interest in one of the PC's and single them out for torment. Rumors of Hyperborean children using a variation  this spell to summon wicked play mates may only be nasty rumor. This spell is often used to summon distractions & nuances of the highest caliber.

Brui Enru The Boy Wizard of Oralatha
who created The Summon Gremlins of Nightmare spell & was later consumed by a demon of Nightmare of the sixth circle.

There is a 70% chance that the entropic energies of the Gremlins of Nightmare will infect any complex machinery within the area of effect even after the gremlins disappear in puffs of doubt & reality. Further there is a 5% chance that a demon of nightmare from 'the Greater Depths of Nightmare' may come forth the portal that this spell creates. Such entities must be controlled or cowed into submission with Charisma & Wisdom contests with such entities. If ten or more Gremlins are present they may try to possess someone within the area of the spells effects.