"Echoing foot falls sounded through the dusty canyon of the old mountains, older then when life had paid its tax to the universe. These rocks throbbed with occult energies beyond the ken of man's knowledge. For the three wizard's apprentices it just might become their graves. They had awoken something ancient, mean, & evil. Now it wanted their hides!
"Do you see it?"
"No but I can feel it, you didn't see those pits it had for eyes!"
"Shut up & run!" The words weren't spoken so much as croaked out of the throat of the poor fool.
"Can't do that I must turn back. He calls me. Can't you hear his voice", & with heavy foot falls the former wizard's apprentice turned & trudged the five miles back to the barely tumbled down pile of rocks & stone that might be ruins.
There were hoof beats approaching closer but in a lazy almost casual fashion. The flanks of the creature had almost horse like outlines but the black energies that passed for not flesh were incredibly alien. Their merest outlines hurt the eyes.
They left the poor fool there.When the thing crested the hill as the others had long since left. Black energies coiled out of what was once centuries maybe a thousand years ago a humanoid skull. The thing was majestic & the definition of evil in the rusted old armor, the weapons though were lovingly oiled, the leather bits worked with care. But that demonic horror seated on the back of a mockery of a horse was not even remotely human. Its eye sockets gleamed with energies from the deepest pits of a nether universe where dead stars gleamed around the souls of the damned.
Urine rain down the leg of the apprentice as his will had long since faded as soon his life would. His soul belonged to the thing on the hillock not far away. What might have been mistaken for a smile crossed the countenance of the thing but it was only the moonlight gleaming off of the bones that pulsed with alien energies. A hand began to work the lovingly tendered sword & its side" 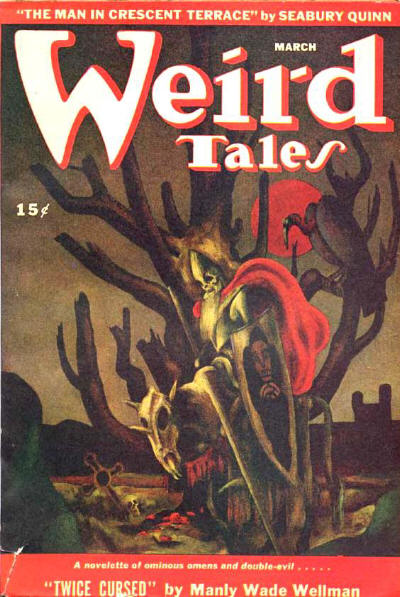 The wastelands & graveyards of the dead are the fields & cities of the living, there are countless dead that do not rest easy in their graves. But there are far more alien things waiting in these places for PC's! The dead don't rest easy & don't want to give up their grip on reality, as they hunger for the life & souls of the living. Darker & far more sinister things fuel the lives of these monsters & there is a hunger that is never satisfied. 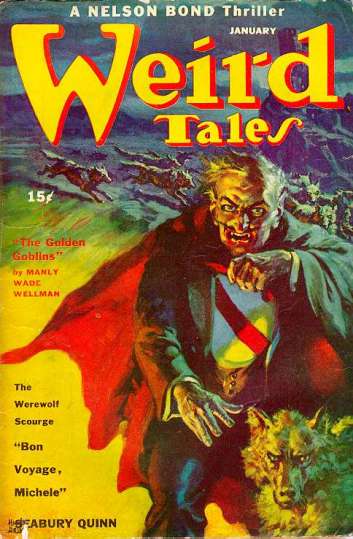 These dark thirsts summon demons & worse from the depths of the underworld to drag these horrors back down to the darkest depths. Dungeons, ruins, & other far more sinister place call to these horrors & PC's are the easiest prey for these monsters. 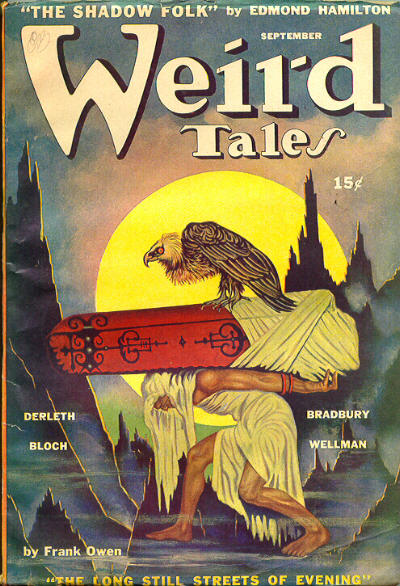 Cover of the pulp magazine Weird Tales (September 1944, vol. 38, no. 1) featuring The Long Still Streets of Evening by Frank Owen. Cover art by A. R. Tilburne.


1d20 Random Deadly Sword & Sorcery Encounter Table
With The Royalty of Undeath
Posted by Needles at 11:04 AM