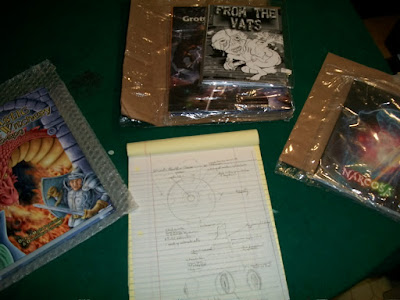 Right so this game picks right up after the 'Encounter At The Space Port' session of Fantastic Heroes and Witchery. I didn't get back until someplace around one a.m. or so. Good games always last about that long if they're good ones.  The PC's have been dealing with a Elven temple of  Law based around the brood father of C'harl on the street of ancient deities right down the road from a temple of Zeus.A group of  Elven warriors, scouts, and mercs were rushed into the temple after almost being completely slaughtered leading a group of outworlders to the abandoned wizard's tower. 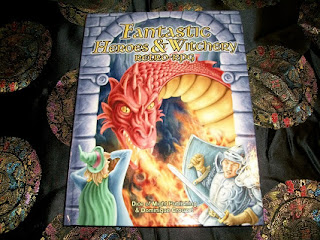 The setting for this is the edge of the former Russian Collective States now the home to the new  Tartar Empire. One of the world's largest still functioning space ports sits here smack near one of the most dangerous deathlands in the world of Accursed Atlantis.
This all dovetails in with my Warlord of The Outer Worlds campaign. So the PC's in last night's game get to an 'abandoned' multi-dimensional murder tower with seven levels. The place has an angel trapped in the top floor and the PC's figure that they can use it too disrupt the sale of the Elven slaves from Neo England. 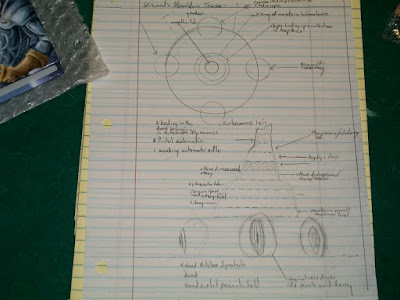 The problem is that the tower was already broken into by a team of  East German mercenaries from Ritcher Dynamics from my DCC Crawling Under A Broken Moon crew game, the party in that game barely escaped with their lives and locked the tower behind them. That's a blog entry for another time.
The party made it passed the entrance and into the bodies of the Ritcher Dynamics mercs. Spines shattered and protruding from their armored suits, blood, guts, gore, and more all over. There were pistols,machine guns, etc. smashed, shattered and very little for salvage. 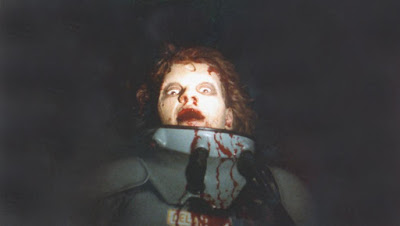 They carefully proceeded down into a secret tunnel beneath the entrance and into the belly of the tower only to be confronted by an demonic alchemist's lab. Part Dr. Frankenstein/ part alchemy lab from hell, this place stunk of sulfur, blood, and acid. A demonic tormentor was leading a wounded demon warrior of his from the last game adventure into the lab to help heal and sew his wounds. The FH&W party hid very quick and once the wounded warrior was on the slab it was very apparent that the tormentor demon wasn't alone. He had a pet with him named 'Cedric' a six armed two headed demonic pet that was a 6th level priest of a lower demonic power.  All hell broke loose as a fire fight broke out in the lab, several low level magic items were consumed and at the end it the party managed with some very lucky rolls to banish the tormentor and pet back to their holding configuration. 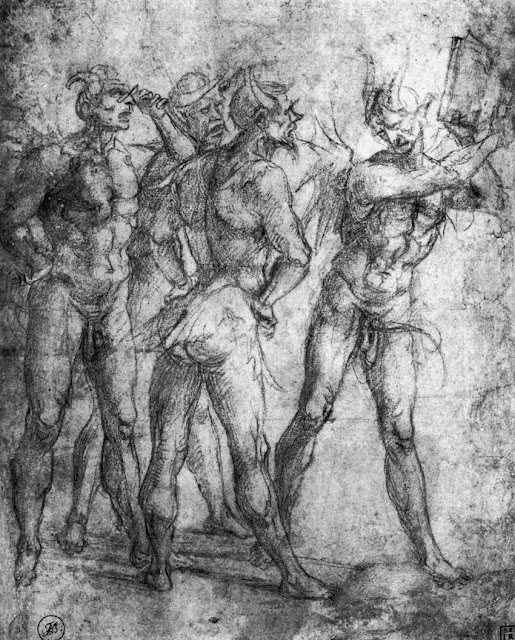 After licking their wounds and checking ammo, the PC's moved on to the next room. But this encounter was way beyond their level. I didn't think that the players were going to attack a minor demonic entity like this one but they did and with several natural twenties the got very, very, lucky. The melee took up a good portion of the evening and more as play moves forward.
Rereading this entry there were several key events that happened during the game: 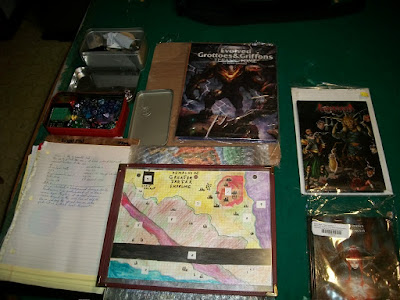