Continuing my rambling about Vornheim the Complete City Kit today from the weird and wonderful Lamentations of the Flame Princess label. Vornheim is being release or has been released as a physical book. This second article is in reference to the sixty four page pdf, and my history with the book. Have I used it in the past? Yes but not as much as I should. So here are some of my thoughts about Vornheim.
Vast is Vornheim, The Grey Maze…
…but I'm not here to bore you with that. This book is not about Vornheim, it’s about running Vornheim – or any other city – in a fantastic Medieval setting. And about running it with a minimum of hassle – so you and your players can get to the good stuff…That’s why we called it a ‘Kit’ – you can use it to build your own city, even in the middle of a game. Give somebody a floorplan and they’ll GM for a day – show them how to make 30 floorplans in 30 seconds and they’ll GM forever. 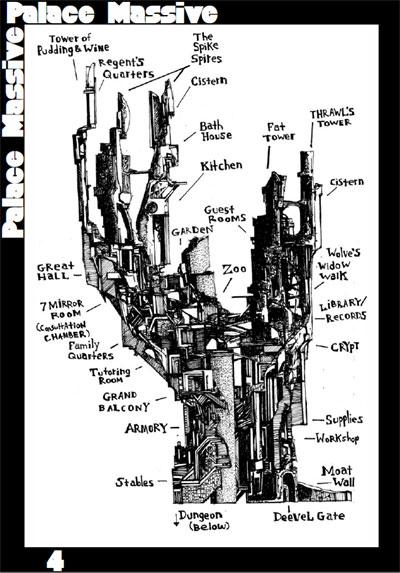 So back in 2011 Carcosa spawned itself into my life by Geoffrey McKinney and made quite the impression, but Vornheim came out around the same time and is now back in print as a physical book. I've had the pdf in my Drivethrurpg account for years and when the physical book was announced I went back and dusted off the pdf which has been updated. Vornheim was written for the Lamentations of the Flame Princess rpg but it can be and should be used for any rpg system. This includes both new and old, it also brings up one of my pet peeves with many of the Lamentations Princess products. The veneer of hype that surrounds their products I personally think hurts their reputation, sure they've won awards, have a very solid fan base, Zak Smith is genus writer/designer, etc.,etc., ad nausea. The fact is that none of this should keep you as a dungeon master away from Vornheim or for that matter any of the Lamentations of The Flame Princess line of products. 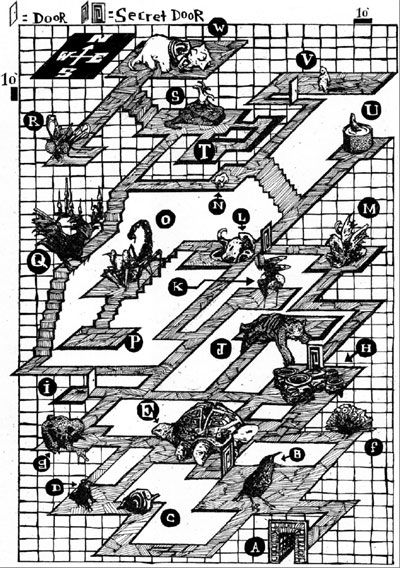 But let me go on record as say screw all of the above because the only thing that you and your players are going to be caring about a 2:00 am in the morning is what pray tell is going to be eating your PC's face in the Immortal Zoo of Ping Feng or one of the other adventures in Vornheim. That's one of the things that makes this product highly accessible. The fact that with a quick dice drop you can randomly generate any number of incredible and improbable events, people, nobles, and weird stuff that can crop up in the encounter tables of an urban or sprawl crawl on steroids. The monsters like the setting are unique and very dangerous in their own rights and there are personalities that will take the legs out from under your adventurers and comeback for more.  The Chain are a pair of homonculi contract killers who make the puppet men from my nightmares look like marry sunshine, you've got the The Witches who wish to summon demons to over throw humanity, and the list goes on and on. Vornheim makes some of the most efficient use of  dice drop tables, encounter tables, tables for the towers and more.

Vorheim has one of the only adventures in it that I love about libraries, the Library of Zorlac is like the antithesis of let's avoid the book adventures. This one will have PC's running around collecting book and trying to avoid the things trying to kill them. Sounds like a typical D&D adventure, nope the author is clever enough to inject his own brand of weirdness into and let me tell you its weird and unique. A note about Vornheim itself, the artwork that the author and artist lays down is another character in the feel of the city setting itself. This is pretty much the heart and soul of the setting or is it? 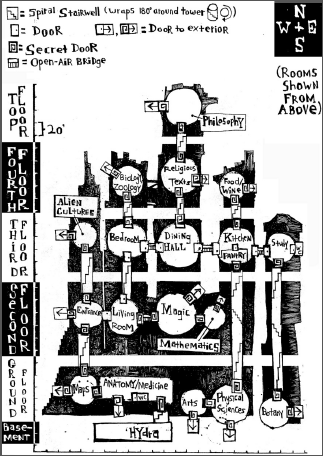 Vornheim is only sixty four pages but its as unique and dense of a setting as Sigil or some of the other urban campaign settings out on the market today. And I've skipped over the Wyvern and its well and many of the other sights and things of Vornheim on purpose. Because as we dive into the back of the book we get into the heart and soul of the author's creation. See Vornheim hasn't been written about running Vorheim, its been written about running your Vorheim as a campaign. The product is as much about the essence  as it is about the process of coming up with your own urban/sprawl hex crawl. There are page after page of tables that prove and provide this for your PCs.

Bottom line is Vorheim worth your time and coin? Yes I think that it is and do I want a physical copy of the book? Sure but that's not going to happen anytime soon for me because I can't afford it at the moment but its definitely on my list of books to grab.

Email ThisBlogThis!Share to TwitterShare to FacebookShare to Pinterest
Labels: Commentary On Vornheim The Complete City Kit From Zak Smith & The Lamentations Of The Flame Princess Rpg For Your Old School Campaigns